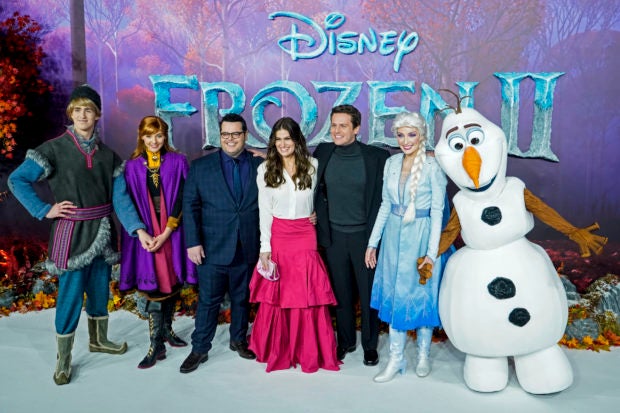 Josh Gad (3rd L), Idina Menzel (C) and Jonathan Groff pose with people dressed as characters from the film on the red carpet as they arrive to attend the European premiere of the film “Frozen 2” in London on Nov. 17, 2019. Image: AFP/Niklas Halle’n via AFP Relaxnews

The animated musical, which has Queen Elsa (voiced by Idina Menzel) and the gang traveling to an enchanted forest, took in an estimated $34.7 million for the Friday-through-Sunday period, boosting its domestic total to $337 million and its global take to $920 million.

That lifted Disney’s global ticket sales for 2019 past a record $10 billion, according to Hollywood Reporter.

In second again was Lionsgate’s murder mystery “Knives Out”, at $14.2 million for the weekend. The film stars Daniel Craig — a detective with a droll, over-the-top Southern accent — Jamie Lee Curtis and Chris Evans in an Agatha Christie-worthy tale that critics have called “deliciously entertaining.”

In third was Fox’s “Ford v. Ferrari,” at $6.5 million. The film, based on a true story, tells how a team at Ford built a car to challenge Ferrari’s dominance of France’s classic 24-hour Le Mans race. Matt Damon and Christian Bale star.

Universal’s “Queen & Slim” placed fourth, taking $6.5 million. Daniel Kaluuya of “Get Out” fame and Jodie Turner-Smith, a British-born model and actor, play an African-American couple whose terrible first date turns even worse when they have a disastrous encounter with a racist cop.

And in fifth was Sony’s “A Beautiful Day in the Neighborhood”, taking in $5.2 million. The drama recounts the true story of how a cynical and distrusting journalist is befriended by beloved TV star Fred Rogers, played by Tom Hanks.