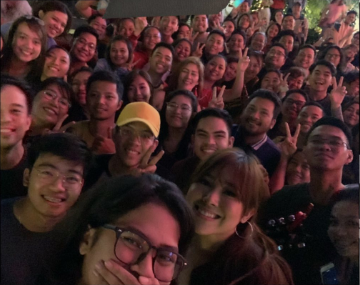 Moira Dela Torre together with her fans in an impromptu gig. Image: Instagram TV/@moirarachelle

Singer Moira Dela Torre made one lucky busker’s night when she performed a duet with her on her makeshift stage.

A certain @trinamorata or “TJ” got the surprise from Dela Torre and her husband when they all together ended up singing some of Dela Torre’s hit songs such as “Tagpuan” and “Ikaw at Ako”.

The singer-songwriter narrated that she was out having dinner with her husband, Jason Marvin Hernandez when they heard the busker singing. Dela Torre posted about the encounter on Instagram TV yesterday, Dec 8.

Dela Torre stated that it was a different kind of feeling to hear her songs being performed by someone else. TJ was singing “Tagu-taguan” when Dela Torre approached her and dropped some change in her guitar case. After her performance, they cheered the busker. TJ then noticed the singer as one of her audience.

“And dami niyang napasaya kagabi (She made a lot of people happy that night),” Dela Torre said. “Isa na ‘ko don (I’m one of them).”

Dela Torre serenaded the small crowd that gathered for their little impromptu concert, while TJ played guitar. Hernandez also took part in the performance of their wedding song, “Ikaw at Ako”. The busker gave her own take on the soothing love song as she sang some parts of it until the end.

“What a great way to end the year,” Dela Torre said.

Dela Torre also gave the budding performer some words of encouragement, then expressed her gratitude for the experience.

“You are stronger and braver thank you think. I’m so thankful to have met you,” Dela Torre said.

Dela Torre tied the knot with her fellow musician Jason Hernandez in a garden wedding in Tagaytay City earlier this year. JB

Moira on new singers wanting to sound like her

LOOK: Moira and Jason tie the knot in garden wedding