SAN FRANCISCO – Two opera singers who accused Placido Domingo of sexual misconduct said Tuesday that it was disappointing and disturbing that the opera legend recently claimed he has always behaved like a gentleman and never acted improperly toward women. 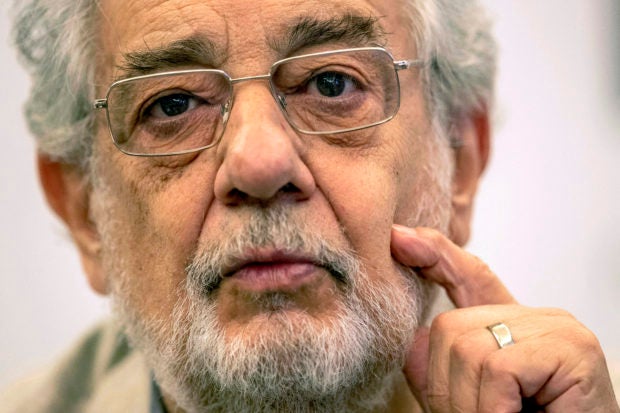 FILE – In this July 12, 2019, file photo, opera singer Placido Domingo speaks during a news conference about his upcoming show “Giovanna d’Arco” in Madrid, Spain. Two opera singers who have accused Domingo of sexual misconduct reacted angrily to his claims in recent interviews that he never behaved improperly and always acted gallantly and like a gentleman with women. Angela Turner Wilson and Patricia Wulf issued a statement Tuesday, Dec. 3, 2019, saying they found Domingo’s comments and his “continued failure to take responsibility for wrongdoing” to be disappointing and deeply disturbing. (AP Photo/Bernat Armangue, File)

Angela Turner Wilson and Patricia Wulf were among more than 20 women who accused Domingo of sexual harassment or inappropriate sexually charged behavior in two Associated Press reports this summer.

Their new statement came in response to comments Domingo made in two recent interviews with European publications, in which he disputed the allegations against him and said he never abused his power. He said he always behaved like a gentleman but that “gallant gestures are viewed differently nowadays.”

“There is nothing ‘chivalrous’ or ‘gallant’ about groping a woman in the workplace, in any country or era,” Wilson and Wulf said in the statement issued through their attorney, Debra Katz.

The Grammy Award-winning singer is one of the most celebrated and powerful men in the opera world and regarded as one of the greatest opera singers of all time. The long-married, Spanish-born star also is a prolific conductor and longtime administrator, having served as the general director of both the Los Angeles Opera and Washington Opera.

Until recently, the 78-year-old had not spoken publicly about the allegations and had limited his reaction to statements from his lawyer and publicist. He had called the accusations “in many ways, simply incorrect.”

Last week, Domingo gave an interview to Spanish online newspaper El Confidencial in which he again stopped short of flatly denying the women’s allegations but insisted he had never behaved improperly. He added that Spaniards are by nature “warm, affectionate and loving.

“I have been gallant but always within the limits of gentlemanliness, respect and sensitivity,” he said.

Domingo also spoke to Italian newspaper Corriere della Sera, denying he abused his power and saying casting decisions were not made by him but by “a team of four or five people.” He said that “very offensive things were said about me as a human being.”

Domingo’s statements and “continued failure to take responsibility for wrongdoing or to express any remorse is extremely disappointing and deeply disturbing,” Turner and Wulf’s statement said.

“He did not behave like a gentleman when he repeatedly propositioned women for sex in the workplace … and when he groped them and kissed them over their objections,” the statement said. “He did not behave respectfully when he offered to assist with the careers of aspiring female opera singers if they came to his apartment and had sex with him.”

The most serious allegation lodged against Domingo came from Turner, a soprano, who told the AP that he forcefully grabbed her breast in a makeup room at the Washington Opera in 1999 after she rejected his advances for weeks.

Wulf, a mezzo soprano, said Domingo persistently propositioned and harassed her during performances at the Washington Opera in 1998, when he was general director.

Another singer said when she worked with Domingo at the Los Angeles Opera in the mid-2000s, he stuck his hand down her skirt after asking her to sing for him at his apartment. Others said he forced wet kisses on their lips.

U.S. opera houses canceled Domingo’s upcoming performances following the accusations, and he resigned from the LA Opera, where he had been general director since 2003. It’s investigating the allegations.

European theaters have supported Domingo and maintained his appearances.

“It is deeply upsetting and unfair that Mr. Domingo can retreat to another world without having to come to terms with what he has done to many, many women here,” Wulf said.

The women’s statement said Domingo’s comments show an attempt to absolve his misconduct by blaming cultural differences and changing rules and standards.