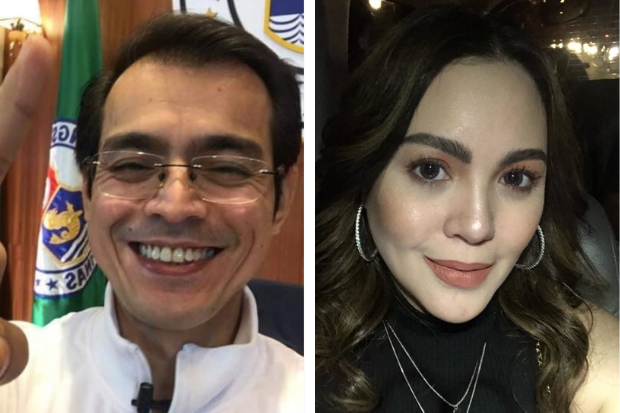 Isko Moreno denies having been in a relationship with Claudine Barretto. Image: Instagram.com/@mayoriskomoreno, @claubarretto

Former actor and Manila mayor Isko Moreno has made it clear: he had no romantic relationship with former co-star Claudine Barretto.

Moreno denied even having tried to at least go out with Barretto, after the mayor was coaxed to speak about their supposed love story, during an episode of “Gandang Gabi Vice” yesterday, Dec. 1.

(What would you do if Gretchen, Marjorie and Claudine fought in front of you? How will you work things out between them?)

(You better answer properly, because I heard Gretchen and Marjorie almost became your in-laws.)

Before Moreno could answer, however, Vice followed with the “real” question: “At naging mag-jowa ba talaga kayo ni Claudine noon?”

“With due respect to Ms. Claudine Barretto, hindi naman,” Moreno answered. “We were partners in movies and we belonged to one film outfit, which is Seiko Films.”

Vice then asked if Moreno tried to even court the actress, to which the mayor replied: ” “Hindi eh, nagbigay ako ng bulaklak kasi sinabihan ako ni boss Robbie [Tan] (No, I only gave her flowers because boss Robbie Tan asked me to).”

Moreno also said one reason he did not ask Barretto out was that he felt insecure, saying “medyo maayos naman kasi ang buhay nila (because she had quite a wealthy life).”

But mayor admitted that he got to hold hands with Barretto for a movie, although they did not kiss because the film “had no kissing scene.” Vice then asked if they kissed after the movie, but Moreno quickly answered, “Alaws din eh (Also a negative).”

Vicki Belo appeals for help for Cotabato: ‘We’ll see this through’