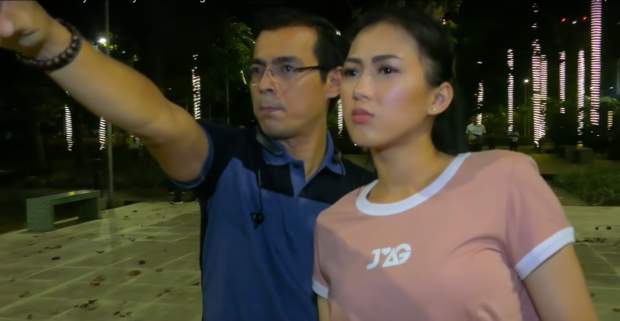 Alex Gonzaga explored Manila with its mayor, Isko Moreno, as her tour guide. It turned out to be a tour filled with humor and a glimpse of the city’s nightlife.

The actress, who documented the tour in her YouTube vlog last Sunday, Oct. 27, got the chance to see the new and improved Mehan Garden. Alex was also able to do a flash raid of the mayor’s car and bag, and engage the mayor in a Q-and-A.

“Yorme for mayor,” Gonzaga said. “Ano bang gusto niyong tawag sa inyo (What do you like people to call you)?”

“Kahit ano, kung ano ang gusto ng tao (Anything, whatever the people want [to call me]),” the mayor replied.

Gonzaga experienced Moreno’s “jeprox” humor, as he inverted words and used street lingo. The mayor also shared his insights on good governance. The two talked about Manila’s clearing operations and raids, as Alex asked about the mayor’s habit of doing raids at night.

The mayor answered by saying some people think the government is inactive during the evening, which is exactly why he makes the effort to prove that they are active for 24 hours, he explained.

Gonzaga also jested that if he wanted cleanliness in Manila, maybe he should start with the back of his car, as the vlogger noted the pile of clothes in the mayor’s trunk.

During Alex’s inspection of Yorme’s belongings, she also got to see the mayor’s paycheck, which bears the amount of a little over P122,000.

Other highlights of the tour included Mayor Isko pointing out new architectural landscapes while in Mehan Garden. The two even peeked at the park’s restroom, then had a picture-taking moment with Gonzaga’s boyfriend, Lipa City councilor Mikee Morada. Gonzaga ended her tour with Yorme by having their own take at “pagpag,” leftover food they ate in the park. JB