Indie Bravo! Awards 10th anniversary a celebration with a twist 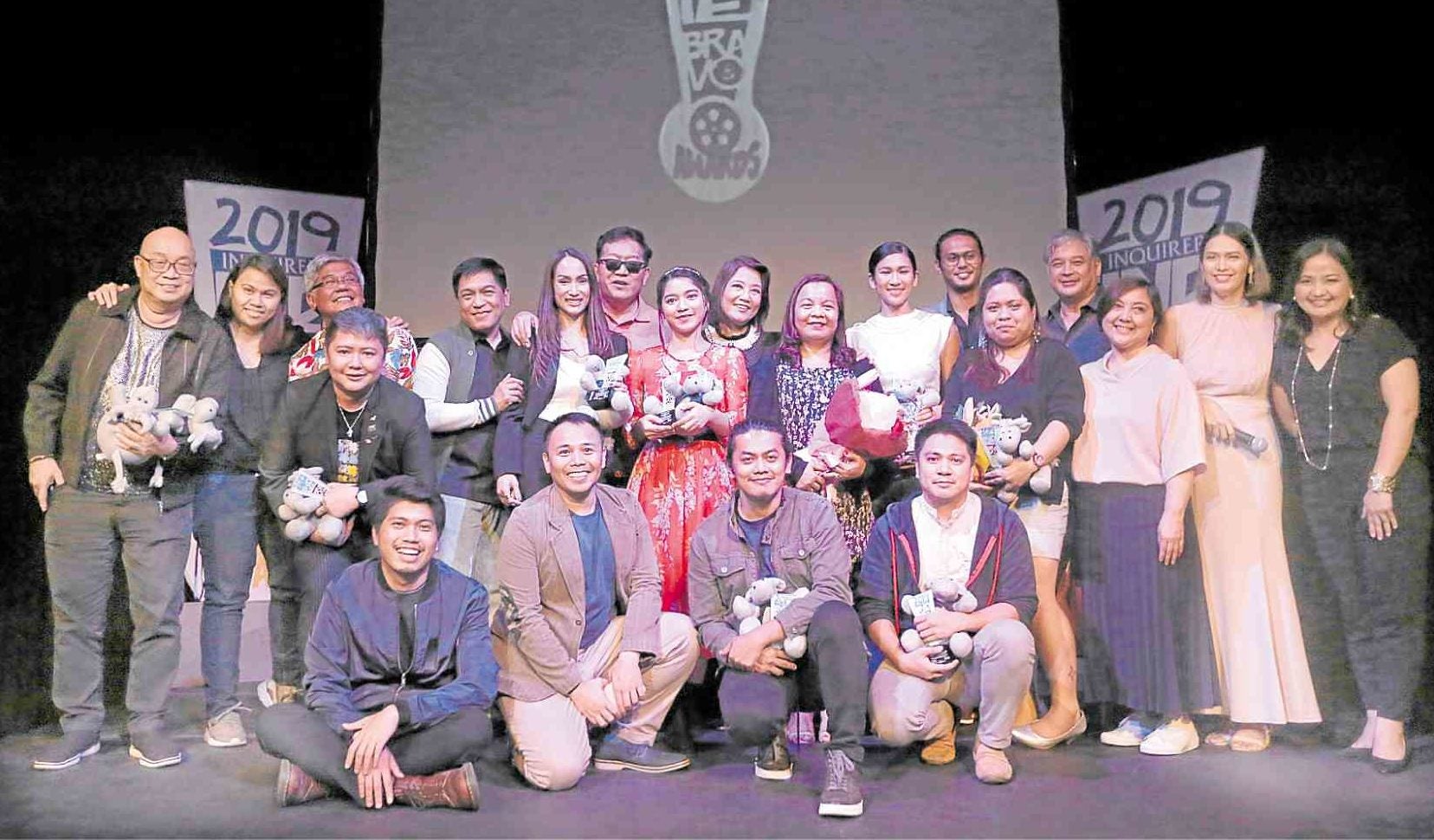 The Indie Bravo! Awards, an annual ceremony organized by the Inquirer to pay tribute to indie film artists who brought honor to the country by winning at international film festivals, turned 10 this year.

“The Inquirer has become instrumental in the acceptance of indie filmmaking as an industry in the Philippines,” added filmmaker Paolo Villaluna, president of the Directors’ Guild of the Philippines Inc. (DGPI).

The two, along with Ed Lejano and Lilit Reyes, officials of film festivals QCinema and Cinema One Originals, respectively, participated in a panel discussion during the three-hour Indie Bravo! Awards ceremony. 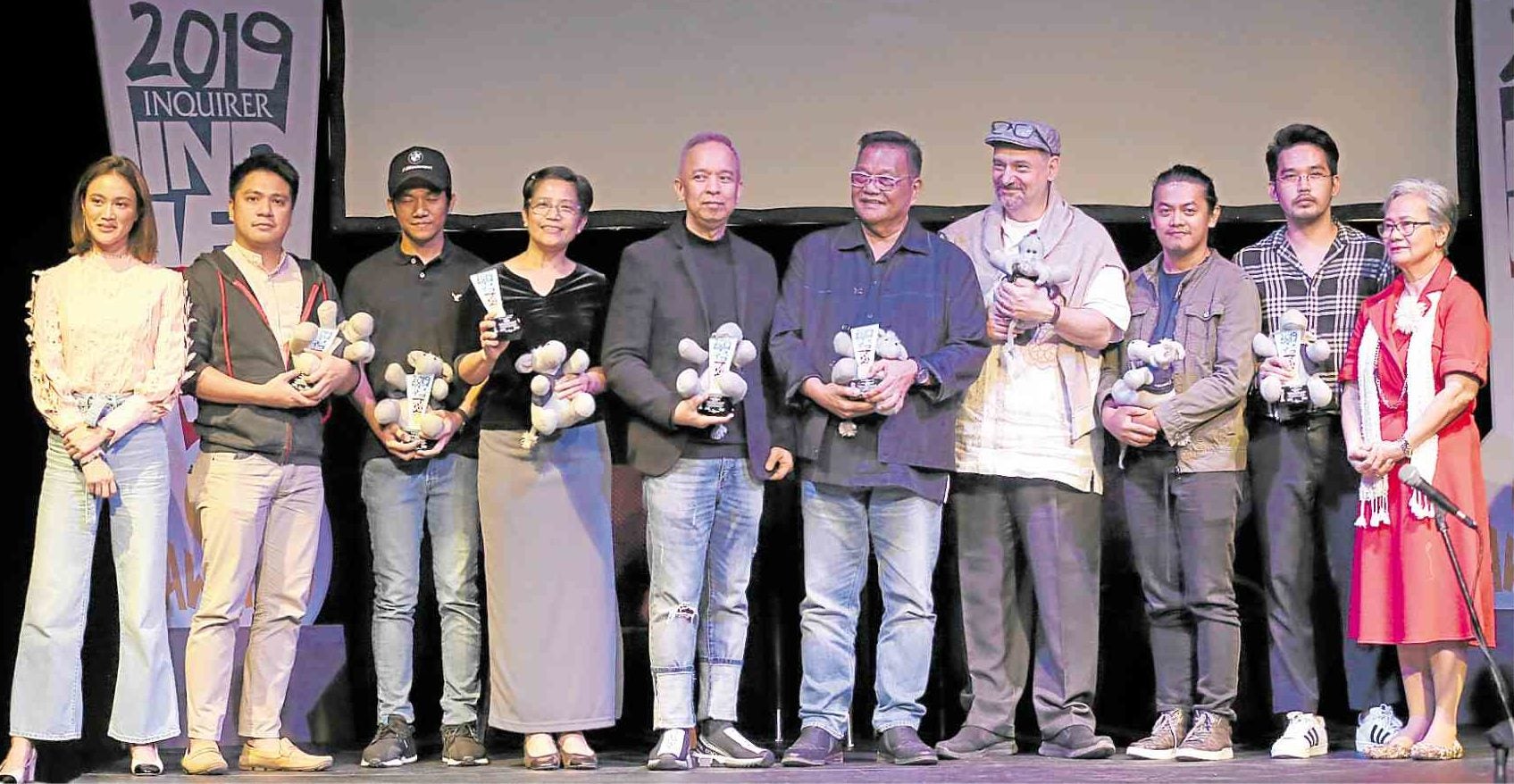 Ed said that while the industry is currently in a “sweet spot”—what with so many indie films being made, film grants being handed out and job opportunities being given—we also have to address the fact that not all films are making money.

“These questions arise: Is theatrical release still important? Or should we just go straight to other platforms? What options are in store for our filmmakers?” Ed asked. “It’s up to the filmmakers to grasp the opportunities and face the obstacles.”

Madonna said she was well aware that there were naysayers. “A lot of people say there are too many festivals in the Philippines, but I look at it as having a lot of opportunities or venues for artists to express themselves,” she pointed out. “First-time filmmakers don’t always get the chance to pitch their stories to producers, but through these festivals, they are given that opportunity. This opens doors for everybody because, we don’t just discover filmmakers, but also producers and actors.” 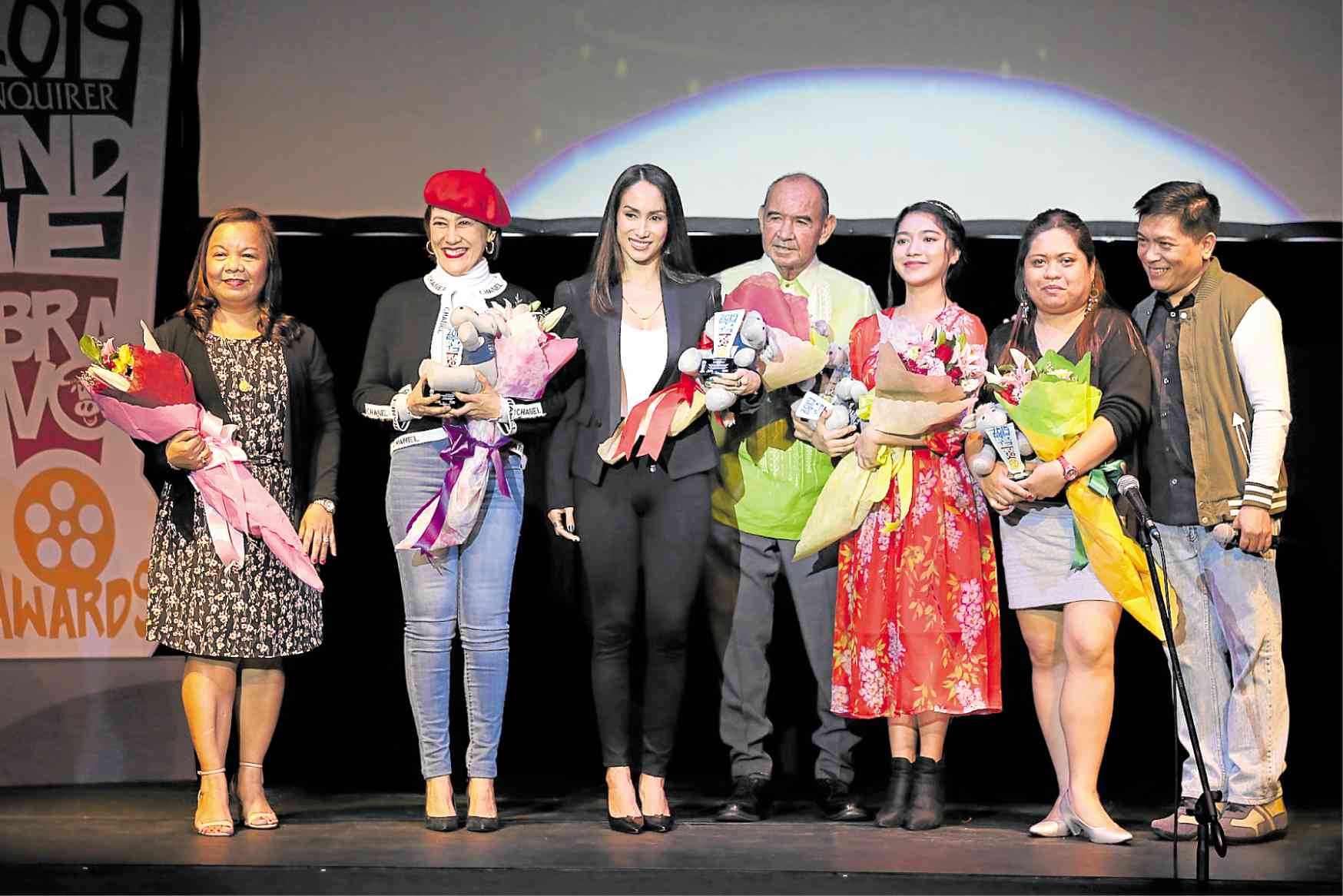 Ed discussed the impact of new media in the industry. He said there’s a “live streaming war that’s coming,” not just with the emergence of Netflix, but also with the fact that Apple, Warner, Disney and Hooq are now all churning out new content. On the local front, there’s also the different live-streaming platforms like iWant and Cignal.

“We’re talking about the drastic and ever-changing options in getting your content out there. This is the future,” he pointed out. “In ‘Blade Runner,’ the year 2020 was its vision of the future. This means that we are the future now.”

Lilit said that with the new technology, telling stories through film has become more doable and accessible. “There’s more sustainability with digital filmmaking. I know a lot of my contemporaries who are making money because of iWant or Hooq,” he shared with the audience. “The other wish is for us to have something like ‘Parasite,’ which is a global hit and at the same time a big winner at a [top] international film festival.” 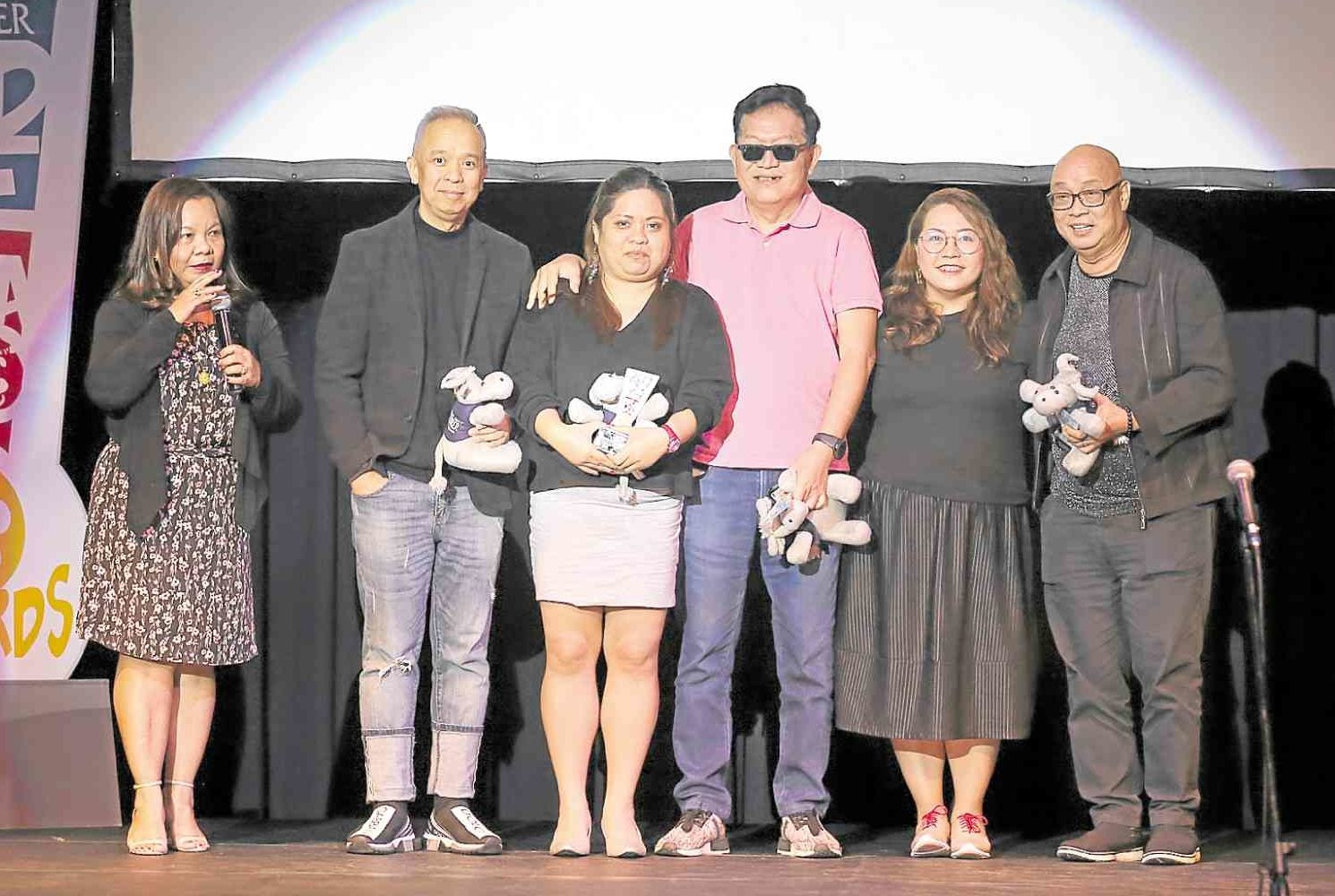 Lilit was talking about the Bong Joon-ho film that won the Palme d’Or at the prestigious 2019 Cannes Film Festival in France. It is the first Korean film to have received the highly coveted award. Meanwhile, online reports also said it earned $121.8 million at the box office.

Paulo looked back to 1999, when he said he first experienced change in local filmmaking. “Back then, cinema was dying because film was fast becoming an obsolete format. Digital filmmaking was emerging,” he recalled and then proceeded to describe 2005 as “a watershed moment … There were a lot of digital films being made—and they were good films. Suddenly, there was a celebration.”

For Ed , while it’s good to be optimistic, “one must also be realistic.” His advice to filmmakers: Package your projects clearly.

“Is it for mainstream or for indie, for ‘maindie’ or for the festival circuit? The presence of big stars does not translate to automatic box-office success. The absence of stars, however, does not prevent you from making a hit. These are things that have to be strategized clearly on the onset,” he pointed out. “Should we make a P200-million movie like ‘Heneral Luna?’ Maybe that’s a fluke, but is it repeatable? They say ‘Kita Kita’ is the model for indie sleeper hits. Is it repeatable?”

Ed further advised: “When you want to show a film out there in the market, you have to make a buzz. Can you create buzz? Sometimes, it’s a phenomenon and happens by itself. So be realistic and know your target.” 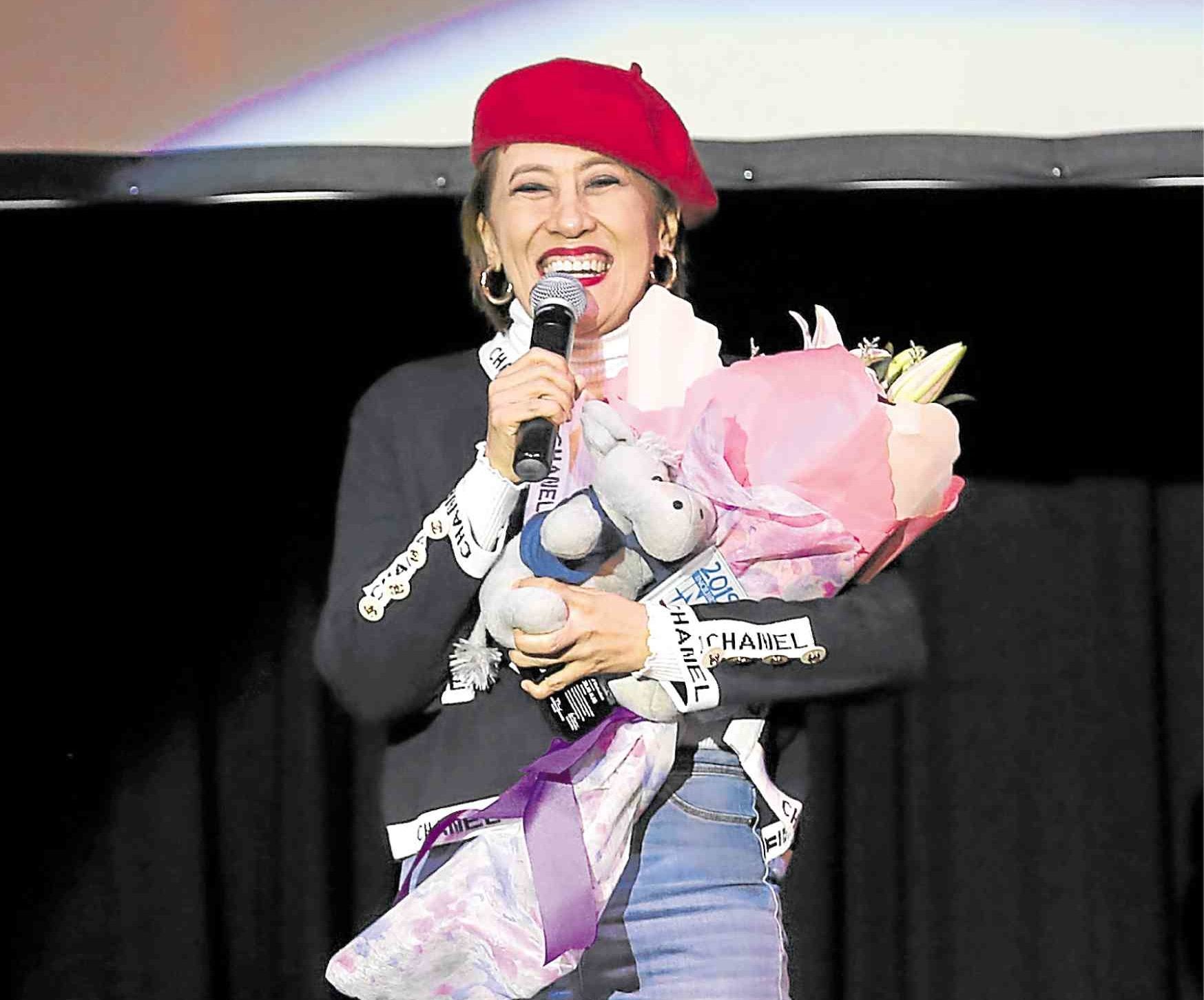 As in its previous editions, this year’s batch of honorees was a mix of first-timers and repeat winners.

Louie Ignacio now has five trophies and Guyito stuffed animals. “But still I get excited about it,” he said.

Mac Cosico revealed that it was actually his first time going onstage to receive an award. “I was so nervous!” he admitted.

Because two-time Indie Bravo! awardee Barbara Miguel has never had the chance to accept any of her international awards personally, attending the Inquirer event was the next best thing.

“I’m so thankful I was given a platform to show the rest of the world what’s going on in our country,” she said.

Barbara, the youngest honoree at age 15, said receiving the Indie Bravo! trophy gave her and her mom, Rich Ocon, a reason to fly back to Manila. She had been vacationing with the family in Davao City.

The moment first-time Indie Bravo! honoree, Ina Raymundo, arrived at the venue with her manager Paula Punla, she made sure to ask us questions about what kind of award she would be getting and what she should say in her speech. 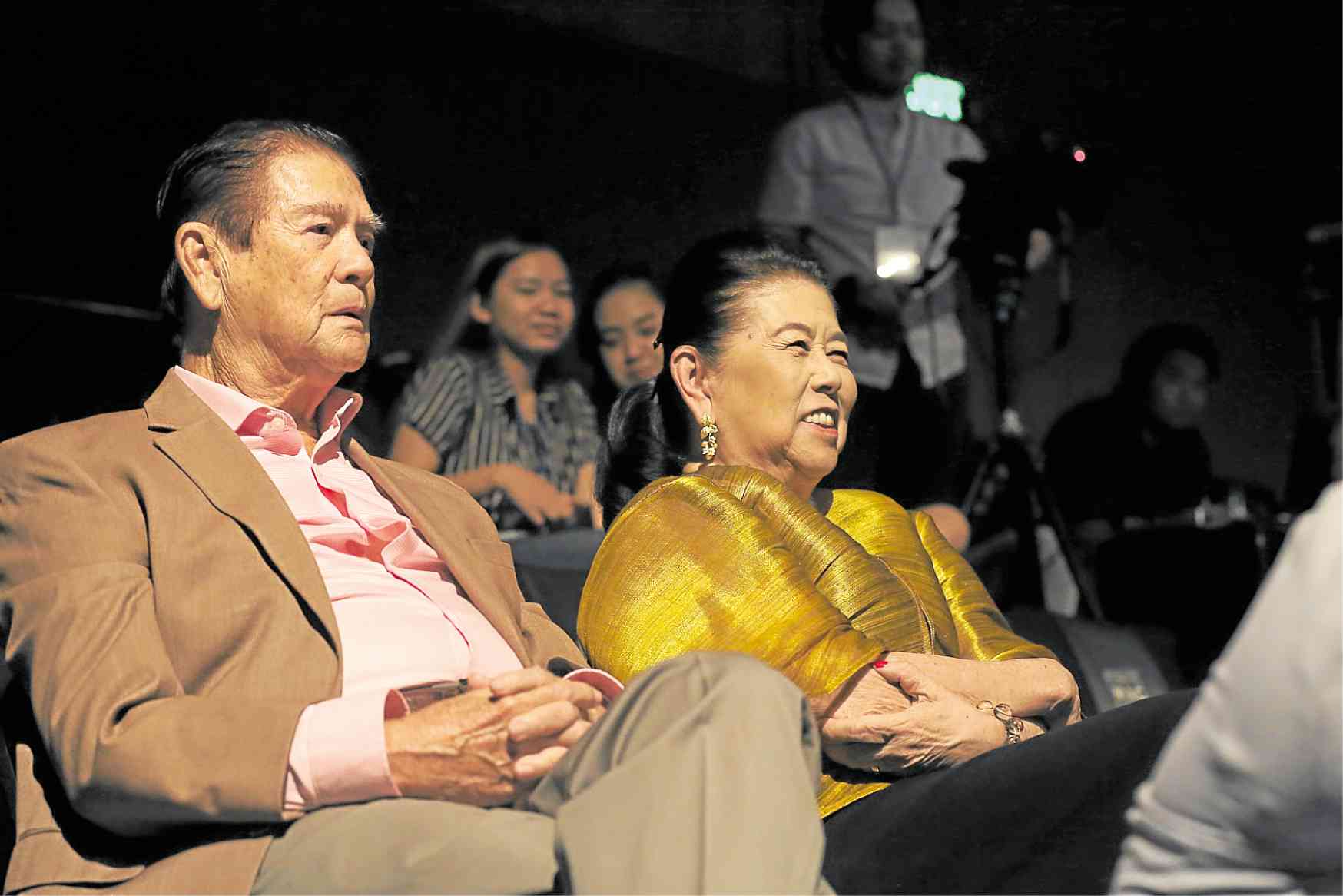 “I feel so very blessed and thankful,” Ina said.

Another first-timer, veteran actor Dante Rivero (for “Paano Hinihintay ang Dapithapon?”), who looked dapper in his mint green-colored barong, drove all the way from his home in Pampanga to attend the show.

Ai-Ai delas Alas wore a beret, thinking her international award was from a French festival. “Ay, sa Portugal pala ako nanalo!” the two-time Indie Bravo! Awardee quipped, drawing laughter. “This is for my children who are my sources of strength, and to my husband, who’s always there for me,” she said.

In her acceptance speech, Hong Kong-based actress Crisel Consunji related that one time during a screening of her film “Still Human,” people went up to her not to congratulate her for her work as an actress, but to ask how long she had been working in Hong Kong as a domestic helper.

“But it’s not something to be ashamed of,” stressed Crisel, who won best new performer at the 38th Hong Kong Film Awards and best new actress at the 13th Hong Kong Directors’ Guild for the said movie.

“We, Filipinos, come from different backgrounds and have different stories. We have very rich stories and heritage. And now is a great time to share them with the rest of the world,” Crisel said. 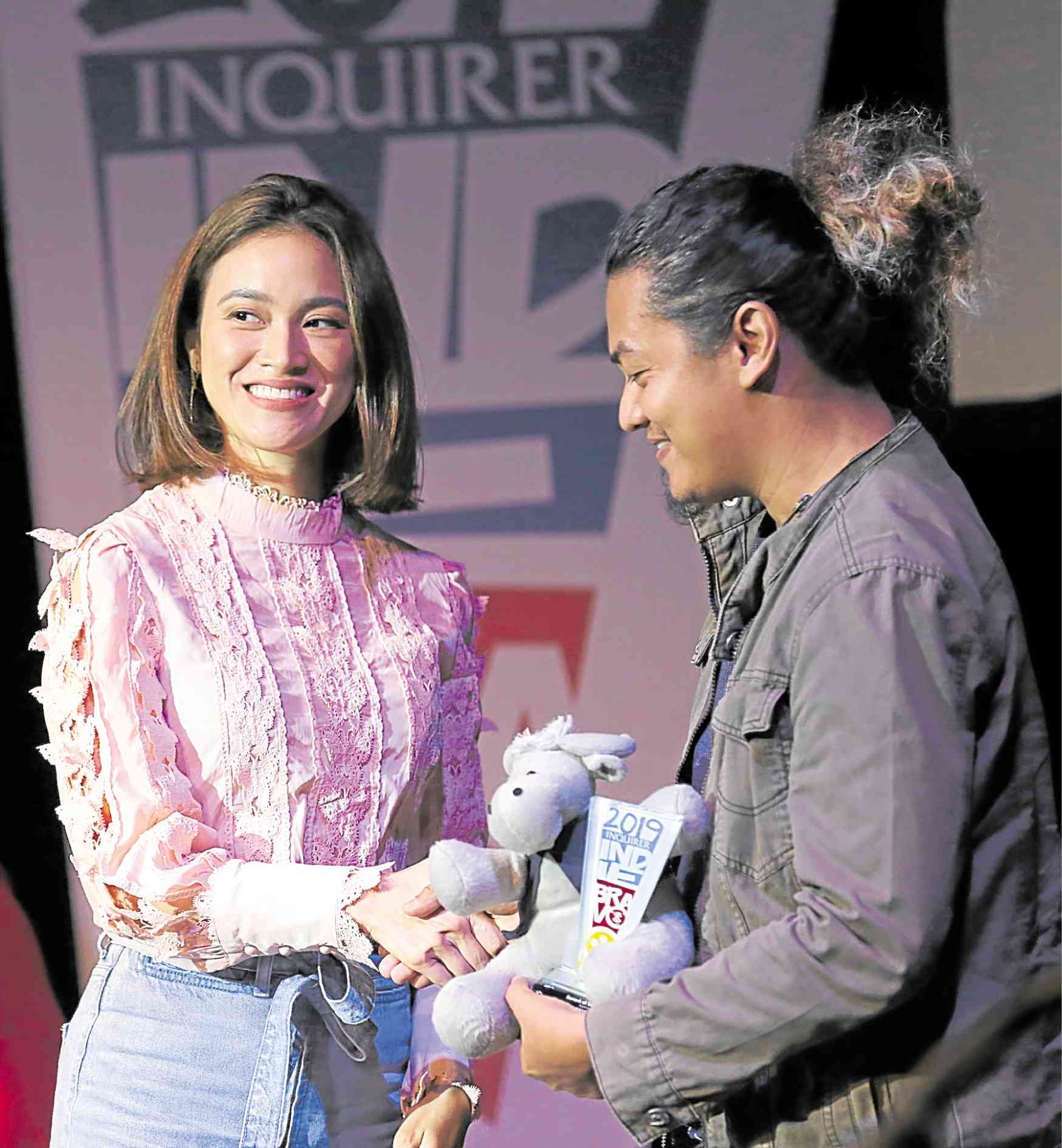 It is only fitting that the special guest of this year’s edition of the Inquirer Indie Bravo! Awards show was Cannes best-actress winner Jaclyn Jose.

Like Jaclyn’s victory at the prestigious Cannes Film Festival (for Brillante Ma Mendoza’s “Ma’Rosa”), the Indie Bravo! Awards is also celebrating a milestone.

But getting Jaclyn to appear on the show was not an easy task. It took us two weeks of communicating with her management company, PPL Entertainment, for it to squeeze in our request into Jaclyn’s very hectic schedule. We didn’t get a confirmation for her attendance until a week before the actual event.

On the day of the show, Jaclyn was so sure she wouldn’t make it because of heavy traffic that she already sent word through her handler that she would no longer appear onstage but would still arrive to say hello. Luckily, she got to the venue some 10 minutes before she was called.

The Indie Bravo! show featured an interview with Jaclyn, who said that the award has opened more opportunities for her locally, not just on the big screen, but also on television. 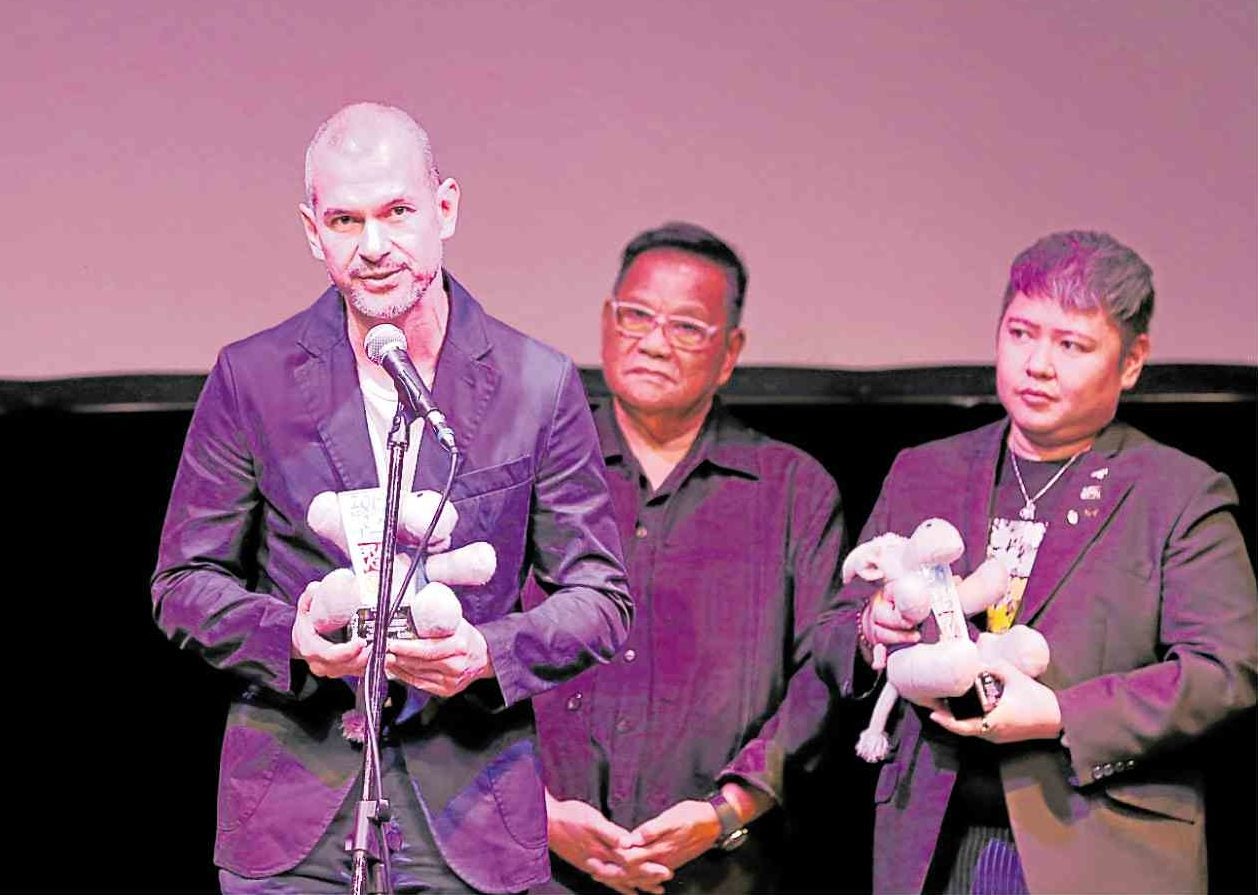 Tony Mabesa’s son David accepts the award for his late father. In the background is “Rainbows’ Sunset” director Joel Lamangan, and “Kristo” directorHoward Yambao, who receives the trophy on behalf of the late Kristofer King.

Filmmaker Howard Yambao attended the ceremony to receive the Indie Bravo! trophy of honoree, the late Kristofer King, for “Kristo.” He had told us before the show what he planned to share with everyone about Kristofer, but the tribute—which also featured the late Eddie Garcia and Tony Mabesa—had been an emotionally charged one that Howard probably changed his mind.

What Howard was supposed to say was that Kristofer was the unanimous pick for best actor at the 2019 Asean International Film Festival and Awards (AIFFA) in Malaysia, and that this was according to filmmaker Tikoy Aguiluz, who was one of the jury members.

Howard told us that during the deliberation for best actor, no one knew that Kristofer had already passed on, and that this was only revealed to the other jury members by Tikoy when they had already come up with a winner. This gave the jury goose bumps, Howard said. 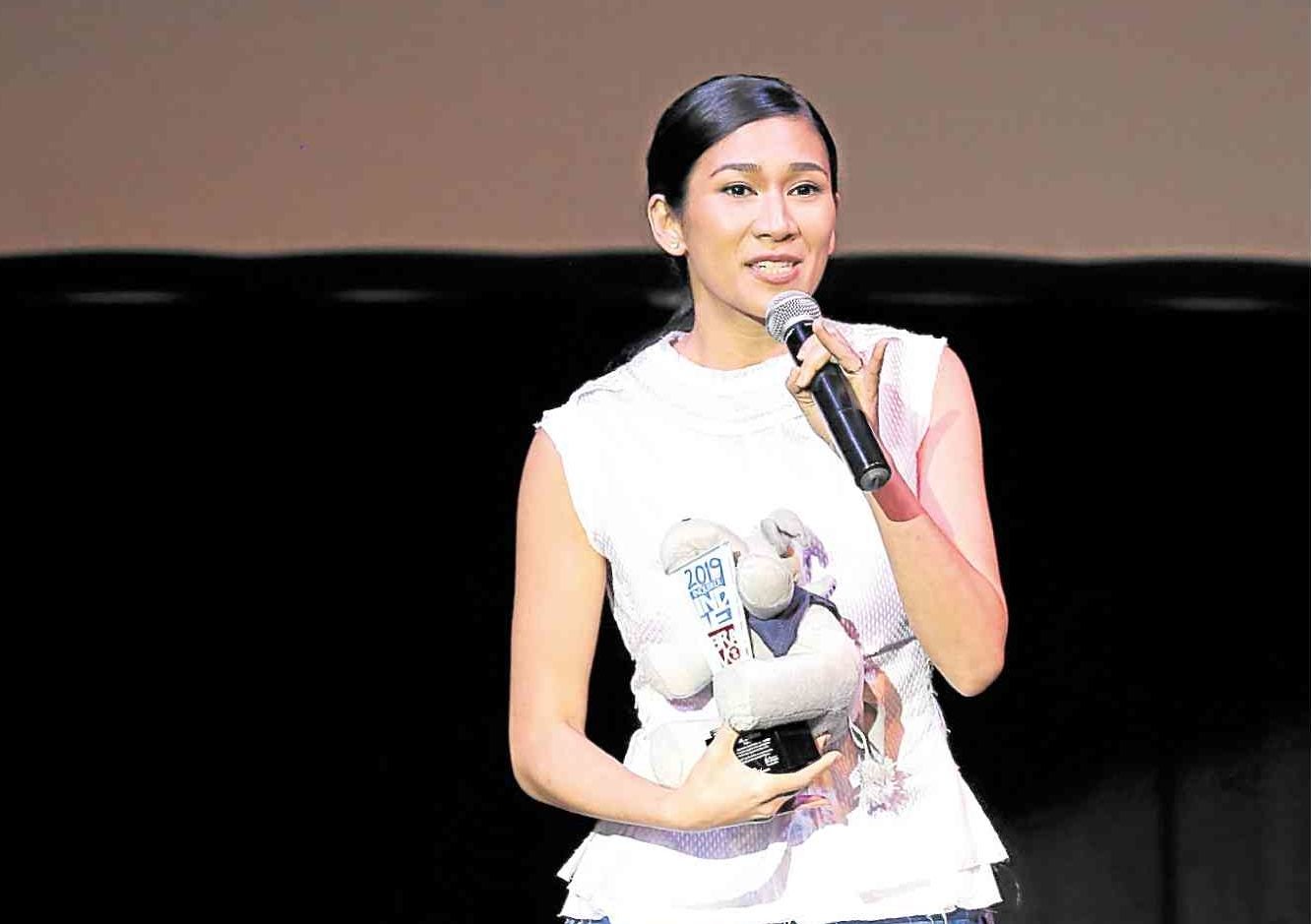 At the end of the three-hour program, everyone hugged and congratulated each other, but for us, the best greeting came two days after the event—from Lilit, who said he hoped to keep attending until the 25th Indie Bravo! show.

The show is produced by the Philippine Daily Inquirer in cooperation with Ayala Land and PowerMac Center Spotlight.