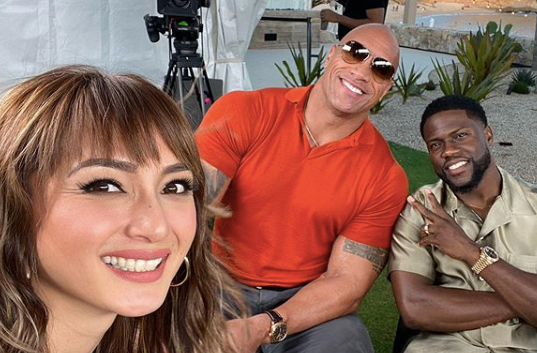 Iya Villania had the chance to meet the cast of “Jumanji: The Next Level,” including Dwyane “The Rock” Johnson, Kevin Hart, Jack Black, Karen Gillan and Awkafina, when she was in Cabo San Lucas, Mexico, recently.

Villania posted selfies she took with the stars via Instagram, sharing that she got to interview them along with director Jake Kasdan.

“Before I head off on another trip (this time with the Mister), just want to backtrack the awesome week that was in Cabo, Mexico with the cast of Jumanji: The Next Level! Man!” said Villania on Nov. 28. “Feel so fortunate to be doing what I’m doing!”

“Jumanji: The Next Level” comes two years after “Jumanji: Welcome to the Jungle” premiered worldwide and sees the gang back in Jumanji for another crazy adventure. Other celebrities known to be joining the second installment are Nick Jonas, Danny DeVito and Danny Glover.

Villania extended her gratitude to the stars and remarked how the cast’s chemistry was so evident upon meeting them. She also playfully joked about wanting to punch Johnson, but wisely did not do so lest she hurt herself.

“PS. Dwayne looked like a punching bag!” she said in jest. “Wanted so badly to throw a punch! But I probably would’ve injured myself.”

“Jumanji: The Next Level” is slated to hit Philippine cinemas on Dec. 4.  /ra

Iya Villania looks after Primo diagnosed with HFMD, advises parents to be mindful