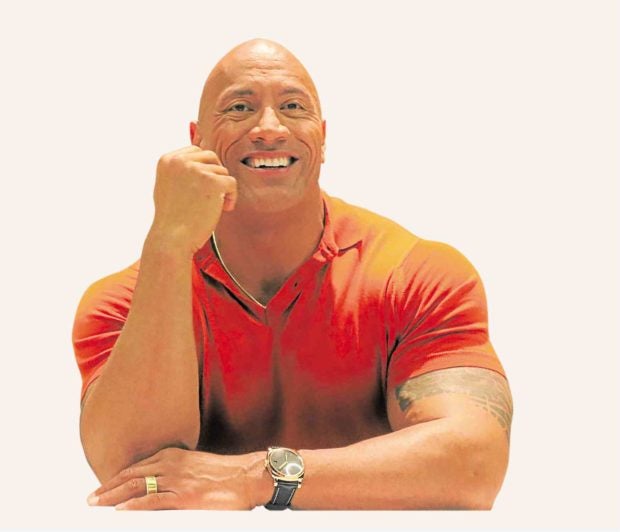 LOS ANGELES—Is it possible? Dwayne Johnson’s biceps were already huge, bigger than my thighs. But now, looking at him in this recent interview in Cabo San Lucas, Mexico, his biceps look like my two thighs combined.

“Thank you,” Dwayne reacted when complimented that he seemed buffer and bigger than ever, as if he weren’t already incredibly ripped before. “It helps that the shirt is smaller,” he joked about his orange polo shirt. In a meeting room in Montage Los Cabos, he looked like The Hulk ripping out of his shirt.

“I am preparing for ‘Black Adam,’” he explained why he looks even more massive. He will star in the origin story of the antihero in the DC comics universe. “We shoot that in June (2020), so it’s about a six-month prep for the role.”

In the meantime, the former wrestling champ known as The Rock stars in director Jake Kasdan’s “Jumanji: The Next Level.”

At 47, Dwayne still revels in the movie’s action scenes, including a spectacular one involving rope bridges and vicious monkeys. “I love them,” he enthused about doing the physically challenging scenes. “As long as they are unique and different and we can bring something different to the table, then I’m all for them.

“I love what I do. I really do. I’ve been in the game for a while now, so I’ve had the opportunity to make a lot of movies. I always try and switch it up in terms of the kind of movies that I’m making.

“But the action sequences in ‘Jumanji’ were always a lot of fun and challenging. Like the bridges scene. It also depends on our director and our director is an ambitious guy, Jake Kasdan. But again, whether it’s ‘Hobbs &amp; Shaw,’ ‘Jumanji’ or ‘Jungle Cruise’ which is coming out, all of these are very different movies that bring action ambition to them.”

“I think that was an entire week,” Dwayne answered when asked how long it took to shoot the bridges scene, which is definitely a highlight. “That particular scene was pretty daunting because the bridges were shaking at the same time. When you read it on the script, it reads like, wow, this is a massive sequence that if we pull it off, I think audiences are going to like.

“But then, once you get there on the day, you realize that when you’re on shaking bridges with multiple people on them, it’s hard to keep your balance. Everyone is trying not to get hurt because you have to jump, land and do things like that. So that was pretty challenging. But ultimately, the scene is pretty cool.” 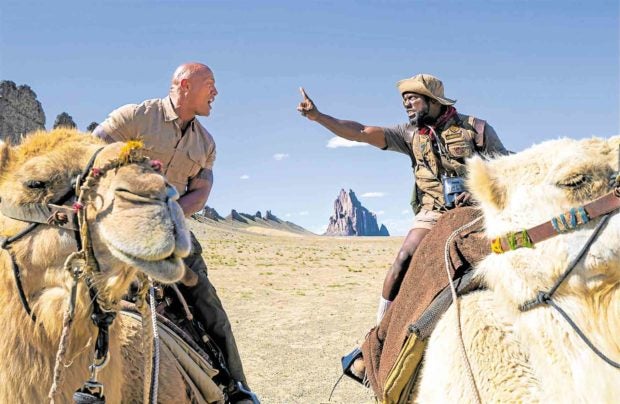 Dwayne Johnson (left) and Kevin Hart in “Jumanji: The Next Level” —SONY PICTURES

Let’s just say, without getting into too many details, that Dwayne’s archaeologist character suddenly finds himself becoming Danny DeVito’s grandpa role. “It was awesome,” he said of channeling the veteran actor. “How I found it was going to a place and being frustrated and oftentimes annoyed at things and having very little patience. It was a real pleasure because it allowed me to get to know Danny.

“I have been a big admirer of him for years. It just gave me the opportunity to know him very well. So, portraying Danny and embodying him was honestly a real joy. What made it a joy was getting to know him. He is just such a wonderful soul.

“It was a challenge because he and Danny Glover are very specific actors with very specific tone, cadence, tempo and energy. So, it was a lot of fun.

“And the greatest thrill was getting the text from Jake Kasdan telling me, ‘Danny DeVito just saw the movie, he loved it and he loved you.’ I was like, ‘Did he have any notes for me (laughs)?’ Jake said. ‘No, but he said it’s f**king great!’”

With his super fit physique, Dwayne was asked if he fantasizes about food bingeing and drinking. Laughing, he replied, “I do fantasize about a lot of things, but food isn’t one of them. And I drink tequila too, as well—sometimes, more than I should.”

Teased if he ever has nightmares of turning into a puny wrestler, Dwayne quipped, “Are you asking me, did I ever have a nightmare where I became Kevin Hart (laughs)? That is an awful nightmare, and I hope I never have that (laughs).”

Told that Kevin, who is his pal, was next on the interview list in this seaside resort, Dwayne, still chuckling, said, “Good, you can tell him I said that.”

Always an amiable and articulate interviewee, Dwayne is the proud father of three, one with his ex-wife Dany Garcia and two with his current wife, Lauren Hashian, whom he married last August.

“I love being a father,” said the man whose dad, Rocky Johnson, was also a former pro wrestler. “I had a challenging relationship with my own dad, but he also had a very challenging upbringing himself. So he loved me with all the capacity that he had, which still made it challenging for us. That was my resource.

“So, growing up and getting a little older, I couldn’t wait to become a dad. Once I became a dad, I realized that there’s a difference between being a dad and being a father. I embrace that and love it.

“I was raised by women, and I’m still surrounded by women and estrogen. The only piece of testosterone in the house other than myself is my dog, so it’s just me and my dog. I have an 18-year-old daughter, a daughter who is going to be 4 in a few weeks and another daughter who is going to be 2 in about five months. So, it’s just various ages and stages.

“And they continue to be my biggest, not only inspiration, but source of love and also my biggest educators. I continue to learn constantly. As far as being a father, I am a good dad, I would like to think.” 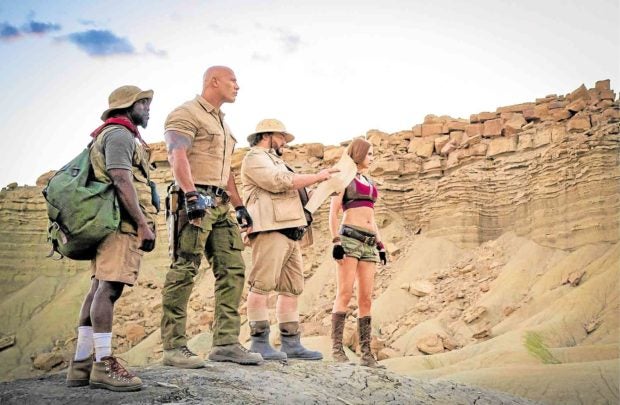 From left: Hart, Johnson, Jack Black and Karen Gillan in “Jumanji: The Next Level” —SONY PICTURES

On playing the title role in his first superhero movie, “Black Adam,” Dwayne gushed, “I can’t wait to play Black Adam. It’s going to be unique. We want to raise the bar in the DC Universe and also introduce the JSA (Justice Society of America) to the world. I am also very excited about Jaume Collet-Serra, who’s our director. He directed ‘Jungle Cruise’ with myself and Emily Blunt. He has a strong vision.

Another dream role of Dwayne is Hawaiian king Kamehameha. And it’s happening. The movie will be called “The King.” “It’s coming along great,” Dwayne reported about his passion project. “Robert Zemeckis will direct. We just continue to write and develop.

“When the project landed at Warner Brothers and we put our team together, Zemeckis said, ‘I’m the one to direct this movie and I know exactly how to direct it.’ Then, we got our writer (Randall Wallace). We knew that it’s something that we weren’t going to rush.

“When I first broke into the business of Hollywood, that became my dream role. In my wildest dreams, I thought, what could I do if I were ever so lucky to do it. Bringing King Kamehameha to the big screen and showcase that lineage, royalty and history to the world, that is a big bucket list. And now, years later, it’s going to come true.”

TAGS: Dwayne Johnson, Jumanji: The Next Level, Only In Hollywood