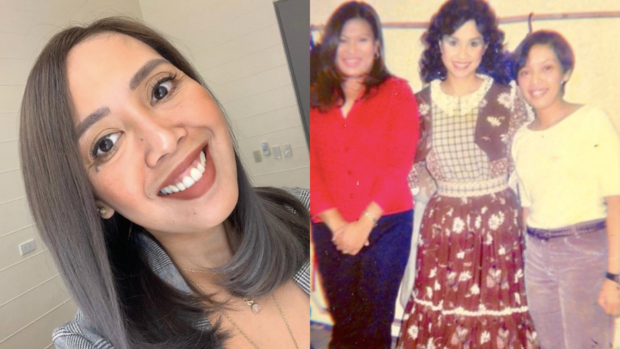 Kakai Bautista and her throwback photo with Lea Salonga in 2000  (Images: Instagram/@ilovekaye)

Kakai Bautista looked back on her earlier days in the entertainment industry as she recounted her time as a wardrobe assistant to Lea Salonga back in 2000.

“It’s been almost 20 years ago since [I] had the [privilege] to serve the one and only LEA SALONGA,” the actress said in her Instagram post last Monday, Nov. 25, which she accompanied with an old photo of her with the singer.

Bautista pointed out that the photo was taken during Salonga’s time in the musical “They’re Playing Our Song” when it ran in the AFP Theater in Camp Aguinaldo, Quezon City, in 2000.

As Salonga’s wardrobe assistant, Bautista recalled that she had to iron, carry and launder her costumes and inner garments for six days a week for almost a year. She was also responsible for dressing Salonga during quick changes while the show was ongoing.

Bautista admitted that “life was very hard back then,” citing that she used to walk from EDSA to the AFP Theater. She also pointed out how she had to skip meals just to make sure she had enough money to return to Laguna, and how she had to find “Cubao Shoe Expo” without Google or Waze.

In light of the hardships she faced, Bautista stated that there were times she wanted to give up. But whenever she heard Salonga sing, she said that her spirit would wake up because she got to see the singer every day.

“I got to sing and dance off stage with her during shows,” she added.

Bautista also expressed how grateful she is today for “those hard but fulfilling happy moments.” She described her time as a wardrobe assistant to the Tony Award-winning singer as one of her best memories that she “will treasure forever.”  /ra