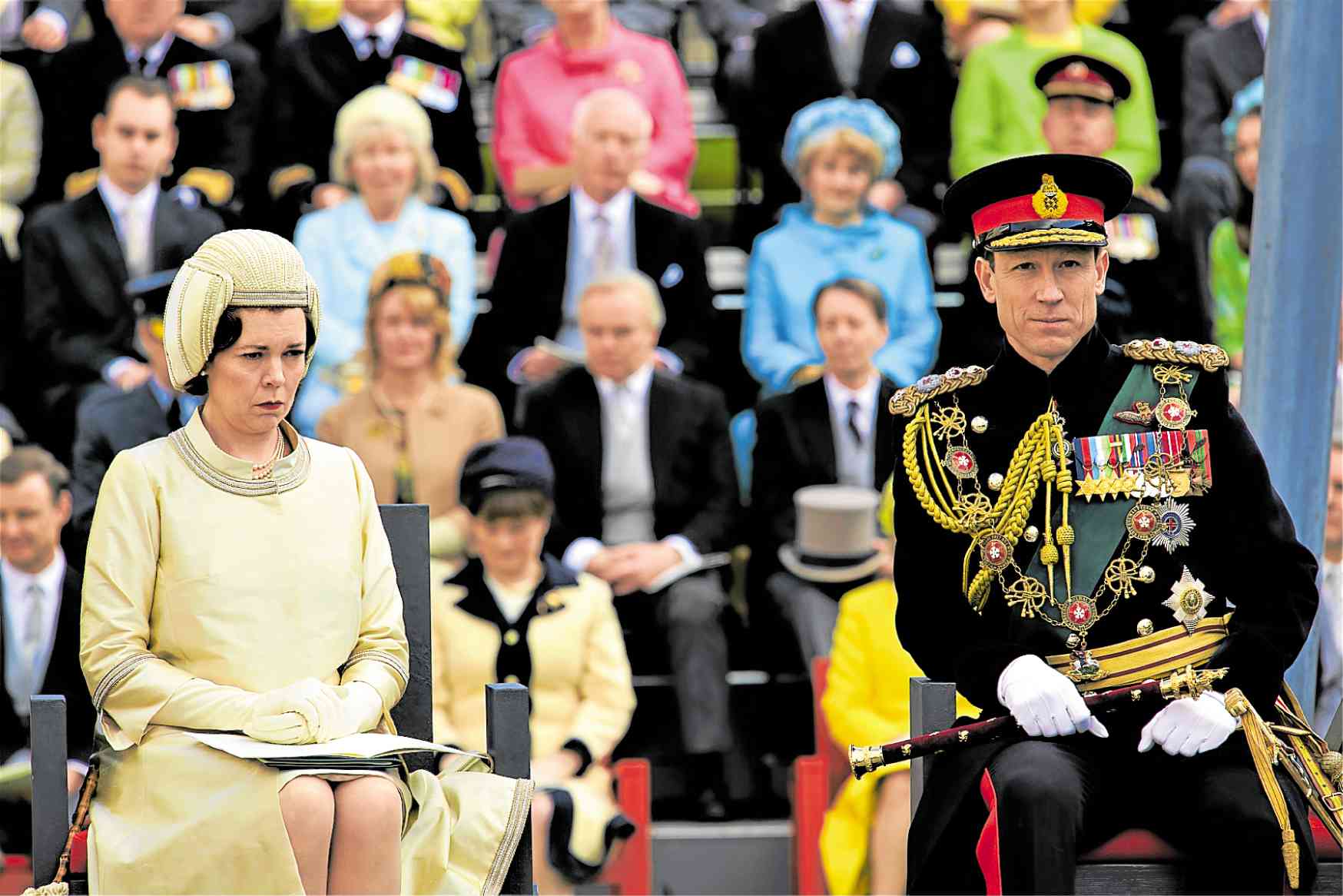 LOS ANGELES—Tobias Menzies has gone from Frank Randall/Jack Randall in “Outlander,” Edmure Tully in “Game of Thrones” to Prince Philip in “The Crown,” and, no surprise, he is once more gaining acclaim as Queen Elizabeth II’s (Olivia Colman) husband.

The Times of London’s Carol Midgley raved about Tobias taking over from Matt Smith as Prince Philip in Season 3 of Netflix’s “The Crown”: “The big surprise of the new series of ‘The Crown’ is that Olivia Colman isn’t the best performer in it.” Midgley went on to hail Tobias: “In voice, mannerisms and plausibility, chuntering about being served venison twice in a week and rolling his eyes at the melodramas of Princess Margaret.”

The 45-year-old former costar of Caitriona Balfe and Sam Heughan in “Outlander” is indeed a good match to the gifted Olivia Colman.

When you were growing up, what did the royal family mean to you? Did you grow up revering them? No, not massively. I came from a pretty Republican home. My mum would actively not watch the Queen’s speech on Christmas day. One of the things about acting is that it gets you to  investigate things that maybe you wouldn’t necessarily [be interested in].

What was your mother’s reaction when she learned that you will be joining “The Crown” as Prince Philip? My mom very kindly didn’t bring up politics. She was pretty benign about it. She hugely enjoyed Seasons 1 and 2. So, for that reason alone, she was excited for that, as a piece of drama.

The show stands up whether you are, on the face of it, interested in that family or not. And I, as many do, credit Peter Morgan (creator) on that. Essentially, the show isn’t really about being royal. It’s more about leadership and what those institutions give to the country, the structures that they offer.

Now that you have been playing Prince Philip, are you more interested in the royal family? Honestly, no. Of course, I’m much more aware just through having gotten much closer to them and thought about them a lot more than I had before. But I don’t think it has changed my politics much.

But I have found a great regard for them. Whatever your political stripe is, you can’t but admire the dedication and service that they have given to our country. 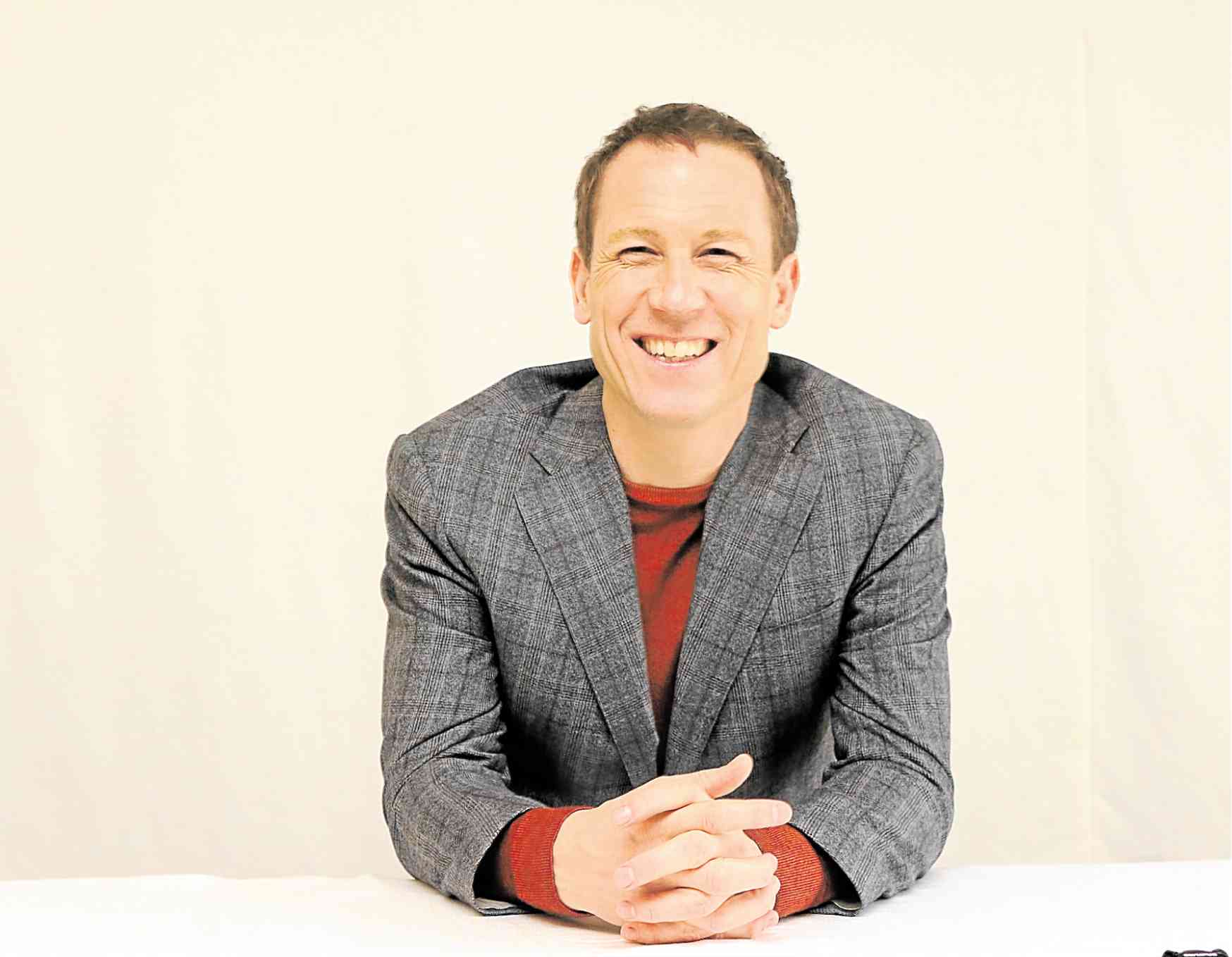 You give a spot-on performance as Prince Philip. Talk about how Peter Morgan’s brilliant writing helps in your portrayal. Absolutely, I agree—the writing is really fine on this show. What Peter weaves together in the show is a sophisticated, complex mixture of ideas and story, and takes us inside the lives of people that are quite private.

So, in that way, it’s a very interesting challenge to  take the audience behind closed doors and imagine what it is like for them inside this huge machine that is the British crown.

One of the challenges of the whole project is that they are very visible. Everyone knows how they move or  sound. So yeah, there’s obviously a technical challenge trying to get close to that and he’s an interesting person.

Did you watch both actual footage of Prince Philip and Matt Smith, as the younger Prince Philip, in the show? Yeah, absolutely. I had both to draw on. I would say it’s probably like 70-30 in favor of the original man. But I really liked what Matt did and that was an amazing resource to have.

Prince Philip has been on quite a journey this season and had a bit of midlife crisis. He seems to have changed quite a bit. What have you learned from playing him? In Season 3, we’re entering a different phase of their lives. They’re entering their middle age and have different priorities. It is  much calmer, but challenges for both the Queen and Philip seem to come from outside.

In Episode 7 of Season 3, we see Philip go through something close to a midlife crisis. I can definitely relate to that. It’s hard as you get old to think about the road not traveled.

Can you talk about the changes? Change is inevitable as you get older. There are different challenges in this season. You see the kids start to come into the story. All those things can’t help but change you.

You mentioned the road not traveled. For you, what are the roads not traveled? Can you relate to the “Moondust” episode in which Prince Philip watches astronauts launch into space in 1969 and feels weighed down by his life in Buckingham Palace? It’s very existential. What’s interesting about the episode is that fundamental thing that we can all relate to so many things because when you’re young, you imagine that you’re going to do so many things, that the world feels so open at that stage.

Then, as you get older, it becomes more defined … it’s hard not to wonder about the decisions you’ve made and how they’ve shaped your life.

Prince Philip and his relationship with his mother is interesting. Can you talk about it? It clearly was a complicated relationship in that he spent a lot of his childhood without her present. There’s a whole period of about five years from when he was about 11 to 16, or 17 when he had no contact with her while she was in a period of suffering from mental illness. 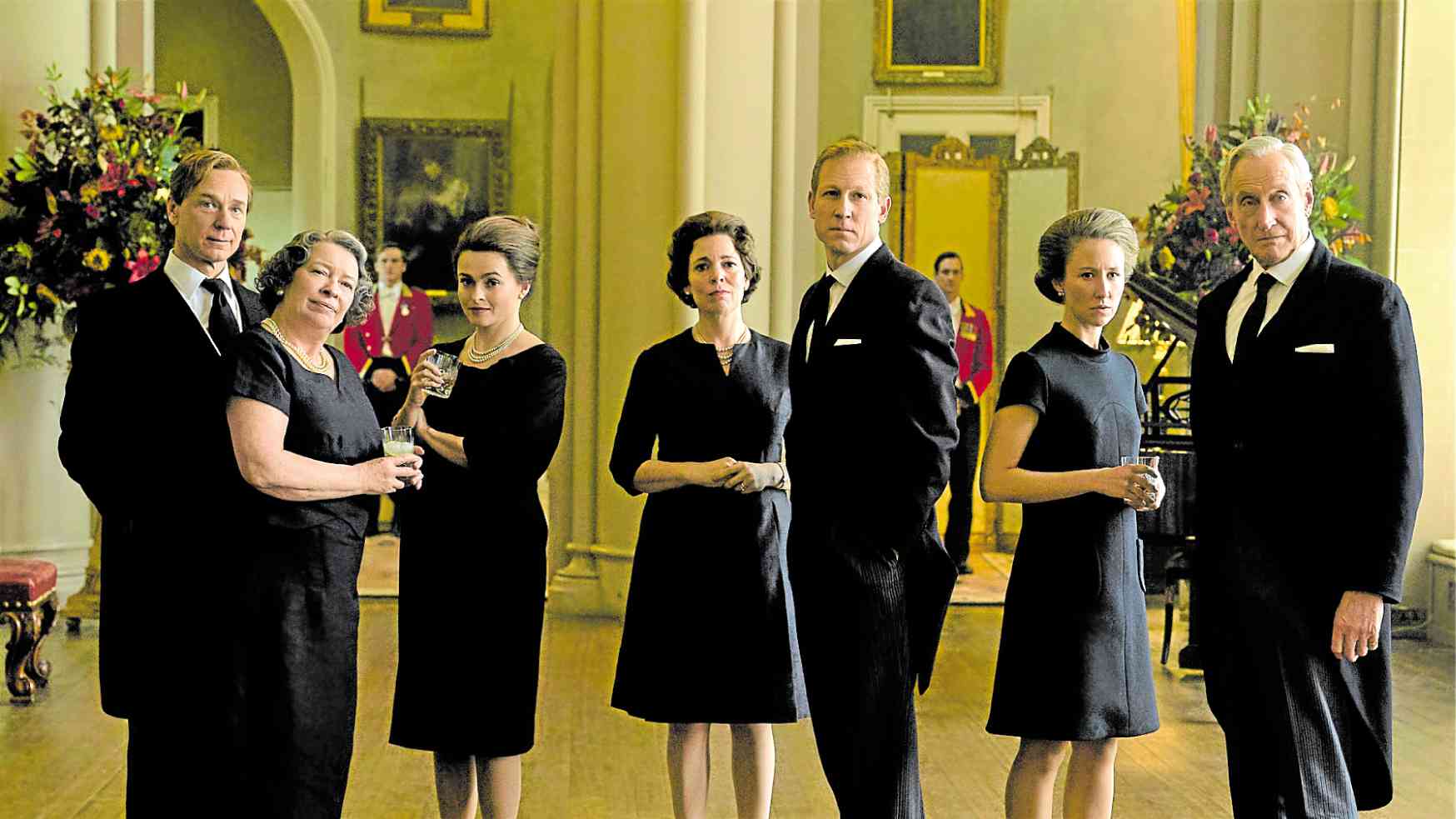 Menzies (fifth from left) joins a big cast of talented British actors in the Netflix series.—PHOTO COURTESY OF NETFLIX

Prince Philip didn’t seem to be a very popular figure. I don’t know whether it’s true that he’s not well-liked. He’s gone through different phases. When you go back to the ’50s and ’60s, he was a bit of a star.

I know in his later life, in the ’90s certainly when he was up against the more aggressive Murdoch press later on, his relationship was getting much more complicated with the media and he would get apparently more gaffe-prone.

Do you think Prince Philip is narcissistic? One is wary to make sweeping statements about the real person because it’s pretty hard to tell. Certainly, the story that we tell about it is a fundamental aspect of him—this contradiction between his alpha maleness and the fact that he has spent his whole life a few steps behind his wife.

What was Prince Philip’s impact on the palace? In Episode 4, you see him open the family up to television and try to make them more approachable.

In that regard, he is an outsider who has come in and tried to have some influence on what can be quite an old-fashioned institution.

Would you trade places with Prince Philip? I don’t think I would. No.  Because I wouldn’t like to be that visible. I wouldn’t like to have people following me around all day and constantly having my life metered out like that. I like my privacy…