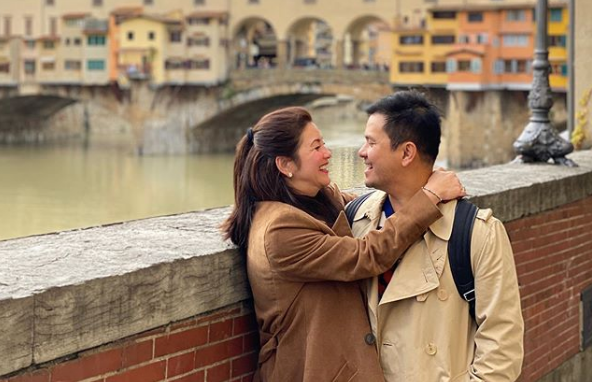 Asia’s Songbird Regine Velasquez and Ogie Alcasid seemed to be lost in their own little world during their trip to Italy. The lovebirds were with other Kapamilya stars including Gary Valenciano, Zsa Zsa Padilla, Dimples Romana, Jodi Sta. Maria, Kathryn Bernardo and Daniel Padilla who flew to Italy for their “ASAP Natin ’To Rome” show on Nov. 16.

Alcasid shared to his fans that their dream honeymoon after they got married in 2010 was Positano, a village on Italy’s Amalfi Coast. However, they never got to go since Velasquez got pregnant with their son Nate two months after.

“And so, we both said ‘maybe someday,’” said Alcasid via Instagram on Nov. 19.  “Well, the Lord has blessed us after 9 years of waiting because finally we made it here. It certainly was worth the wait.”

Velasquez and Alcasid wasted no time in reveling in the beautiful sights and scrumptious eats of Italy, making sure they did not miss out on the pastas and gelato.

The couple also did their fair share of shopping and took to the luxury outlets at the Mall Firenze in Tuscany.

They then went sightseeing and took to the Basilica of Santa Maria Novella in Florence before wandering off to Ponte Vecchio, complete with a “tabing ilog” moment.

They also posed with a replica statue of David, which overlooks the Piazza della Signoria square.

Velasquez and Alcasid also had the chance to meet with Giorgio Pinchiorri, the owner of 3 Michelin star-awarded restaurant Enoteca Pinchiorri, plus see its wine collection, which is one of the most extensive in the world.

Velasquez did many things differently or that she would not ordinarily do,  during their trip, as per her Instagram post today, Nov. 22. Nevertheless, she said she and Alcasid still had a memorable time in their adventures in Italy.

“I walked ( I hate walking) I ate (a lot) I drank wine ( I don’t really drink). I shopped but didn’t really buy anything for my self. My phone was almost fully charged at the end of the day coz I was talking (a lot) and I was laughing the whole time,” said Velasquez. “To make a long story short I had a great time.”  /ra