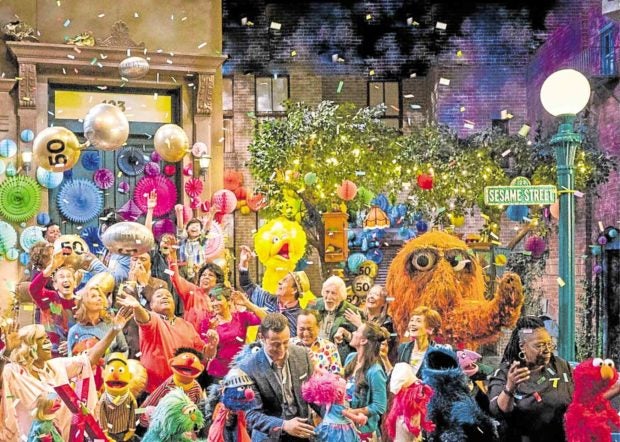 NEW YORK—You can never be too old for “Sesame Street.” The beloved children’s series premiered 50 years ago this month and is still a favorite among kids and adults.

Some celebrities share their thoughts on seeing the show— and some of being in the show.

Chrissy Teigen: “Sesame Street” is the purest form of entertainment that has ever come through the television screens. I grew up watching it. Seeing them grow along with the changing times, along with the impact that they’ve made on children who were going through different struggles, whether it was their parents divorcing or autism—they’ve adapted to so many different situations, but they’ve always had the purest heart with it.

“Sesame Street” actually makes me emotional with how caring, loving, pure and kind they’ve been throughout the years. Nothing lights up a kid’s face like seeing Elmo.

Carol Burnett: I forgot that there were people there. They were so real. I really felt like I was dealing with these critters and creatures that were created so beautifully. The puppeteers were absolutely brilliant because you forgot that they were there. They just knew how to do it.

Former “Sesame Street” cast member Kim Raver: I learned how to count on “Sesame Street.” I learned the alphabet. While people were watching it on television, I was part of it, so that to me was really the beginning of this very creative world.

Neil Patrick Harris: Jim Henson has been one of my idols ever since I was a little kid. I still have a workshop down in my basement right now where I make puppets out of foam, ping-pong balls for eyes and things. There’s something so special about making inanimate objects animate and when they can teach kids globally about not only letters and numbers and vowels, but about sharing and responsibility, that’s something that will endure for 50 more years.

Emilio Estevez: “Sesame Street” has always pushed the envelope and pushed us to look at ourselves in a different way and each other in a compassionate way. And they did it with humor in a way that made it very palatable. So I think that’s the genius of the show and why it’s touched so many for so long.

Olivia Holt: It’s not just entertainment, you know? There are some lessons to learn behind it and I think, as humans, we’re drawn to that. We’re drawn to sort of seeing people in this problematic light, then watching them cope with it. You’re really learning something, and that’s what makes great television.

Meghan Trainor: I watched it as a kid. Everyone watched it. It’s amazing. My mom was like, ‘Oh that’s the anniversary of when I watched it,’ and I’m like, ‘Oh, my gosh,’ because it came out when she was born. So, yeah. It’s not even just an iconic thing, it’s a lifestyle.—AP