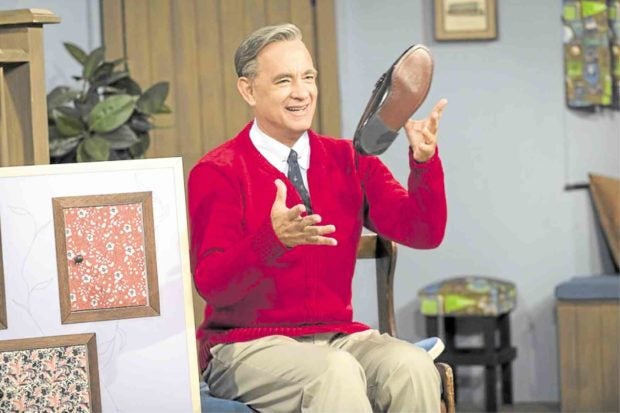 Director Marielle Heller frames “A Beautiful Day in the Neighborhood” as if it were an episode of “Mister Rogers’ Neighborhood,” with miniature sets of cars and bridges to illustrate New York and Pittsburgh.

Mr. Rogers, played with clear-eyed purpose by Tom Hanks, introduces the audience to the film’s protagonist, journalist Lloyd Vogel (Matthew Rhys), using his “picture window” in that all-too-familiar living room where he’s just changed into his sneakers and sweater. It’s even rated PG.

But “A Beautiful Day” is not a children’s tale at all. It’s a story about a man who suffers from the doubly impossible combination of being an adult and an investigative journalist. In other words, he’s the person least likely to be charmed by the straightforward sincerity of someone like Fred Rogers.

The film is loosely based on Tom Junod’s article “Can You Say… ‘Hero’?” which appeared in Esquire Magazine in November 1998. Junod has said that spending time with the then 70-year-old changed him. Cynical at first, the two formed a friendship—Junod’s first ever with a subject—that would last until Rogers’ death in 2003.

The similarities stop there and the film veers off in its own direction, adding drama and elements that are not part of Junod’s life at all—like getting into a fistfight with his father at his sister’s wedding, neither of which happened.

But as Junod writes in The Atlantic this month, the film “seems like a culmination of the gifts that Fred Rogers gave me and all of us, gifts that fit the definition of grace because they feel, at least in my case, undeserved.”

Essentially, Fred Rogers’ lessons can apply to adults, too. And “A Beautiful Day in the Neighborhood” spins its magic to show us how, no matter if it’s mostly a fiction from the minds of screenwriters Micah Fitzerman-Blue and Noah Harpster.

The film introduces Lloyd at a particularly unstable moment. He’s got a newborn son with his wife, Andrea (an understated Susan Kelechi Watson), and his long-estranged father (Chris Cooper) has suddenly started trying to come back into his life.

It’s under these high-pressure circumstances that his editor (Christine Lahti) assigns him to write a “small piece” about Fred Rogers for the magazine’s “heroes issue.” Lloyd scoffs at what he considers a demeaning assignment.

He’s there to be an investigative journalist and the host of a cheesy children’s show is below him. Andrea even asks her husband, knowing what kind of writer he is, to please not ruin her childhood.

He remains skeptical even upon meeting Fred and goes back to his editor to ask for more time, saying that he “just doesn’t think he’s for real.” Sure, part of you is probably thinking Lloyd is a monster. But consider Lloyd’s point of view, too: Fred uses puppets during his interview and deflects quite a bit on the more pressing questions, often diverting and asking about his interviewer instead of answering.

And yet, his goodness starts to transcend all of that. Heller does a marvelous job illustrating the effect Fred has on those around him. Even the production staff whom he infuriates with his tendency to veer off schedule by spending a little too long with visitors, falls in line when he starts to work his singular magic in front of the camera. They know they’re making something special.

One scene, which seems almost too schmaltzy to be true, in which a subway car full of adults and children starts serenading Fred with his theme song, actually happened.

Hanks is such an obvious choice to play someone as beloved as Fred Rogers that his performance is something that could be in danger of being taken for granted or overlooked. He just makes it all look so easy—the almost uncomfortably slow way that he speaks.

But it’s a testament to Hanks that you can’t “see” the work. But much like Fred Rogers, you don’t have to understand it to be moved.—AP