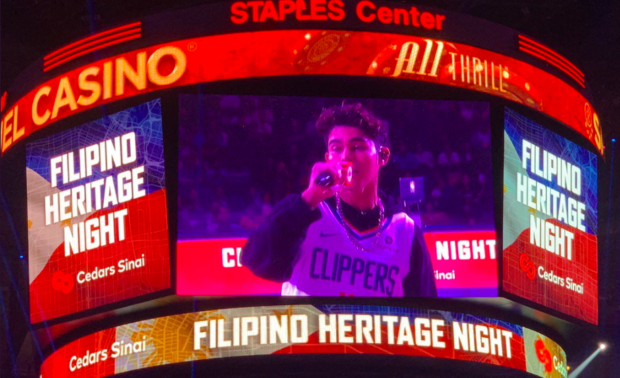 Iñigo Pascual performed at the halftime show during a game between NBA teams the Los Angeles Clippers and the Oklahoma City Thunder on Monday, Nov. 18.

The game, hosted by the Clippers, was in celebration of Filipino Heritage Night and was held at the Staples Center in Los Angeles, California.

Inigo Pascual performs at the Staples Center during the Filipino Heritage Night halftime show of the La Clippers VS Oklahoma City Thunders! #TatakStarMagic

He also performed his new track “Catching Feelings”, according to his record label Tarsier Records.

He even gave the audience a preview of its new music video set to be officially released tonight, Nov. 20. “STAPLES CENTER SAW IT FIRST,” the label said on Twitter yesterday.

STAPLES CENTER SAW IT FIRST: @InigoDPascual's Catching Feelings MV just had its world premiere at the OKC vs LAC match amidst Inigo's halftime performance. He performed the track and his hit, "Dahil Sa'yo" at the sold out game. pic.twitter.com/UE0GwgibuJ

The actor said that he was doing the show last week, Nov. 13. It appears that he could not believe the once in a lifetime opportunity himself.

“If only I could talk to my younger self and tell him that it would one day happen…” Pascual said.

If only I could talk to my younger self and tell him that it would one day happen… I used to pass by Staples Center coming from the airport and I would always say “1 day, i’ll be performing in there”🙏🏼

He added, “I used to pass by Staples Center coming from the airport and I would always say ‘[one] day, [I’ll] be performing in there.” NVG