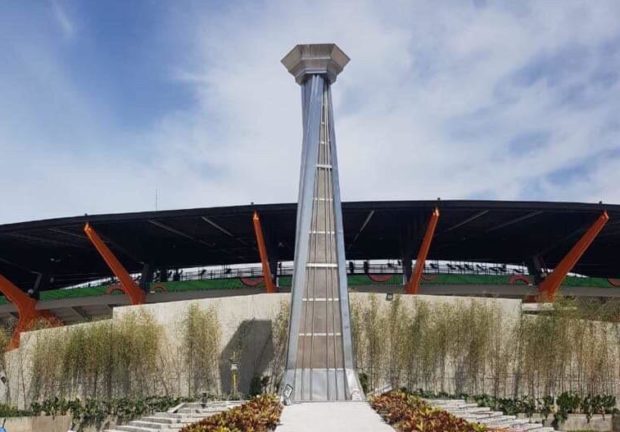 The controversial SEA Games cauldron estimated to cost around P55 million. Image: courtesy of the BCDA

Actress Agot Isidro, a staunch critic of the administration, said this was a “million and more reasons for everyone to not pay our taxes,” as posted on her Twitter yesterday, Nov. 18.

(This bullshit is where our taxes are spent. Are you still game, Philippines?”

Senate Minority Leader Franklin Drilon yesterday pointed out the “extravagant” cost for the design and construction of the 50-meter tall cauldron, during the deliberations on the budget of the Philippine Sports Commission.

Singer Leah Navarro had some strong words against the government, which she said has “never been known for its honesty or propriety,” as posted on her Twitter yesterday.

“Good grief. P50M for an unimpressive, ugly, one-time use butane lighter?!” she asked. “Damn, the shameless overpricing by this gov’t. Well, it’s never been known for it’s honesty or propriety.”

SEA Games 2005 karate gold medalist Gretchen Malalad said that the budget for the cauldron should have rather been used to feed and train the country’s athletes instead, through a Twitter post she made yesterday.

(That cauldron’s budget ought to have been used for “cauldrons” for food! You should have allocated the money for the athletes’ food budget. Or for their training.)

In a separate tweet, Malalad added that athletes are often deprived of proper financial assistance from the government, but is able to pay for the extremely expensive cauldron.

Former APO Hiking Society member Jim Paredes meanwhile gave a simple “what??” through Twitter yesterday, referring to a tweet by one @DanSantos8 which stated the amount spent for the cauldron.

The P55-million stadium cauldron was designed by the late architect and national artist Francisco “Bobby” Mañosa. The country is hosting the SEA games from Nov. 30 to Dec. 11 in New Clark City, Pampanga and other venues. JB