Why Joem Bascon still not completely happy despite having 4 new films, 1 soap 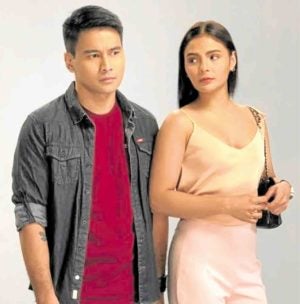 “I just take one day at a time,” said Joem Bascon when asked to share his current state of mind.

While he is busy promoting four films, the actor admitted that he is also trying to fix “a major problem” between him and his longtime girlfriend, Crisha Uy.

“Our relationship is going through a rough patch. It’s something major. In time, I will be able to tell you if we’re able to fix it or not,” Joem told the Inquirer during a media gathering on Monday for his movie “Culion,” an entry in the 2019 Metro Manila Film Festival (MMFF) in December.

Joem can also be seen in “The Annulment,” opposite Lovi Poe; in “Utopia,” a finalist in the ongoing 2019 Cinema One Originals; and, soon, in “Write About Love,” also a 2019 MMFF entry.

“I don’t want to stress myself. I’m just happy that I have work, especially since Christmas is approaching. This is more of a good kind of stress. I’m glad I’m able to divide my time for each film. I don’t want to be unfair to any of my producers,” he pointed out.

When prodded, Joem let on that the issue with his girlfriend isn’t about his work or his lack of time for the relationship.

“It’s more because of a complicated situation. Time was never a problem. I would always take her out when I don’t have work. We also went out of town a lot. We enjoyed doing things together, explored places together,” Joem said.

“While we would post stuff about our relationship on social media, we chose to keep our quality time together private, or away from show biz,” the actor shared with the Inquirer.

Aside from his big-screen projects, Joem is also seen regularly in the ABS-CBN soap series “Starla,” where he plays the character Dexter.

The actor further said: “I’m just happy with the positive feedback. The character started off being very stiff and formal.

“As the story progresses, and as he becomes more exposed to stressful situations, Dexter shows his true colors. He becomes rude and troublesome. He shows how ill-bred he is. I guess even though you grew up rich and studied in the best schools, none of this matters if you’re put in a tight spot.”