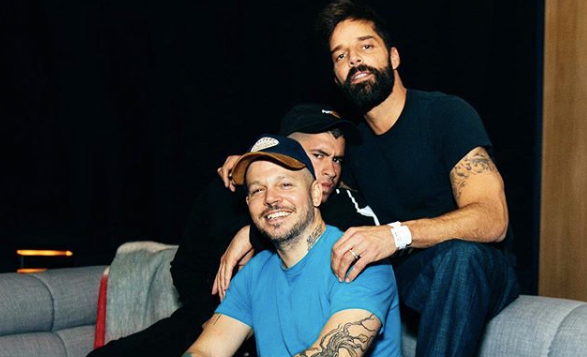 The Puerto Rican artists have joined forces ahead of the 20th Annual Latin Grammy Awards, which Ricky Martin will co-host with actors Roselyn Sánchez and Paz Vega.

The trio will also perform “Cántalo” live for the first time during the award ceremony, which will take place on Nov. 14 at Las Vegas’s MGM Grand Garden Arena.

The genre-bending collaboration was composed by a wide array of Latinx artists, including Danay Suárez, Rubén Blades, Jeffrey “Trooko” Peñalva and Johnny Pacheco.

As Rolling Stone pointed out, “Cántalo” pays homage to Puerto Rican salsero Héctor Lavoe, and most particularly to his 1974 performance of the song “Mi Gente”.

“The collaboration in this song continues to show the union through music and within a circle of different generations that represent our culture and heritage. It was an incredible experience to integrate ‘Mi Gente’, a song with a rich history from its creation in Africa to its global impact,” Residente said in a statement.

This is the first time that the three hitmakers team up, although Bad Bunny and Residente have previously worked together on “Bellacoso” and on the protest song “Afilando los Cuchillos”.

This past July, Martin, Bad Bunny and Residente joined protestors in Puerto Rico to call for the resignation of the then-governor Ricardo Rosselló, who was at the time embroiled in a corruption and private chat scandal.

“For years, decades, the system has taught us to stay quiet. They’ve made us believe that those who take to the streets to speak up are crazy, criminals, troublemakers. Let’s show them that today’s generations demand respect … The country doesn’t belong to them, it belongs to all of us,” Bad Bunny then said in an Instagram video.

In addition to “Cántalo”, Martin has recently revealed his plans to release a new album next year. The vocalist will also kick off his Movimiento tour in his native Puerto Rico next February. IB/JB