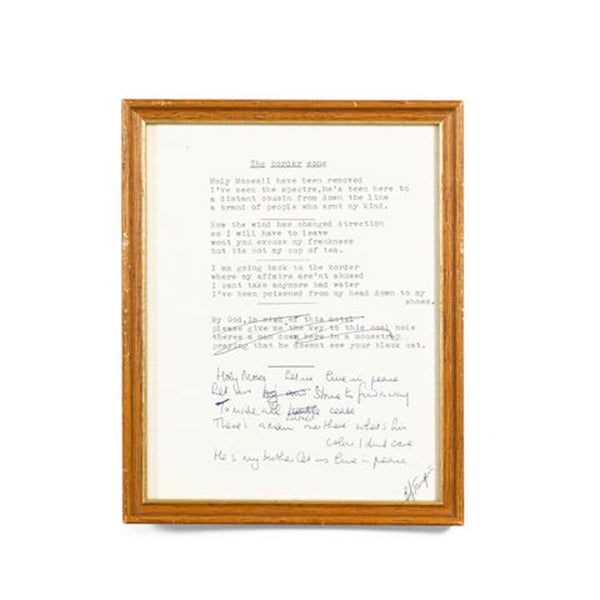 Bernie Taupin’s original lyrics to the early Elton John hit, “The Border Song”, with annotations by the English vocalist. Image: courtesy of Bonhams via AFP Relaxnews

Among them are classics that the English vocalist penned with his longtime collaborator Bernie Taupin, such as “Candle in The Wind”, “The Border Song”, “Goodbye Yellow Brick Road”, “Bennie and the Jets” and “Saturday Night’s Alright For Fighting”.

The renowned lyricist notably auctioned a large part of his lyric manuscripts in November 2018, including original drafts of “I’ve Seen That Movie Too” and “Candle in The Wind 1997”.

Lyric manuscripts for additional Elton John songs are now being offered by Bonhams on behalf of Taupin’s first wife, Maxine.

“I thought after 40 years of having these fabulous treasures and enjoying them that it was time to have somebody else enjoy them. And with the fever-pitch interest in Elton, it’s really the year of Elton John with the movie ‘Rocketman’ and with his autobiography ‘Me’. I figured this was a good time,” Maxine Taupin told Rolling Stone.

Although one of the most affordable lots, “The Border Song” is a rare example of John and Taupin directly collaborating on lyrics.

The award-winning vocalist has said for years that he only composed the music, while Taupin penned the lyrics of the ballad.

However, the original manuscript includes several crossed-out lines that do not appear in the finished version of “The Border Song”, which read “My God, I’m sick of this motel/please give me the key to this coal hole/there’s a man down here in a mousetrap/praying that he doesn’t see your black cat.”

They were replaced by a stanza written in John’s handwriting, including the famous verse “Holy Moses, let us live in peace.”

It is still unclear whether the vocalist wrote these lines himself or if they came from Taupin.

The original manuscripts will be offered on Dec. 9 by Bonhams, as part of its “Music Memorabilia” auction in Los Angeles.

Over the years, items of music memorabilia have increasingly attracted the attention of collectors, also becoming a major investor’s market.

Recently, the olive-green cardigan that Kurt Cobain wore during his 1993 “MTV Unplugged” performance went under the hammer for a record-breaking $334,000 (P16.9 million) in New York City. RGA/JB