Betong revisits his singing roots in ‘milestone’ show, with Alden in tow 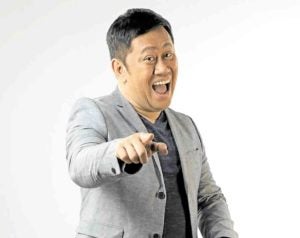 Primarily known for his comedy work and for winning the fourth season of the reality show “Survivor Philippines,” Betong Sumaya usually gets quizzical stares when he tells people that he sings.

“They get really surprised. ‘Really, you? Singer?’ they would tell me. Not a lot of people know that I used to join amateur singing contests when I was young and worked at comedy bars, where I honed my singing skills,” he told the Inquirer at a recent pocket interview for his upcoming first solo show, “Betong’s Amazing Concert: Try Ko Lang Ha?”

While his mother wasn’t a professional singer, she was good at it, Betong said. And thus, he was exposed to music at an early age. “I was about 4 years old when I started singing. I entered different barangay contests. One time, I even trooped to Lucena, Quezon to compete,” he related. “I bagged third prize!”

The 43-year-old actor-television host didn’t expect his career to turn out the way it did. He enjoys his work as a comedian, but he makes sure not to completely neglect his singing. “That’s why I get excited whenever I’m asked to be part of variety shows,” related the “Bubble Gang” mainstay.

Mounted by GMA Artist Center and Michael Angelo Productions, Betong’s concert is set on Nov. 21 at the Music Museum, and will have him performing ballads, upbeat numbers, as well as comedy acts.

“This is a huge milestone in my career. Not everyone gets a chance to do something like this. This is also my way of thanking those who have supported me along the way,” said Betong, who’s raring to record a humorous ballad a la Michael V’s “Sinaktan Mo ang Puso Ko.”

“I think I will bring him out toward the end of the show,” he said of his “The Gift” costar. “Baka mag-alisan silang lahat agad!”