The Megastar as a mom | Inquirer Entertainment
Close
menu
search

The Megastar as a mom 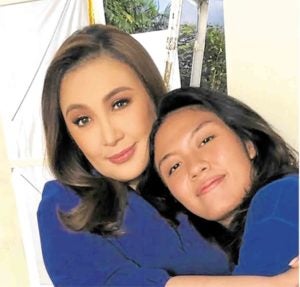 Frankie Pangilinan has been winning over new fans with her eloquence and outspokenness, whether in her television interviews or social media posts. And her mother, Sharon Cuneta, couldn’t be prouder of her “matandang maliit.”

“That was what her lola used to call Frankie when she was a child. She was a very quiet baby. Give her a bottle and she would be quiet, just playing with her feet. She rarely cried and always smiled,” Sharon told the Inquirer in an interview. “And while she was growing up, I was like, ‘Mature ‘to!’”

“She was already mature at a young age. It was like she skipped the toddler stage,” the Megastar added, chuckling. “Manang!”

Frankie doesn’t shy away from voicing out her opinions, may it be about the music industry, politics or body image—something Sharon herself encourages.

“She’s a deep thinker, very insightful and obviously smart. She expresses herself, her beliefs, her convictions. And I’m so proud of her when she does that. Even if her opinion differs from someone else’s in the family, we respect that. We teach them to respect other people’s opinions,” she related.

Frankie currently attends college in New York. And while it has only been about two months since her big move, Sharon is already missing her eldest daughter with Sen. Kiko Pangilinan dearly.

“I recently got inside her room and all I did was cry. I understand why Frankie’s there—I mean, I let her go and even sent her off in the first place. We talk via FaceTime. But I just miss her. I miss her hug. I miss the scent of her hair,” Sharon admitted, adding she and Frankie share a tight bond.

“She’s very close to me. Even when she’s busy, she sees to it to come into my room and really spends time with me, even just for a few minutes. We chat. She gives me a kiss and hug, and reminds me how much she loves me,” she said.

While she can’t help but get worried about her daughter living so far away from home, Sharon said she just has to trust her. “I always remind her to take care of herself, to look after her allowance and do well in her studies. I remind her to pray, always.”

As for her firstborn, KC Concepcion, Sharon said she tries to keep her hands off her daughter’s personal life—especially where her romantic relationships are concerned—as much as possible. “I can’t talk about her love life. She’s already of age. A full-grown adult. I don’t want to meddle, unless she comes up to me,” she told a group of reporters.

“Let’s give her a break and let her go through what she has to go through,” the 53-year artist added.

There has been persistent rumors that KC and her French boyfriend, Pierre Plassart, have already broken up. And while Sharon neither confirmed nor denied such speculations, Sharon believes that they’re both “good people” who had “genuine intentions” for each other.

She also urged onlookers not to be too quick to judge or speculate about what happened.

“I’m not just talking about KC, but in general: When a relationship doesn’t work out between two people, it doesn’t necessarily mean that one of them is bad or at fault. Sometimes, despite the amount of love and respect, there are some things that simply don’t work out,” Sharon pointed out.