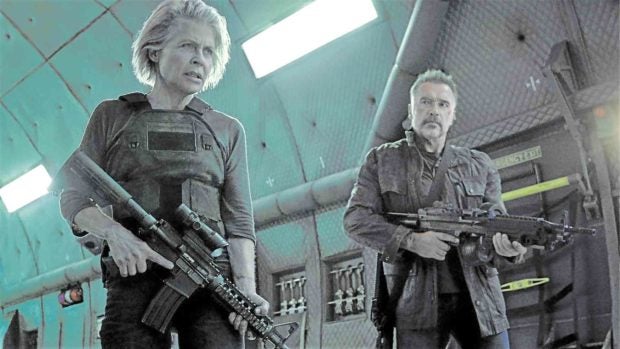 LOS ANGELES—Mishaps almost cost Linda Hamilton the role of a lifetime—Sarah Connor. Linda revealed the name of the actress who would have been playing sci-fi cinema’s most badass female action hero in our recent interview.

And accidents continue to befall Linda even as she returns, 28 years later, as the jacked action heroine in “Terminator: Dark Fate.” Tim Miller (“Deadpool”) directs with Arnold Schwarzenegger reprising his cyborg role and several actors joining the franchise for the first time—Mackenzie Davis, Natalia Reyes and Gabriel Luna.

“I was injured by my dog (Turk) so I have staples in the back of my head right now and some whiplash,” shared the actress who first played the mom-to-be of humanity in director James Cameron’s two sci-fi/action classics, “The Terminator” and “Terminator 2: Judgment Day.” It’s James’ return to the blockbuster series since “Judgment Day,” but this time, he’s only doing screenwriting duties.

“He’s a big dog,” added Linda about her pet. She lives an otherwise quiet life in New Orleans, Louisiana, after years in Malibu, California. “He’s an Anatolian Shepherd. I was having a moment of fun and he carried it a little far. He pushed me back into the table and I’ve got big lacerations. Some fun.”

“Everybody is just doing everything they can to get me out of town on the road,” explained Linda about her gracious neighbors’ gestures to help her do press for “Dark Fate” despite her injuries. “It’s just the most wonderful, authentic life (in New Orleans).”

Proudly wearing the wrinkles she has earned through the years—she wore the lightest makeup—and her long blonde hair now cropped short, Linda, 63, pondered about a line in the new film that says we can change our fate. She talked about the choices that also alter our destinies, but then there are … accidents.

“Yes, we make choices but then accidents happen—accidents of fate,” said Linda, who studied under Lee Strasberg in New York, hoping to be a Shakespearean actress. “I almost didn’t get to play Sarah Connor in the first film because … I guess I’m very injury-prone. I had twisted my ankle, broken a bone and tore ligaments.

“I kept it hidden from them (‘The Terminator’ producers) because I was young and stupid. I didn’t know how bad it was. I just rested it for three weeks, then I got on it. I could barely walk.

“For the first few weeks of the film, I was limping every single day. That little thing might have kept me from playing Sarah Connor and you’d be sitting up here with Jennifer Jason Leigh, instead. So, there will always be those accidents.

“I do believe that hopefulness, strong character, hard work and good manners will get you pretty much anywhere that you need to go. You don’t have to be the genius but if you have the work ethic, kindness and interest, that compensates for genius almost every time.”

But mishaps keep getting in the way of Linda’s best intentions in some of her personally significant projects—like one first shooting day of a movie that she will never forget. 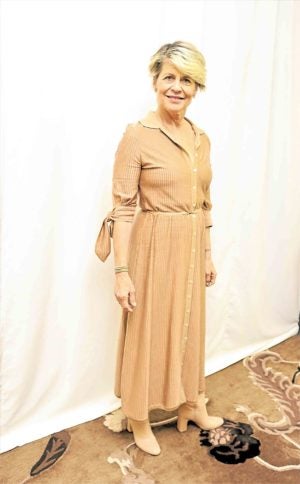 “This first day was the worst first day I’ve ever had on a movie,” she began. “Many years ago, so many that I cannot tell you actually what film it was, I accidentally ate marijuana cookies from a tray. I was young, stupid and hungry, and I was at a friend’s house. I thought, these cookies are great.

“I literally started a motion picture the next day as the leading lady. And I don’t remember that day. We tried to get me to throw up, but my fingers don’t reach the back of my throat. My friend was reaching his fingers down my throat. I drank soap trying to get the marijuana out [of my system]. So that was a bad first day but I don’t remember it, so it’s perfectly fine (laughs).”

And there was her first day on the set for “Dark Fate,” which also reunited her with her ex-husband, James Cameron, on a project.

They fell in love on the set of “Judgment Day” after she and her first husband, Bruce Abbott, divorced.

“This was also the worst first day because you think you are 100-percent ready and you’re in Spain,” Linda recounted. “They’ve got a coat over you because there are so many people trying to get your picture. Thousands of people on the street. There’s no real crowd control. Everybody wants the first shot of you, so they’re covering you up and throwing you in a room.”

“The girls (Mackenzie as Grace and Natalia as Dani) had been there for two days. Jim (Cameron, writer) had rewritten the scene, sent it the night before, so I’m good to go. I’m ready. But I get there, and in the scene, the first thing Sarah Connor says when she pulls up in this van is, ‘I need answers from you two, get in the car.’ Well, Grace is lying on the sidewalk, unconscious. Jim did not know this.

“So, the whole scene immediately doesn’t work. Everything has to be rearranged. They can’t print anything (their new lines) out for us. Then, Tim (Miller, director) doesn’t like it, so he writes his version of the scene. I had first-day jitters.

“I’m proficient with weapons, but they’re shooting it from my hand and it’s like this (demonstrates her hand shaking) because that’s how intense this first day is. They couldn’t print anything out for us, there were too many people and, at one point, the camera is rolling and they’re on me.

“Natalia is down on the ground and she looks up at me (laughs) in our first day together. She goes, ‘Are we doing the long one (scene) or the short one (laughs)?’

“It was like a guessing game the whole day. I was, oh my God. I went home in tears. I emailed Jim and I was, this is not going to work with you writing stuff and, of course, we reshot all that. There was just no way that that was a good start for any of us.

“I went home that day going, what have I done, this is going to be terrible. But we worked it out. But just looking at Natalia, she’s down on the ground (laughs). Not the first day you were hoping for. Bring the marijuana over (laughs). Marijuana cookies—I didn’t even know there was such a thing when I had those. I had no idea.”