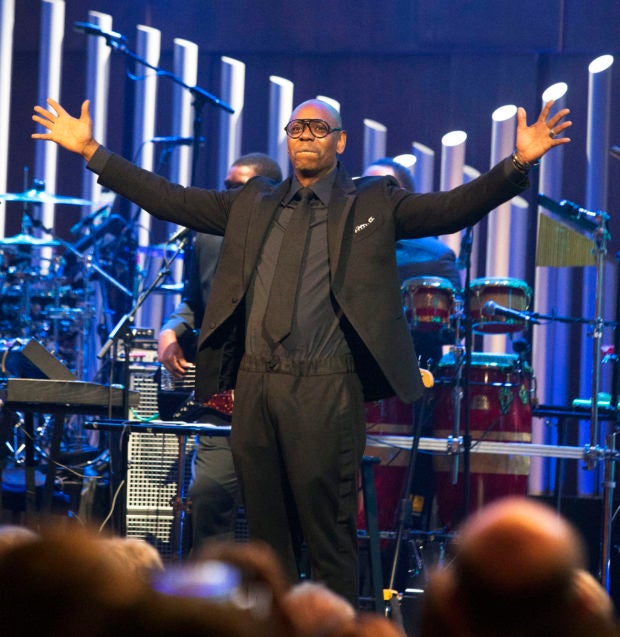 Dave Chappelle is honored with the Mark Twain Prize for American Humor at the Kennedy Center for the Performing Arts on Sunday, Oct. 27, 2019, in Washington. Image: AP/Invision/Owen Sweeney

WASHINGTON — Dave Chappelle has built a career on pushing boundaries and challenging social conventions. But his greatest act of defiance may have come Sunday night at Washington’s Kennedy Center for the Performing Arts.

At the end of an evening of tributes and testimonials, Chappelle came on stage to accept his Mark Twain prize for lifetime achievement in comedy with a lit cigarette in hand.

“I want every in America to look at me smoking indoors,” he announced. “I didn’t ask anybody. What are they going to do? Kick me out? This is called leverage!”

A host of comedians and musicians paid tribute to Chappelle, 46, describing him as a uniquely gifted and passionate performer with a sort of pied piper appeal that drew other artists into his circle.

“He’s a beacon for a lot of different progressive thought,” he said as he entered the Kennedy Center Sunday night.

“He’s always been a leader in thought and culture. He says provocative things and I respect that. He brings uncomfortable things up and now we have to discuss it,” he said. “I think he’s one of the greatest, not just entertainers, but the greatest minds we have in this day and age.”

Michael Che, co-host of Weekend Update on “Saturday Night Live” called Chappelle, “the entertainment equivalent of what they call a five-tool player in baseball. He can perform, he can write, he can do characters. That’s why his fan-base is so wide.”

Sunday night’s ceremony was a homecoming for Chappelle who was raised in suburban Silver Spring, Maryland and attended Washington’s prestigious Duke Ellington School of the Arts.

“Going there was one of the great privileges of my life,” he said on the red carpet. “D.C. in the ’80s was turbulent and I met a bunch of young black artists who taught me it was OK to be different. It was OK to be weird.”

Chappelle was already a well-established comedian and comedic actor when he was given his own sketch comedy show in 2003.

At the height of his popularity, Chappelle shocked the entertainment industry by walking away from a lucrative contract extension and abandoning the show while it was preparing for its third season. He disappeared from public view and took an extended trip to Africa. He later explained that the pressures of the show’s success and the influence applied by the network made him feel “like some kind of a prostitute.”

Chappelle gradually returned to performing, more powerful than ever, and now releases regular stand-up specials under a multimillion-dollar deal with Netflix. The departure from his own hit show made him an inspirational symbol for artists and comedians, particularly minorities, for his willingness to sacrifice profit to retain his independence.

Jon Stewart, former host of the “The Daily Show”, spoke of Chappelle’s decision with respect, saying he and other comedians were in awe of, “the courage that it takes as a performer or an artist to stand for who you know you are — to take a chance on yourself.”

“For someone to say, ‘I’m stepping away from this because it just doesn’t feel right in my soul.’ Not a lot of people think like that,” Common added.

Musician John Legend paid tribute to Chappelle’s passion for music and determination to use his influence to spotlight different artists. At the height of his fame, Chappelle organized “Dave Chappelle’s Block Party” — a movie built around an all-star concert featuring Legend, the Roots and a reunion of The Fugees.

“He’s a gifted curator who blends different worlds seamlessly,” Legend said. “That’s why you see so many musicians coming to this stage to pay tribute.”

Chappelle spoke with reverence about the Mark Twain prize and the “art form” of stand-up comedy. He noted that the list of previous recipients reads like a roll call of his heroes, including Richard Pryor and George Carlin.

“To be on a list with Richard Pryor is just unfathomable to me,” Chappelle said. “The shoulders that I stand on are all here on this list.”

The ceremony will be broadcast Jan. 7 on PBS. IB/JB

18th Tribeca opens in Harlem with ‘The Apollo’