“Finally got my first of three dengue shots but had to come to Bangkok for it,” the actress said in her Instagram post yesterday, Oct. 21.

Fernandez said that receiving the vaccine was only safe for people who have contracted dengue before, after being asked about the vaccine’s safety. The actress revealed in an earlier post that she had the disease in the past. 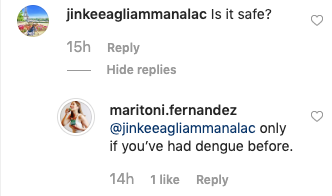 The Dengvaxia vaccine has been the subject of controversy after its manufacturer, French pharmaceutical group Sanofi Pasteur, released results of its long-term, follow-up study last November 2017. The study found that the vaccine may cause an increased risk to patients who received it without prior history of dengue infection.

Following the results of the study, Dr. Erwin Erfe, chief of the Public Attorney’s Office Forensic Laboratory, stood firm on the findings of his forensic team about the vaccine, which claimed that Dengvaxia was linked to the death of 105 people, after his team performed autopsies on them.

Meanwhile, the Department of Health (DOH) stated last January that no death has been confirmed to be directly caused by Dengvaxia. Health Secretary Francisco Duque III, then, explained that the cause of death in the reported cases was dengue or other diseases.

Despite the DOH’s earlier statement regarding the vaccine, the department has refused to lift the ban on the use of Dengvaxia in the Philippines. Duque clarified that the decision to keep the ban had nothing to do with the efficacy of the vaccine.

DOH cited Sanofi’s failure to submit post-approval requirements as the reason behind the decision. The DOH added that Sanofi may re-apply for a new certificate of registration at the Food and Drug Administration.  /ra