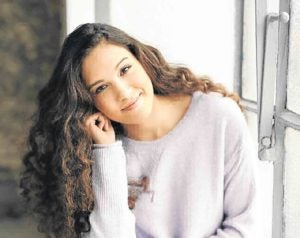 With her love for “emotionally charged and meaningful ballads,” German-Malaysian pop singer Natasha Sass hopes to make a connection with Filipino listeners—many of whom also have an affinity for such style of music.

“I have learned that Filipinos love listening to ballads, so maybe I can do more of that as I try to do more projects here. I want to create and share with them music that’s as sincere as possible,” she told the Inquirer in a recent interview. “I’ve always been open to trying different genres. But pop ballads and R&B are where I usually gravitate.”

This young singer-songwriter was born in Singapore to a Malaysian mother and a German father.

At age 10, she moved to Kuala Lumpur, where she has already scored a chart-topping song—the uplifting anthem “Indestructible,” which she worked on with American songwriters in Nashville, Tennessee.

She has also released records in Germany and dabbled in the popular local genre “schlager”—a style characterized by simple and catchy melodies with lyrics that are often sweet and sentimental.

Among her most memorable gigs, she recalled, were opening for concerts of such music stars as Bruno Mars, Usher and Brian McKnight. She also sang the Malaysian national anthem at Sen. Manny Pacquiao and Lucas Matthysse’s bout last year in Kuala Lumpur.

Now, Natasha is focusing on English pop music and expanding her audience in Southeast Asia. The 19-year-old recording artist recently flew to Manila to do mall shows and release her new R&B single, “Your Story.”

While the prospect of releasing songs in the Philippines excited her, she admitted that there was also a tinge of intimidation, because she feels that Filipino fans can be discerning.

“I know that the local music industry has high quality. And that makes this country a good place to introduce new songs,” said Natasha who can speak and sing in English, German and Bahasa.

Natasha, who looks up to the likes of Michael Jackson, Beyoncé, Ariana Grande and Ed Sheeran, is still familiarizing herself with the music scene here, but she’s well-aware that the country is home to talented vocalists.

“I’ve heard of Darren Espanto, Jake Zyrus and Morissette—lots of big voices!” she said. “I hope to collaborate with more local artists someday.”

Her voice isn’t as powerful as the singers she mentioned, she admitted, but she does have her own style.
“My voice is lighter, more lyrical, I would say. What’s important is staying true to yourself; we’re all unique,” she stressed. “You just have to put your own touch.”