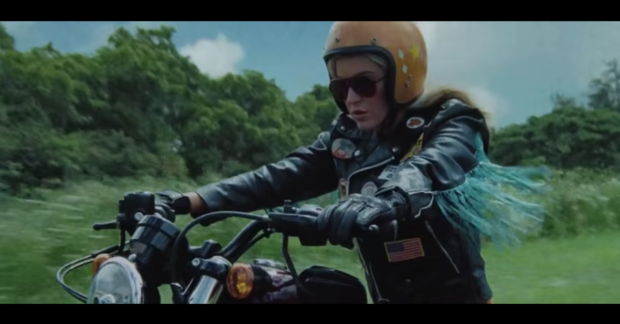 “Harleys in Hawaii” marks the third single from the pop powerhouse as lead artist this year.

For the occasion, Perry co-wrote the song with fellow chart-topper Charlie Puth as well as Johan Carlsson and Jacob Kasher, all of whom she collaborated with on her recent single “Small Talk.”

The songstress also released the accompanying music video for “Harleys in Hawaii”, which was helmed by Barcelona-based directors collective Manson. The visual shows Perry hitting the roads of Hawaii on a Harley, stopping along the way to drink cocktails and sing karaoke at a tiki bar.

“Let me run my fingers through your salty hair/Go ahead, explore the island vibes/So real that you can feel it in the air/I’m revvin’ up your engine,” she seductively sings in one of her verses.

She ends up meeting a mysterious biker with whom she drives away at the end of the video.

“Harleys in Hawaii” arrived a few weeks after the previously issued singles “Small Talk” and “Never Really Over” — which will likely appear on Perry’s forthcoming new album.

The yet-untitled album will mark the Grammy-winner’s sixth studio effort, following her 2017 “Witness”.

Earlier this month, Perry also announced that she filed an appeal of the July decision that found her and her label liable for $2.78 million (P142 million) to Christian rapper Flame for plagiarizing elements of their 2013 hit-song “Dark Horse” from his 2008 “Joyful Noise”.

As Variety reports, part of the appeal relies on the relative popularity of Flame’s hit, pointing out that “[p]laintiffs did not offer proof of one single digital or brick-and-mortar sale of ‘Joyful Noise’ or [the album] ‘Our World Redeemed’ and admitted that they have no such evidence.” CL/JB

Katy Perry, others must pay $2.78M for copying song