Aaron Paul: From ‘Breaking Bad’ to ‘El Camino’ and beyond 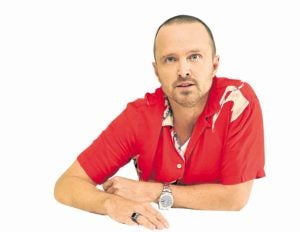 LOS ANGELES—“I haven’t slept at all. I just wrapped ‘Westworld’ a couple of hours ago, so bear with me,” Aaron Paul said at the start of our interview.

“We did our final day of shooting for Season Three and we have been on nights for the last two weeks,” added Aaron, who wore a shirt that was so bright red it could wake up anyone, including the actor.

Aaron postponed sleeping this morning to talk about Netflix’s “El Camino: A Breaking Bad Movie.” He reprises his Jesse Pinkman role in the film that serves as an epilogue to the hit TV series, “Breaking Bad.”

Vince Gilligan, the series’ creator, also wrote, directed and produced the neowestern crime film, which follows Jesse who is on the run, amid a massive police manhunt for him. The film picks up after the events in the finale of the AMC drama set in New Mexico about a high school chemistry teacher, Walter White (Bryan Cranston) and his bitch-uttering partner, Jesse.

At 40, Aaron still looks boyish. He and his wife, Lauren Parsekian, have a daughter, Story Annabelle. Aside from “Westworld,” where he plays Caleb, Aaron stars in another series that premieres in December, “Truth Be Told.”

Can you talk about the coming season of “Westworld”? “Westworld” is such a big, ambitious, crazy complicated show. And it continues very much down that path. It gets even more vicious. It takes the audience and these characters outside of the park. So, you have a different look at the world that surrounds these parks.

Can you also talk about your project choices since “Breaking Bad”? It’s just about if the story speaks to me. For some reason, I find myself gravitating toward roles where these characters are dragged through the mud. They are beaten down, but they come back and have some sort of survival fight in them. But yeah, just something that takes me out of my comfort zone, in a way.

How was it, as an actor, for you to come back to Jesse in “El Camino”? It’s interesting. I thought I said goodbye to this character six years ago. I think we all did. I thought the way Vince (Gilligan) and the rest of the writers decided to end the show was nearly pitch-perfect.

But when Vince called me and said that he had this idea to continue with this story, I just told him, “Yes, of course, just tell me when to show up and I’ll be there.”

It felt good to get back into Jesse’s skin.

If you wanted to relocate to start a new life like Jesse, where would you like to settle down? A place in the mountains, surrounded by lakes or rivers. Also, Hawaii is nice. Some place peaceful with a lot of water and booze (laughs). A lot of Mezcal, yes, a lot of Mezcal.

What did you like about returning to the “Breaking Bad” world? It’s been so long since I played this guy. I was a little concerned before I read the script.

I read the script for the first time inside Vince Gilligan’s office, just lying on his couch, flipping through the pages. I instantly knew how I was going to portray this guy in these scenes.

I didn’t spend much time on the rehearsal process. It was just getting the lines down. I winged it on the first day really because I felt like I lived and breathed every moment of this guy’s life onscreen.

Do you think this Jesse character defines you as an actor in a way because people still stop you on the street when they see you? Yeah. “Yo, Jesse (laughs)!” I don’t think it necessarily defines me, but I definitely think it introduced me to many people.

Do you oblige when someone asks you to call him/her a bitch? I used to, a lot. Now, I ignore the question, but sometimes I will yell out “bitch” every now and then, yeah (laughs).

How did you feel when the Saul Goodman character was the one that got a spinoff series? I was so happy. I love “Better Call Saul.” What Bob (Odenkirk) is doing on that is just wonderful.

I’m blessed to have “Breaking Bad” and to have Jesse Pinkman. That was the role of a lifetime for me.

Six years later, I got “El Camino” coming, which is such a strange surprise and a gift in itself. I’m just happy to have a job.

Do you worry though that you may be typecast and not get the other roles that you want?: No, I don’t think I’m typecast. But my God, I can’t tell you how many roles were offered to me once I was doing “Breaking Bad” that were drug-related. I just try to stay as far away from that thing as possible.

Can you talk about the international response to “Breaking Bad”? Everywhere I travel in the world, it feels like “Breaking Bad” has a huge impact. In LA, for example, I get approached by people from Argentina who are visiting the States all the time. Like, “We love you in Argentina.”

My wife and I were traveling to the Maldives for our honeymoon years ago. We got off the plane in this small little airport. This guy is marshalling another plane, and he’s looking over at me. Then, he completely leaves the plane (he was marshalling), and he’s like, “Jesse (laughs)!” I’m like, “Hey, man.”

Do you still have conversations with Bryan Cranston? When Vince first gave you this “El Camino” project, did you give Bryan a heads up? Yeah. Bryan is one of my best friends on the planet. He was definitely one of the first people to know about this project. Right after, Vince talked to me about it.

How old is your baby now? She turned 20 months, my little baby girl.

Does she know what you do? She does. It’s so funny. Just the other day, my wife was driving around. She heard my baby girl in the backseat screaming, “Dada! Dada!” My wife was like, what’s going on? She realized that my baby was looking through the sunroof at a big billboard of “El Camino (laughs).”

I have a video of it—when they started driving away, she goes, “Bye, bye Dada.” It’s the best thing in the world.

After “Breaking Bad,” you took on “The Path” and “Westworld.” How do you balance having a newborn and your career, especially having to shoot night scenes? Yeah, it’s hard shooting nights just because during the day, I have to sleep. I’m not really able to spend as much time with my daughter and wife as I would like.

All the rumors of “Westworld” are true—it’s a hard show to do.

But we do have a lot of time off, as well. Every moment of my time off, I spend with my girls, and it’s just the best. But doing a show like “The Path,” for example, that show, playing a father to these two incredible kids really made me decide that I wanted to have children.

What do you want to do in the next decade? I would love to grow my family, have another baby, maybe two, and see how number two goes. And just try to find roles that challenge and inspire me. And yeah, just to have a lot of downtime in between.