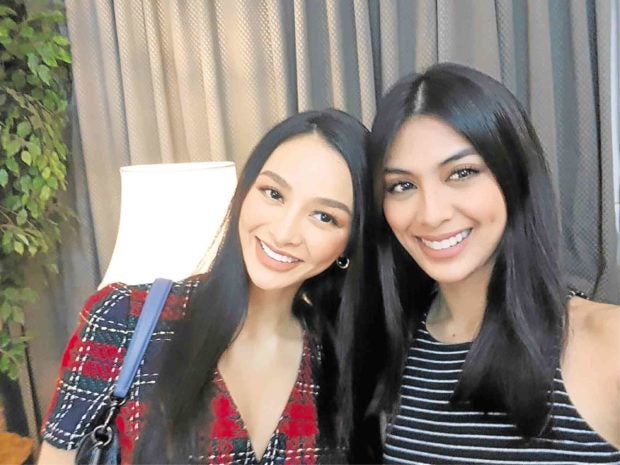 The photos, posted on the Bb. Pilipinas official Facebook page, were taken at Araneta City in Quezon City, where the national pageant is based.

Kylie, now a Kapamilya actress, was said to be offering advice to Patch, a lawyer, for the latter’s quest for the country’s seventh Miss International crown.

“I’m so thankful because she just squeezed me in her schedule,” Patch told Inquirer Entertainment at her sendoff press conference held at the Novotel Manila in Quezon City on Wednesday afternoon.

“She had another engagement. But when she was told I was also there, she was willing to give her time to me,” she said of Kylie, who appears in the ABS-CBN afternoon soap opera “Los Bastardos” with fellow Bb. Pilipinas queens Maxine Medina and Jean Saburit, and current flame Jake Cuenca.

Kylie spoke at the Araneta City’s program for mental health, which has been her advocacy since her Bb. Pilipinas days, held at Gateway Mall.

What Patch thought would be a short conversation turned out to be a lengthy discussion.

“She told me all of her experiences in Miss International, the lessons she learned,” Patch said.

“The first thing she told me was that when she came there, she wanted to prove to everyone that she deserved the crown. She didn’t go there thinking that she had already won,” Patch shared.

“I think that is valuable advice, because it would seem too arrogant if you go there thinking the crown is already yours,” she explained.

To prove she deserved the crown, Kylie was “on point” and “in fighting form” every day during the global competition, Patch said.

The 25-year-old graduate of the University of the Philippines College of Law said all the advice and information she had been receiving had been useful in quelling her jitters.

“She gave me an idea of what to expect. I think I’ll adopt the mind-set that she had,” Patch continued.

Of all the global beauty contests, the Philippines is the most successful in the Japan-based Miss International pageant, with six winners, second to Venezuela’s eight crowns.

“Maybe we know what the Japanese want, what the organization wants. Maybe we have similar cultures,” Patch surmised.

For the 59th edition of the Miss International pageant, Patch said the organization had highlighted the welfare of women and children as its main thrust.

“I believe it is consistent with my advocacy on social justice. I want to serve the marginalized, the underprivileged, and be the voice of the voiceless,” Patch declared.

The 2019 Miss International pageant will conclude in a grand coronation program in Tokyo, Japan, on Nov. 12.