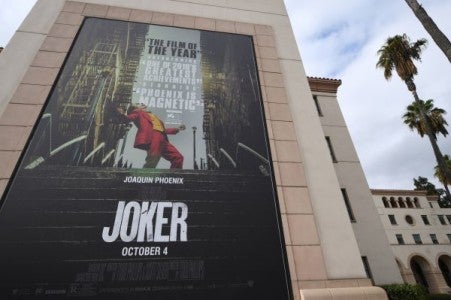 The Todd Phillips-directed origin story of Batman’s nemesis retains the top spot at the world box office for the second weekend in a row, according to Comscore date. Since its early October release,”Joker” has raked in over $544 million.

For the second weekend in theaters, the Joaquin Phoenix-led feature, which has been released in 80 markets, has generated a gross of $178.7 million. “Joker” surged ahead of Ang Lee’s sci-fi opus “Gemini Man,” starring Will Smith. Over its debut weekend, the production took in $51.6 million.

Chinese action flick “The Captain” stays in the third spot, adding $33.4 million to its tally.

Waiting for its spot on the podium is the animated reboot of “The Addams Family,” which came out on Oct. 11 and nonetheless took in $30.1 million.

Here are the top 10 movies at the world box office (in millions of USD):