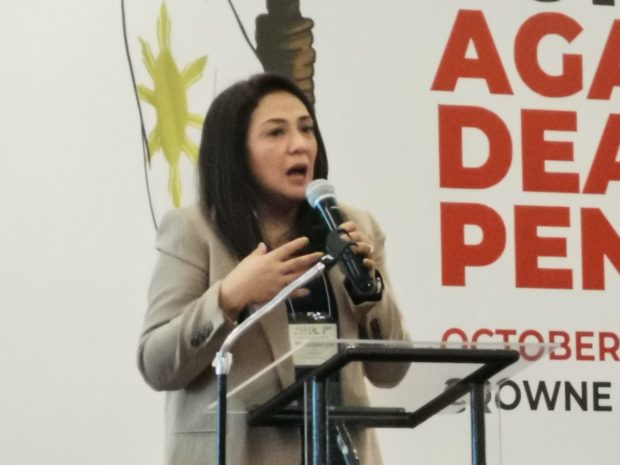 MANILA, Philippines — For actress Cherry Pie Picache, she thinks that addressing drug issues and the lack of education is the solution to ending crime rather than reviving the death penalty back in the country.

“What should really be addressed is the issues of drugs, [the] education of people to get them livelihood, those are the things that you can really address,” Picache said during the “National Congress Against Death Penalty” forum held in Ortigas, Pasig City on Thursday.

“I think basically, as a normal citizen, going back to the communities, I think what should be done now is the dissemination of information,” she added.

Basing from what she learned, Picache said that people may have want to revive capital punishment for “the safety of the community” due to the prevalence of illegal drugs.

“So what I’m basically saying is I think it’s really important to disseminate and correct the misconception of people that it’s an effective deterrent against crime,” Picache pointed out.

Picache is known to be a staunch advocate against the reimposition of capital punishment. She even affirmed her stance as Michael Flores, the suspect who robbed and murdered her mother Zenaida Sison, was sentenced to reclusion perpetua in December 2015.

Despite the gruesome murder, Picache chose to forgive Flores.

“Based on my experience, I think that the killer of my mom thought whether there was going to be death penalty or not. He was under the influence of drugs,” she looked back on what happened.

“He [Flores] just really wanted that immediate money to buy more drugs, kill my mother brutally without thinking if he was going to be punished or not,” she added.

“So basically, that’s the state of mind yung sa experience namin [on our experience]. So what I’m saying is that for people to realize that it is not really a very good deterrent against crimes.” /jpv