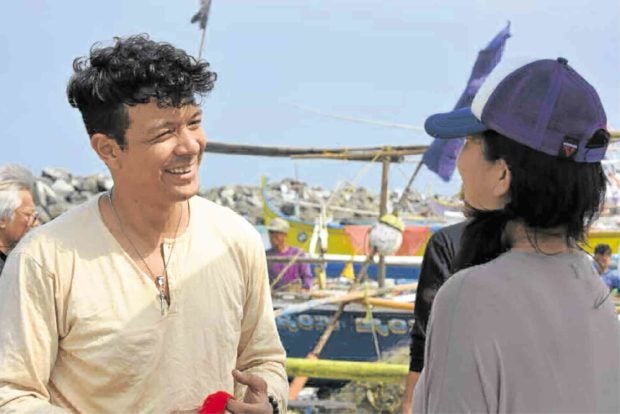 “His talent and screen presence were mesmerizing,” declared Eileen Cabiling, director of the short film “Basurero,” of her lead actor Jericho Rosales.

The film is premiering and competing (Wide Angle category) in the ongoing 24th Busan International Film Festival in South Korea.

“It is a real honor to premiere in competition at Busan IFF and it is my hope that this prestigious launch can elevate the subject of the film to the world stage,” the US-based Fil-Am director, who also penned the screenplay, told the Inquirer.

Eileen said she first collaborated with Jericho for a full-length feature, titled “Manhid,” which is currently in development. She was scouting for the actor to play a Filipino musician who immigrates to the United States when Jericho first came on her radar, the director recalled.

“I proposed to Echo (Jericho’s nickname) that we first make ‘Basurero’ as a way to build the actor/director rapport,” Eileen added. “Working with Echo has been a great joy and his professionalism and nuanced performance have exceeded my expectations.”

The 17-minute short is a fictional exposé inspired by actual events. It tells about the experiences of Bong (Jericho), a fisherman who struggles to survive and is unable to afford his sick daughter’s medication.

Reluctantly, he finds himself embroiled in a dangerous undertaking, caught in the net of the country’s unrestrained and violent war on drugs. He becomes a basurero (garbage man), working in the anonymity of night to dump the bodies of drug dealers and users killed by authorities. Wracked with guilt and fear, Bong feverishly seeks a way out.

Eileen said the story was born from “my desire to explore the postcolonist mentality of being Filipino.” She added: “The story was inspired by news of the day, but more importantly, I was drawn to the character’s struggle because I see this psychology in my own life and the historical forces shape so much of reality today.”

Coming up with a story that’s very Filipino in theme was easy for Eileen. After all, while she was born and raised in the United States, it was to parents who are Filipino immigrants. Growing up, she also spent a lot of time with her grandmother, “who shares stories of life in the Philippines.”

“I chose to cast, shoot and complete postproduction of the film locally because I wanted the film and the process to be influenced by the Filipino experience today,” Eileen declared.

She then described the experience of shooting the film in the urban fishing port and village in Cavite and in Metro Manila as “transformative. It has also been important to me to better know and honor my ancestral home.”