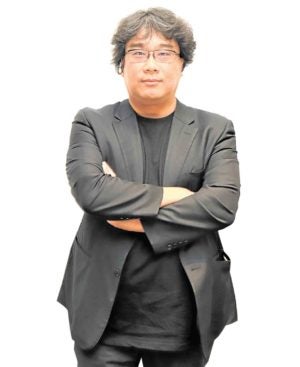 LOS ANGELES—Bong Joon-ho, the South Korean director whose “Parasite” won the plum Palme d’Or in this year’s Cannes Film Festival, cites the late Lino Brocka as one of the Asian filmmakers he admires.

In our recent interview, Bong, while talking about the directors he idolized in his formative years as a film talent, said, “When I was in university, I was a huge fan of Edward Yang and Hou Hsiao-hsien, the great Taiwanese directors. And also Lino Brocka—he was a strong master. He made such powerful films. I was in a cinema club when I was in university, so I studied so many wonderful Asian films at the time.”

With a grin, the 50-year-old whose “Parasite” is a strong contender for the best foreign film prize in the coming awards season, admitted that he watched “illegal copies” of some of the masterpieces of Lino, who died in 1991.

Bong, the first Korean director to win the prestigious Palme d’Or and who is noted for his thick mop of hair and dark clothes, was funny and eloquent in our chat, in which he occasionally spoke in English.
But he answered our questions mostly in Korean, which a female interpreter, who sat beside him, translated in English.

“Kim Ki-young was the Korean auteur in the ‘60s and ‘70s,” added Bong, who is married, with a son. “This movie ‘Parasite’ takes a huge inspiration from his classic movie called ‘The Housemaid.’”

Elaborating on how Lino and other Asian directors influenced him, Bong said, “The Asian masters I mentioned, I watched their films when I was in the study club in university. They are great, beautiful films. I analyzed them to figure out how those films were, rather than just purely enjoying them.”

Bong, whose other films include “Snowpiercer” and “Okja,” also revealed his other source of cinema when he was growing up.

“The funny thing was that when I was a little kid in Korea, there was a broadcast channel called AFKN or American Forces Korean Network,” he began. “It was some kind of broadcasting for American armies in Korea. Every Friday night, they had great movies—very adult, with sex and violence. My family members were all sleeping, but I was in the living room watching all those movies.

“It was how I saw the movies of John Carpenter, Brian De Palma and Sam Peckinpah. I discovered who they were in college and realized that the films I watched when I was little were all by these great masters.

“Because I didn’t speak nor understand English when I was little, I couldn’t understand any of the dialogue. I just imagined the story of those films as I was watching them. They really just piled up inside my body. They were R-rated midnight films that I watched.”

Exposure to those movies ignited the filmmaking ambition of Bong “around 11 or 12 years old, when I was in middle school in Korea. At the time, I already made up my mind to be a director.

“At the time, there was no Cinematheque in South Korea. Of course, there was no internet or DVD. So, I watched a lot of films that were broadcast on TV and cable channels. At 7, 8, 9 years old, I was a huge fan of Alfred Hitchcock movies and overwhelmed by his mastery of suspense.

“Slowly, as I became more and more fascinated by those films, my interest turned to what happens behind the camera. So, I started to discover more names of the directors, and I started memorizing them.”

After working in various capacities—cinematographer, lighting director, scriptwriter and assistant director—Bong directed his first feature, “Barking Dogs Never Bite.” This led to other films, including “Memories of Murder,” “The Host” and “Mother.”

The Palme d’Or for “Parasite” capped his rise in international cinema.

Bong also wrote “Parasite’s” story which narrates how members of the Kim family, played by Woo-sik Choi (Ki-woo), Kang-ho Song (Ki-taek), Hye-jin Jang (Chung-sook) and So-dam Park (Ki-jung), worm their way into a wealthy household by taking over jobs one by one, from a tutor, maid to chauffeur. 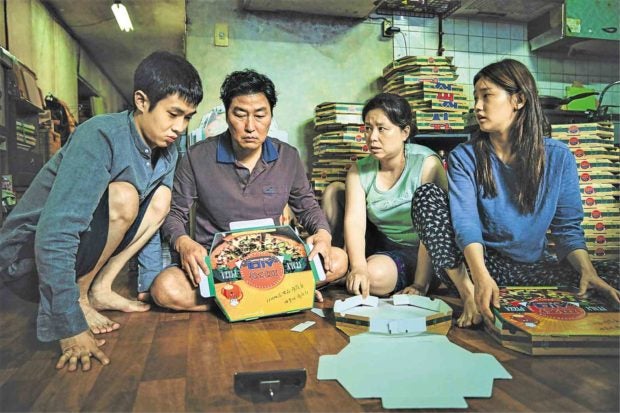 In the dark comedy that starts as an amusing and then chilling commentary on inequality, the Kims eventually take over the house of a rich couple (portrayed by Yeo-jeong Jo and Sun-kyun Lee).

“When the Kim family enters the house, it’s not as if the intention is to become rich,” Bong explained. “It’s just that they don’t have jobs. They are completely normal, capable, smart people.

“In the very last part of the movie, the young son said, ‘I will buy this house for my father.’ It’s quite sad. Maybe he already knows it’s impossible.

“I calculated that for the young guy, with his average salary, it would take maybe 547 years to buy the house. That says a lot about the gap between the rich and poor, and the polarization that’s so prevalent in society these days.”

On how the story reflects the economic disparity in South Korea, Bong pointed out, “This applies to other First World countries, as well—the richer the country becomes, the wider the gap becomes between rich and poor people.”

The film shifts midway, thanks to a twist, which takes the story from comedy to grim drama. “I am never aware that I’m doing that,” Bong admitted. “For me, it (shifting tones) is very natural.”

Finely acted throughout, “Parasite” takes a turn with this twist, when two characters emerge. “The basic original idea came to me in 2013, quite many years ago,” he recalled. “So, for four years, I kept thinking about it. I wrote a basic storyline in 2015—14 pages of a synopsis, a treatment.

“(Spoiler alert) At the time, there were only two families. I came up with the idea of the couple in the basement in the last two-and-a-half, three months of screenwriting. And that completely overturned the second half of the film.

On being moved by his own scripts, Bong shared with a sheepish grin, “Because it’s a solitary process and, oftentimes, I write late into the night and that’s when I would get pretty emotional.

“It’s quite embarrassing, but at 2 a.m. (laughs), sometimes I cry at the lines that I write. But the next morning, when I read that dialogue again in the bright morning, it really sucks (laughs).”

Hailed as his best film yet, “Parasite” is South Korea’s entry in the best international feature race in the coming Oscars.
The Netflix film, rated 100 percent on Rotten Tomatoes as we write this, drew unanimously enthusiastic response in film festival screenings.

“People seem to laugh and cry at the same time,” the director shared. “I thought about why the responses are so similar? It’s because the story about the rich and poor is very universal. Capitalism just surrounds us in our daily life, and I think that’s why.”