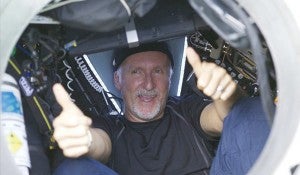 JOURNEY TO EARTH’S DEEPEST POINT Filmmaker James Cameron gives two thumbs-up as he emerges from the Deepsea Challenger submersible on Monday after his successful solo dive in the Mariana Trench. AP/NATIONAL GEOGRAPHIC

HONOLULU—Completing his journey to Earth’s deepest point, Hollywood icon James Cameron said on Monday the last frontier on Earth looked a lot like another planet: Desolate and foreboding.

Cameron described his nearly three hours on the bottom of the Marianas Trench, nearly 11 kilometers (7 miles) down in a dark freezing and alien place.

He is the only person to dive there solo, using a submarine he helped design and the first person to reach that depth—10,898 meters (35,576 feet)—since it was initially explored in 1960.

Cameron said he worried about being too busy with exploration duties to take in just how amazing the place was. That happened to Apollo astronauts.

So he said he took time to stare at the moon-like barren surface and appreciate how alien it was.

He described a barren “completely featureless, alien world” on the ocean floor, not  unlike the surface of the moon.   It was a “very lunar, very desolate place. Very isolated,” he said.

“I felt like I, in the space of one day, had gone to another planet and come back,” he said.

The acclaimed film director described the experience of hurtling down the “yawning chasm” of the ocean: “Falling through darkness—that’s something that a robot can’t describe.”

Cameron descended to the Challenger Deep valley of the Mariana Trench in the western Pacific, where temperatures are barely above freezing and the pressure is a crushing thousand times that at sea level.

He told reporters in a phone press conference that he was at the bottom of the ocean for a little more than two and a half hours, and had to cut short the planned stay of six hours because of problems with the ocean craft’s hydraulics system. 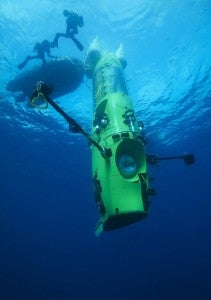 The voyage was the first manned expedition to the trench in more than half a century and Cameron said it was the culmination of more than seven years of planning.

The director of “Titanic,” “Avatar” and other films used a specially designed 12-ton submarine to explore and film the Mariana Trench, about 320 km (200 miles) southwest of the Pacific island of Guam, according to members of the expedition.

After a faster-than-expected, 70-minute ascent, Cameron’s submarine called Deepsea Challenger bobbed in the open ocean. A helicopter spotted the lime-green sub, which was expected to be plucked from the Pacific by a research ship’s crane.

There were no immediate reports regarding Cameron’s well-being. A medical team was present when Cameron, 57, emerged from the sub, according to the expedition.

The expedition’s physician, Joe MacInnis, told National Geographic News before the journey that recent test dives, including one that went more than 8 km (5 miles) deep, had gone well and that he expected Cameron would be fine.

“Jim is going to be a little bit stiff and sore from the cramped position, but he’s in really good shape for his age, so I don’t expect any problems at all,” said MacInnis, a longtime Cameron friend, according to National Geographic.

Because of its extreme depth, the Mariana Trench is cloaked in perpetual darkness and the temperature is just a few degrees above freezing, according to members of the team.

Cameron’s goal was to bring back data and specimens from the unexplored territory. He is expected to announce the results of the experiment later.

The tools taken by the explorer to the ocean floor included a sediment sampler, a robotic claw, a “slurp gun” for sucking up small sea creatures for study at the surface, and temperature, salinity and pressure gauges.

Upon touchdown, Cameron’s first target was a phone booth-like unmanned “lander” dropped into the trench hours before his dive.

The crescent-shaped scar in the Earth’s crust measures more than 2,550 km long and 69 km on average—that’s 120 times larger than the Grand Canyon. The Challenger Deep is more than a 1.6 km deeper than Mount Everest is tall.

“It’s really the first time that human eyes have had an opportunity to gaze upon what is a very alien landscape,” said Terry Garcia, the National Geographic Society’s executive vice president for mission programs.

Jacques Piccard, a Swiss engineer, and Don Walsh, a US Navy captain, are the only others to reach the spot. They spent about 20 minutes there aboard the US Navy submersible Trieste during their 1960 dive but couldn’t see much after their sub kicked up sand from the sea floor.

One of the risks of a dive so deep was extreme water pressure. At 10.9 km below the surface, the pressure at the bottom of the trench is a crushing eight tons per square inch—or about a thousand times the standard atmospheric pressure at sea level.

That pressure is the equivalent of three SUVs sitting on your toe. Pressure increases with depth. Reports from AP and AFP

Read Next
Major label boosts Ogie’s online store
EDITORS' PICK
EuroMillions Superdraw: A lottery draw unlike any other is coming to the Philippines
Smart releases Hyun Bin’s second TVC
Water remains our saving grace right now
‘Justice will be done,’ Duterte assures as he vowed probe on Jolo incident to bare ‘truth’
DOLE: Return of OFWs’ remains from Saudi to be ‘delayed,’ deadline moved to ‘early next week’
Current dominant strain of COVID-19 more infectious than original—study
MOST READ
BREAKING: Duterte signs anti-terror bill into law
Locsin warns of ‘severest response’ if China’s army drills in SCS ‘spill over’ to PH domain
Duterte tells military: No other president looked at you the way I did
‘Very timely, historic’: Senators laud passage of anti-terror bill despite ‘pressures’
Don't miss out on the latest news and information.