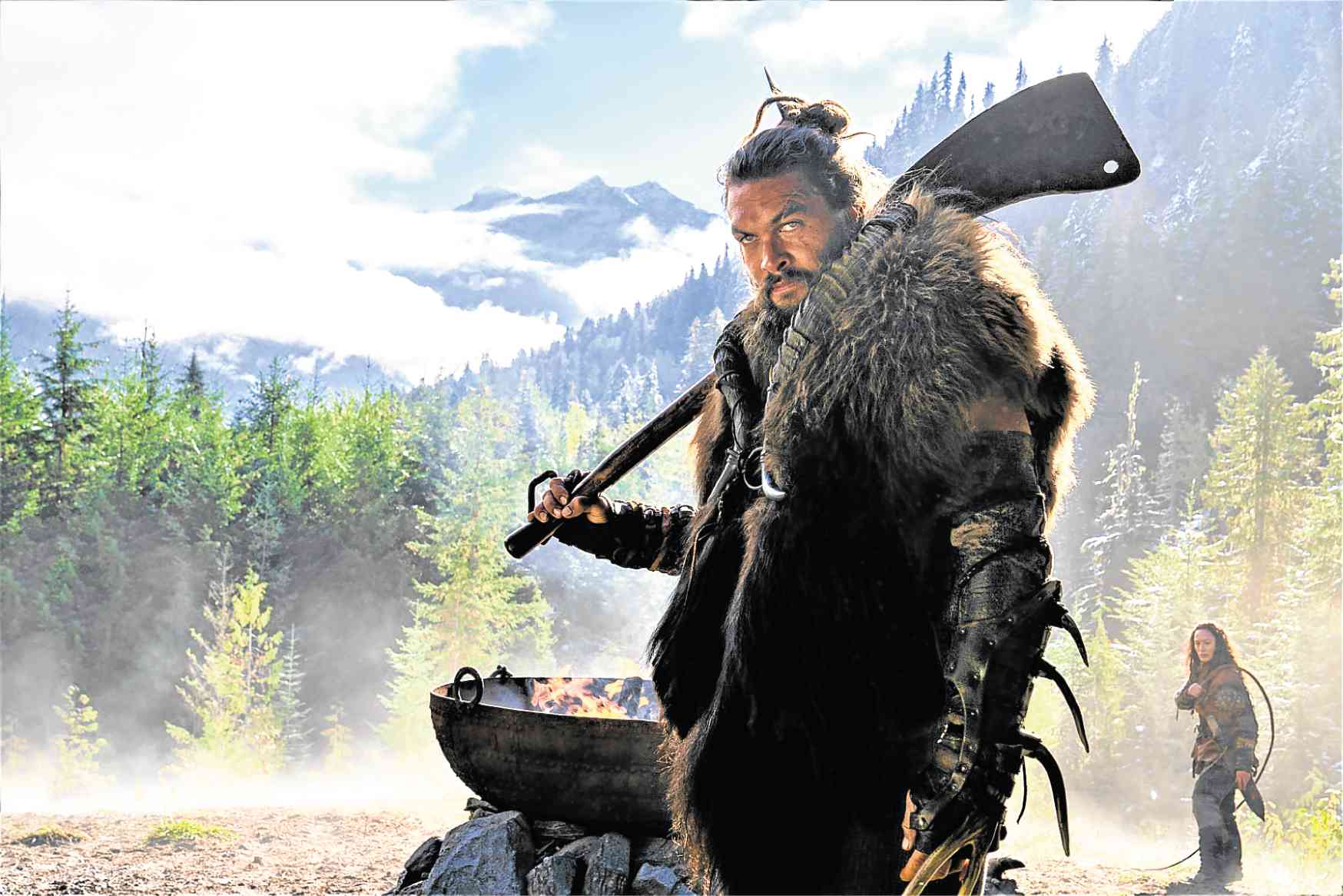 Jason Momoa stars as the father of twins with the mythic ability to see. —APPLE

LOS ANGELES—Out in the rugged, beautiful Minaty Bay, British Columbia, with imposing mountains in the background, we were very far from Hollywood. It was March 1, less than a week after the 2019 Academy Awards show.

In this remote outdoor location, Jason Momoa appeared in a huge trailer wearing the Fendi pink velvet tuxedo jacket that he wore to the Oscars and got favorable fashion buzz. “I really like it,” Jason smiled sheepishly about wearing the jacket. “I’ve already broken a button on it. I had to move the button up.”

But the jacket quickly came off. “Well, I looked dressy when I came in.” OK, please note that Jason did walk in looking dapper. “I looked good when I came in and all the clothes came off. My mom is going to read this and be like, ‘You didn’t dress, blah, blah (laughs).’ No, I wore all that stuff in there. I really burn hot, and I like to get comfortable.”

In his tank top and cargo pants, the 40-year-old actor, always easygoing and amiable, settled down to talk about what brought him to this wilderness. Later, he put back the jacket on when it was time to pose for pictures. 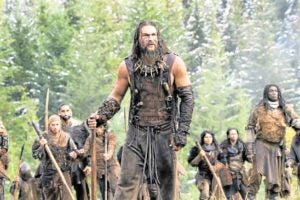 He is here shooting “See,” an epic drama starring him and Alfre Woodard. “See” will debut Nov. 1 exclusively on Apple TV Plus, Apple’s new and the first all-original video subscription service.

Apple describes “See” as a series that takes “place in the distant future, after a deadly virus decimated humankind. Those who survived, emerged blind. Jason Momoa stars as Baba Voss—the father of twins born centuries later with the mythic ability to see—who must protect his tribe against a powerful yet desperate queen who wants the twins destroyed. Alfre Woodard stars as Paris, Baba Voss’ spiritual leader.”

“See,” written and created by Steven Knight and directed by Francis Lawrence, who was behind “The Hunger Games” movie series, features cast and crew who are blind or have low vision.

Showrunner Dan Shotz joined the interview and explained the series’ premise: “A lot of the themes that you’ll see throughout the series are dealing with the idea of what sight brings to the table. Is this for the twins a sense of invincibility, or is this really a downside of being exposed to things that no one else is exposed to? And this is the constant struggle throughout the show.”

Dan added, “We don’t want to give too much away, but it really is a story about a husband and a wife and their two essentially adopted children. And this arc that these kids who have sight are going to go on, how does the father hold on?”

Joe Strechay, the series’ blindness consultant, who also sat for this chat, pointed out what he does: “We do sensory training for the show. I have trained thousands of people who are blind or visually impaired to have the skills to be independent. All of the actors went through training on how to utilize the white cane and, in our show, it’s a staff.

“I also taught the movement and the science behind it, how to move safely and independently and also how to use echo location, which is using sounds similar to bats sending out sounds that actually lights up your visual cortex in the same way that your peripheral vision works.

“We train our actors on the portrayal of blindness. We have actors who are blind or visually impaired and actors who are not. We give them the basic skills that allow them to portray the character, and they take it to a whole different level because this is 600 years in the future, where social norms like eye contact are gone, for example.

“We have over 30 actors who are blind or visually impaired participating in the show, and it is still growing. By the end, it will be more.”

Joe, who is visually impaired himself, cited Jason. “He is an amazing learner and intuitive, as well.”

Jason, who filmed the series amid the huge box-office success of “Aquaman,” said he did not hesitate to go into television. “This role is unbelievable. It’s an eight-hour movie. I don’t think of it that way (as a TV show). I’m just going after characters now. I never had this opportunity where doors are opening now because of ‘Aquaman.’ So this was super exciting. It’s very challenging, and I love that.”

On the challenge of playing a blind man, especially one who leads in these epic battle scenes, Jason answered, “When we are trying to flee from them (the other tribes), we’d have to cover ourselves up with different types of clays and things, so we can realize who we’re fighting with in battle. So I am not killing my own people.

“As far as stunts go, it’s amazing because it’s so intimate and when you get in there and are picking something apart, it’s not like, ‘Arrr!’ It’s total intimacy that is beautiful but pretty savage in the things that we do. But like I said, it’s something you haven’t seen because in these massive battles, there are killing ropes. So you’ll hear those sounds.

“And how I fight is basically all the time, I wanted to do it very low. So, I came in with my own ideas and how I would want my character to walk. I’m very scarred up on my face and I wanted to use his head as almost like a shield, which is like what happened to me in real life (laughs).”

We watched the filming of scenes featuring the tribe of Jason’s Baba Voss character walk along the bay, which was chilly even on this sunny winter day.

“See’s” first trailer looks spectacular, since the production made it a point to shoot outdoors, in various remote locations across British Columbia.

Dan said, “Francis Lawrence pushed all of us in his brilliance. He said, ‘We’re building all of these for real. It’s 600 years in the future, but we are also going out to all these amazing locations and building this epic world. This was a huge challenge. Some days, we had to fly a plane to Vancouver Island, then drive two hours to set, every day.”

Jason said he was inspired shooting in the great outdoors. “We are five months into this now. I worked my ass off to get the character ready, so now, I have him in me. Each scene is different, and I prepare before I come. But it’s fun on this because I’ve only shot four days on a stage out of five months. We’re always outside, always fresh hair, pissing rain on us, beautiful sunshine or it’s freezing cold or snow.

“And so, we did that. I feel like, when the choices come around, I know what the character is going to do. It’s always fun showing up on set because these sets are unbelievable. They’re amazing, and we are always outside and in these phenomenal locations.”

Looking at a picturesque bay on the horizon and snow-capped mountains in the background, we could only agree with Jason. We can’t wait to see “See.”