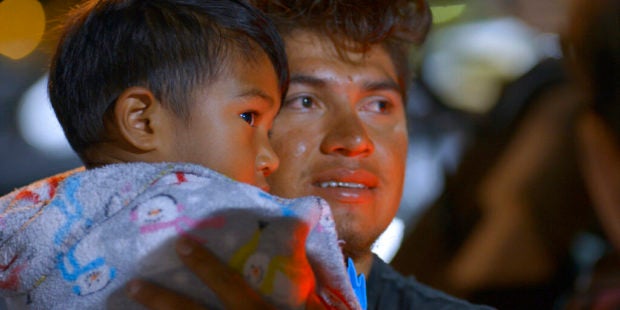 This image released by Netflix shows Luis Diaz, a migrant from Honduras who is living in the U.S. illegally, holding his son Noah in Kansas City, Missouri, before the child and his mother are deported in a scene from the six-episode docuseries “Living Undocumented” currently streaming Netflix. (Netflix via AP)

ALBUQUERQUE, New Mexico — After two decades in the U.S., Alejandra Juarez thought she had it made.

She came to the country illegally after fleeing violence in Mexico but had built a middle-class life in Davenport, Florida, with her husband, Temo, a retired U.S. Marine who voted for Donald Trump.

After Trump became president, Alejandra Juarez discovered that federal immigration authorities had taken an interest in her case. She soon found herself deported despite protests, a congressional bill and emotional pleas from her young daughters.

“Living Undocumented,” a new Netflix documentary series, investigates her story and the diversity of migrants caught in the intricate U.S immigration system where uncertainty and pain often battle dreams.

The six-episode series that’s now streaming follows the lives of eight families from Latin America, Israel, Laos and Africa who try to live normal lives in the U.S. despite family members’ immigration status.

For weeks, film crews follow families as they await immigration decisions and try to celebrate birthdays, bat mitzvahs and family cookouts in Florida, Texas and South Carolina. Families do their best to live in the present while threats of deportation loom because of changing policies and laws.

The series comes as Trump is trying to stop the flow of migrants, many of them fleeing violence, from coming to the U.S. through the Mexican border.

Luis Diaz came to the U.S. from Honduras by riding “the beast” — the feared train from Central America to Mexico. Ron and Karen, a couple from Israel who didn’t give their last names, left amid violence and overstayed their visas.

Vinny Phankhaysy, a refugee from Laos who has a South Carolina accent, faces deportation after the Trump administration determined a drug conviction 15 years ago made him undesirable.

Co-directors Anna Chai and Aaron Saidman said they wanted to create a series that allowed the immigrants to speak for themselves and in settings where they felt comfortable.

“After building trust, they were eager to share their stories,” said Chai, a daughter of immigrants who was exposed to immigration issues in the food industry while working on “The Mind of a Chef,” a popular PBS series.

Saidman said the filmmakers spent time with immigrant families in their everyday lives, as they crack eggs, check their phones, play with their kids and drive around town. Those often mundane habits show how migrants are just like everyone else despite their immigration status, Saidman said.

The series has no narrator. The only time immigration lawyers or policymakers appear are to explain laws or add context to situations. Everything else is told through the eyes of the migrants.

“It’s by design,” Saidman said. “Their dreams shape the series.”

But the series has horrific moments.

In the first episodes, we meet Diaz, who must turn over his son to his girlfriend, Kenia Bautista-Mayorga, who’s in detention in Kansas City, Missouri, and scheduled to be deported to Honduras with her child.

Diaz is also in the country illegally and must decide if he risks deportation himself by giving her a hug goodbye while handing over their crying son. U.S. immigration authorities go back on a promise to allow the couple to say goodbye outside the federal building. He must come inside.

“I feel guilty that I had it so easy,” Chai said.

Saidman said he and Chai did their best not to make political statements with the series. But he hopes viewers put pressure on elected officials to push for reforms.

“I’m really struck how hopeful all of the immigrants are,” Saidman said. “They still believe in the American system. As an American, this has renewed my faith in the American dream.”