Robin Padilla defends Mariel Rodriguez having baby in US 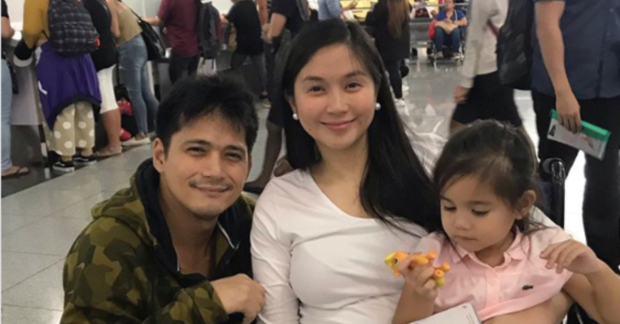 Robin Padilla justified his and Mariel Rodriguez’s decision to have the TV host give birth to their second child, Gabriela, in the United States.

Rodriguez gave an update about her pregnancy last Saturday, Sept. 28, days after she flew to the US to prepare for the delivery of their second child.

“Another update is her head is now down getting ready for delivery,” she said in her Instagram post on Saturday. “[Please] pray with me I really want to push for another vaginal birth.”

“Enjoying the last stretch of my pregnancy,” Rodriguez added.

Many of her fans wished her well, but one Instagram user, a certain @georg_supreme, did not seem to be in favor of Rodriguez’s giving birth in the US.

The netizen, addressing US President Donald Trump’s Instagram account (@realdonaldtrump), pointed out that Rodriguez only goes to the US to give birth. He/she added that it made Rodriguez a “birther,” and that it was not allowed.

After being asked by another Instagram user about what was wrong in giving birth in the US, the netizen chose to “research” about the celebrity couple. He/she then asked why would Rodriguez leave the Philippines to give birth if Padilla prided himself on being nationalistic. The said comments have since been deleted.

He then claimed that he and his wife are more American than those who speak English and live in the US, after pointing out that Rodriguez is an American citizen, and stating that he bears some Native American blood. 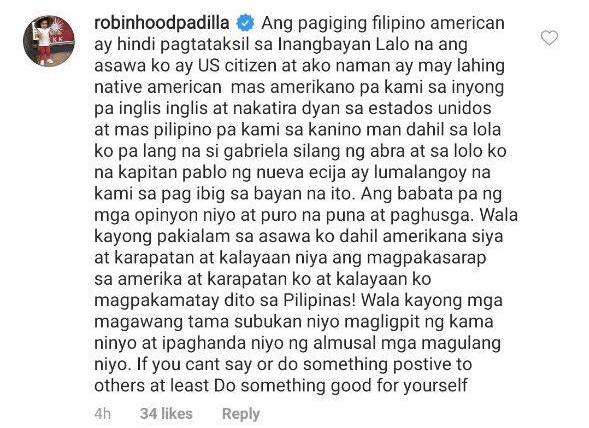 Padilla also said he and his wife were more Filipino than anyone else, citing that since his grandparents are the heroine Gabriela Silang and one Captain Pablo of Nueva Ecija, they bear great love for the Philippines (“lumalangoy na kami sa pag ibig sa bayan na ito”).

He added that those who think ill of Rodriguez giving birth in the US should not concern themselves with it since it is her right as an American citizen to give birth there. Padilla then stressed that just like it is his wife’s right to stay in the US, it is his right to die in the Philippines.

Rodriguez gave birth to their first child, Isabella, in the US back in 2016. She told Philippine Star last August that she wants to have baby Gabriela in the US as well, to give the baby “the same attention” she gave Isabella when she gave birth to her.  /ra