Television host Mariel Rodriguez stunned in a photoshoot recently where she showed off her baby bump, and was joined by husband Robin Padilla and their first child Isabella.

Rodriguez donned different dresses while posing with objects highlighting Filipino history and culture at the Museo de Padilla in Quezon City, as seen in her vlog on YouTube last Sunday, Aug. 25.

Museo De Padilla is an ancestral home which used to house the members of Padilla’s family.

“To me a maternity shoot is important. Ito ay isa sa pinakamagandang (This is one of the most beautiful) time in our lives. It’s not everyday na buntis tayo (that we are pregnant),” Rodriguez said. “It’s not everyday that we are growing life, nourishing life. It’s so, so special.”

She stated that she wanted to shoot at the Museo due to Robin’s patriotism and because the name of their soon-to-be daughter would be Gabriella, which is reminiscent of the name of a Philippine heroine, Gabriela Silang.

In one family photo, Rodriguez and Isabella donned matching Filipiniana dresses, in a shade of pink. 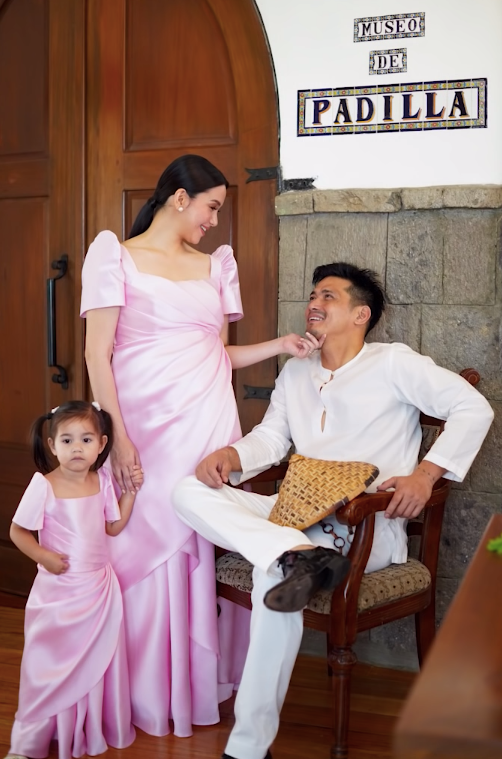 Rodriguez also wore other monochromic dresses in her solo portraits, where her baby bump is more prominent.

Padilla could not help wax sentimental over a photo of her in a long-sleeved black dress, as seen in her Instagram post on the same day.

“For me in my 35 years of existence I think this is my most beautiful photograph,” she said.  “The beauty comes from the life that is growing inside me.”

In another family portrait, they posed by a kalesa adorned with flowers. Mother and daughter wore similar white dresses with flower patterns sewn onto them while Padilla sported a soft pink button-down.

The TV host broke the news of her second pregnancy last May on the noontime variety show “It’s Showtime”. Rodriguez and Padilla welcomed their first daughter in November 2016. JB