The former PBB host could not help but gush over the sweet gesture in celebration of her second pregnancy. She took to Instagram yesterday to express her gratitude and to share photos from the surprise. 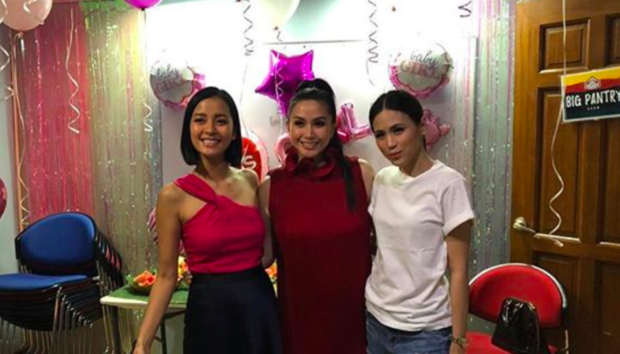 From left, Bianca Gonzalez, Mariel Rodriguez and Toni Gonzaga at the surprise baby shower in the PBB house. Image: Instagram/@marieltpadilla

Rodriguez posed with fellow former PBB hosts Bianca Gonzalez and Toni Gonzaga behind a table decked out with food in a boodle fight style. The room was decorated with pink and white balloons, with some spelling out “It’s a GIRL.” Rodriguez is expecting a baby girl.

She also recalled how she was led to the PBB house where members of the reality show were waiting for her.

The host said that Asian Artists Agency asked her last Tuesday, July 2, if she would be willing to shoot a video tape recording (VTR) for “Pinoy Big Brother” on July 10. She agreed, and went straight to the PBB house after hosting noontime show “It’s Showtime” yesterday.

Upon arriving at the house, one Ms. Merce welcomed her into the pantry where food and decorations were prepared for the celebration.

Robin Padilla, husband of Rodriguez, also expressed his gratitude to the people of PBB for the thoughtful gesture.

Rodriguez broke the news of her second pregnancy last May 11 on “It’s Showtime”. She later revealed that the baby is a girl through her YouTube vlog last June. JB