A tale of two Elsas: Aicelle Santos and Celine Fabie 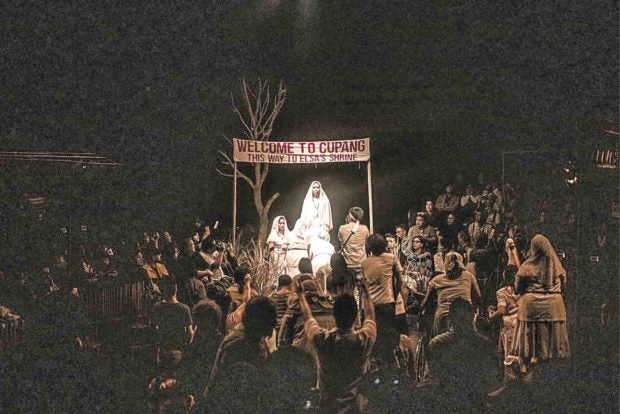 Thirty-seven years after “Himala” premiered in 1982, its themes continue to permeate viewers’ senses as it tells the story of the mystical
Elsa, originally played by Nora Aunor, who became a small town’s “savior” after she allegedly saw the Virgin Mary in an apparition.

The latest restaging of “Himala: Isang Musikal” is being mounted at the Spotlight Power Mac Center in Circuit Makati and runs until Oct. 20. This film-to-stage adaptation from scriptwriter Ricky Lee, with music by Vincent De Jesus, continues to examine religion, faith and fanaticism set against a poignant backdrop of longing, acceptance and a three-way friendship gone awry.

We asked director Ed Lacson Jr. what it was like mounting the show the second time around.

“Reruns are harder (laughs). Everybody knows that I hate reruns. When you mount something from scratch, there’s comfort in the process of trial and error. ‘Rediscovery’ is a word we use in rehearsals at reruns to remind everyone not to fall into a trap,” says Lacson.

Perhaps another part of this “rediscovery” is having two actresses, Aicelle Santos and Celine Fabie, alternating in the role of Elsa.

Lacson notes the striking similarity between the two actresses. “They both sing and act,” he says. “This is not an easy role to cast because the actor needs both the technical skill and the grit to pull it off.”

Aicelle did the first run last year under Ed’s tutelage before she left the country to join the UK/Ireland tour of “Miss Saigon,” as Gigi Van Tranh.

She got her start in the biz after placing first runner-up to another “Saigon” alumnus, Gerald Santos, during the sophomore season of “Pinoy Pop Superstar.” She was then signed by the Kapuso network as a solo artist, which led her to the pop trio La Diva, with Jona and Maricris Garcia.

But more doors opened up for Aicelle when she was “rediscovered” by director Nestor Torre for the revival of “Katy!,” followed by her stint in Peta’s “Rak of Aegis.” Thereafter, she joined the formidable cast of the screen adaptation of “Ang Larawan.”

For her part, Celine is the granddaughter of legendary actress Mona Lisa. But unlike Aicelle, she got her start in musical theater, playing roles in religious musicals like “Birhen ng Caysasay,” “Nasaan si Hesus?” and “Cory, the Musical,” also under Nestor U. Torre (NUT).

She then became part of the vocal septet, the Ryan Cayabyab Singers. In 2008, she won a National Book Award (for best nonfiction in English) for her lola’s biography, “Mona Lisa: A Portrait from the Memoirs of a Grandmother.”

Aicelle and Celine’s paths first crossed in 2013, when they worked together in “Katy!” By this time, Celine was already a regular actress in NUT’s productions, while it was Aicelle’s first theater outing, and in the lead role at that! It was from this production that the two ladies forged a bond, as their mutual admiration for each other cemented a friendship that lasts to this very day.

The irony is not lost on these ladies that they are now working on the same show years after they first met.

“I was so happy for Celine when I knew that she was playing Elsa. I wanted to break the news to her, but I didn’t want to preempt anything,” says Aicelle. 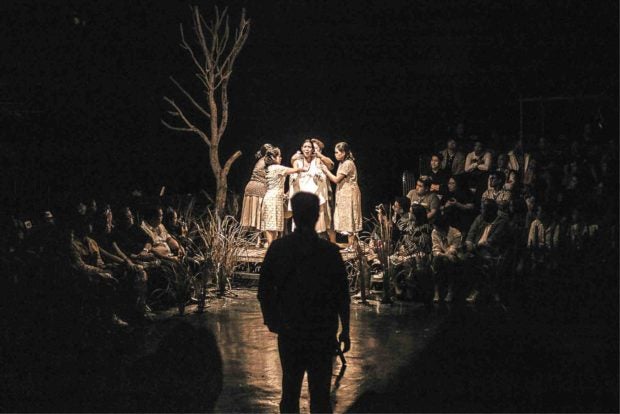 Little did Aicelle know that Celine also wanted to tell her the same thing.

What was even more serendipitous was that both Aicelle and Celine were pining for the same role: Nimia, Elsa’s childhood friend who returns to Cupang from the city to put up her own cabaret.

Celine adds, “My Lola played lead characters when she acted in prewar films. But from what I remember when I was very young, she was cast in kontrabida roles in films like ‘Insiang,’ where she played support to Hilda Koronel.”

Aicelle notes that Elsa’s story is timeless because “the story is distinctly Filipino. Ang daming kulay ng kwento. Just by reading the script, you cannot get the whole picture. I was only able to grasp it when I saw Celine run during rehearsals. When the focus shifts from the Virgin Mary to Elsa, it’s evolved into blind fanaticism.”

Celine relates, “It’s because Elsa is very human. On the surface, people see her as miraculous. Either that or she is really manipulative—a hero or a villain. Those are the only ways that you can see Elsa. If she makes you believe, then you are a believer. If not, you are a skeptic. Everyone in Cupang is searching for hope.”

What have they learned from each other?

“I love Celine’s nuances,” says Aicelle. “She has beautiful eyes—they say a lot of things. Vocally, she’s also very good. Which makes her perfect for for the character.”

Celine admits, “To be honest, I felt a little pressure because during my audition, ‘Himala’ was winning all these awards. The good thing about Ed is that he allows his actors to do their thing, as long as you tell your story truthfully. 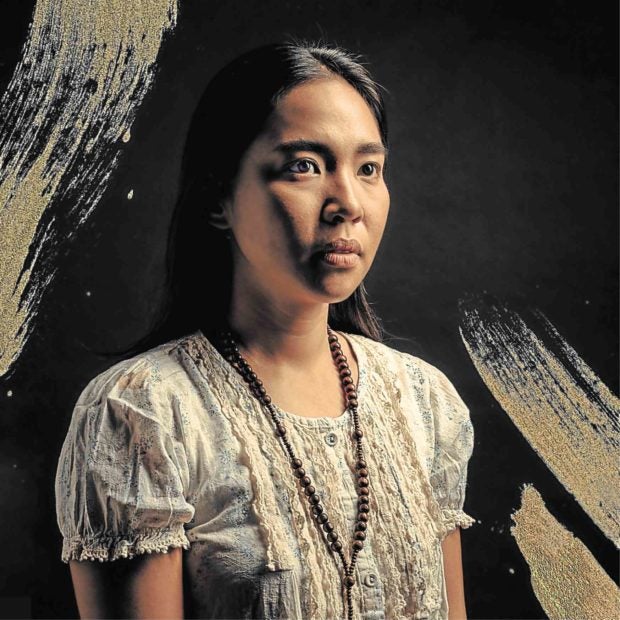 “Aicelle was generous enough to show me her notes from the first run. Throughout the whole process, she comforted me by telling me to take my time, because she had to go through the same thing.”

Having seen them both play Elsa, we can say that their approaches are strikingly different—one plays Elsa as a skeptic, while the other approaches Elsa from the point of view of an unfazed believer. To say which of them is more effective is something for the audience to experience for themselves.

“It’s really not about making them different or, worse, a copy of each other,” Ed says. “It’s about bringing out the best performance each of them can give.”

Speaking of miracles, we asked both ladies what they would consider as their personal “himala.” 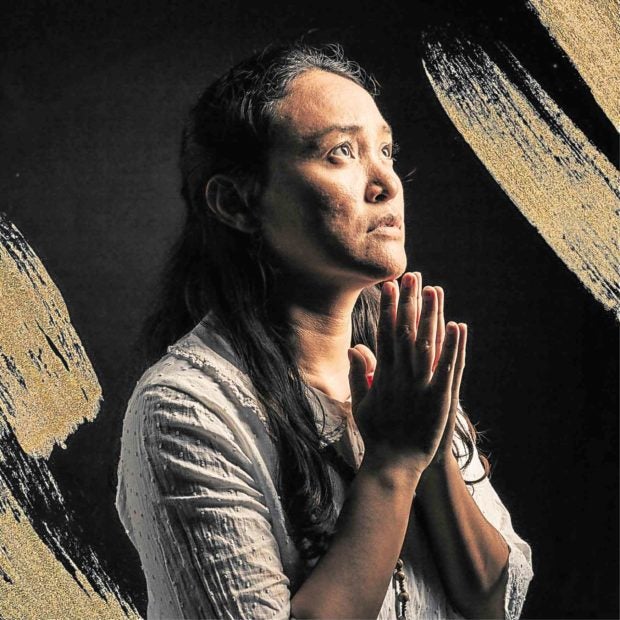 For Aicelle, “I have a lot of personal struggles in terms of my family’s health and welfare. Dumaan kami sa matinding pagsubok, but somehow, we managed to pull through. My family’s health and me doing theater—those are what I consider my biggest miracles. Everything else that followed is cherry on top.”

Celine shares, “My biggest miracle is that I am happy. ‘Himala’ is the universe’s answer to me for all my questions—and for everything that I went through in the last couple of years. I have never been more excited to go back to theater. I’m living from moment to moment, taking things as they come.”

Read Next
No culture clash between Benjamin and new girlfriend
EDITORS' PICK
Been there, done that but what’s the difference between MECQ and GCQ?
Smart 5G goes live
A gem of a residence in the new normal
Water remains our saving grace right now
BREAKING: 3,226 latest COVID-19 cases bring PH’s total to 106,330
PNP: Checkpoints back in MECQ areas
MOST READ
MECQ guidelines in infographics
Health workers decry colleague’s death from virus; accuse gov’t of neglect
Lacson takes up cudgels for health workers ‘threatened’ by Duterte
MECQ in NCR, other areas: Mass transportation suspended, quarantine pass required anew
Don't miss out on the latest news and information.