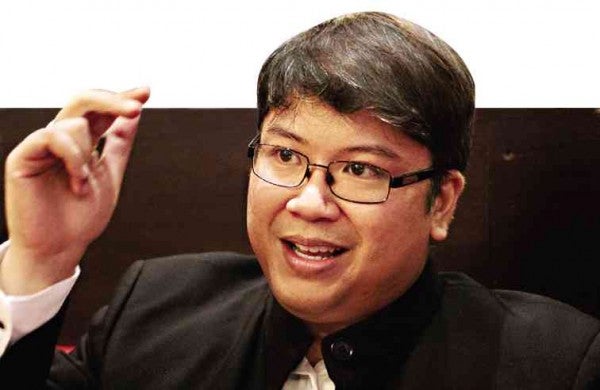 Last Saturday, Sept. 21, trombone artist Allen Meek of the Singapore Symphony Orchestra complained on Facebook about his experience with PAL. “Never fly Philippine Airlines from Manila as they have a ZERO TOLERANCE policy for all hand carry musical instruments (must be checked in) with the exception of ukulele only. For ‘safety and security’ reasons. Ridiculous,” he wrote.

Salonga shared the post on Sunday, Sept. 22, and politely asked the airline: “Is there a good reason (beyond ‘that’s our policy’) why you don’t allow musical instruments as carry-on baggage, except ukuleles – even if they clearly fit? I’m sharing a post from a professional musician who works in Singapore and loves to visit our country.”

Dear Philippine Airlines, I am a professional musician. So is my wife, and so is my sister Lea Salonga who used to be…

PAL through its official Facebook page responded to Salonga and explained that instruments are not allowed as carry-on baggage “due to the limited overhead space.”

“Moreover, passenger safety is our utmost priority which is why instruments are not allowed onboard unless passengers avail our cabin baggage services,” it said.

One Alan Ong, whose son Adrian Nicolas Ong is a violinist, asked how a violin would be transported as luggage. He was informed by the airline that the violin will occupy a seat next to him. This disappointed Ong, who noted that other airlines did not require buying another seat for a musical instrument and allowed instruments to be loaded on the overhead compartments.

Other professional musicians also objected to the policy after having flown with the airline for years and experienced no trouble for carrying a musical instrument. Jonathan Zuñiga Urbano noted that violins are small enough to fit in overhead cabins “perfectly” and appealed to PAL, “Please extend your kindness to our fellow musicians.”

Violinist Noel Martin also questioned the safety precaution of banning instruments in overhead cabins. “Regarding the notion that violins per se are potentially dangerous to other passengers, I must remain unconvinced since they seem suddenly to become safe once the musician has purchased an extra seat for it,” he said. 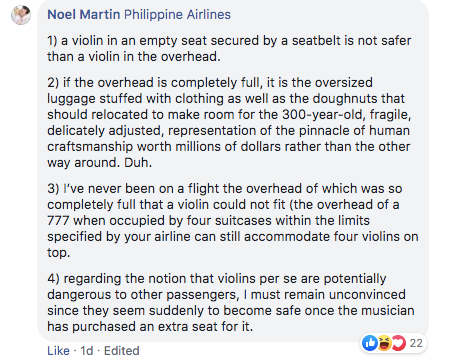 Ice Seguerra similarly bared his frustrations with the policy, stating that in his experience, hard cases containing the guitar get cracked when they are checked in.

Filipino singer-songwriter Joey Ayala injected some humor into the discussion: “Stand back or I’ll play my violin!”  /ra

One fine evening with ABS-CBN Philharmonic