WATCH: Celine Dion pleads to Drake not to get tattoo of her face 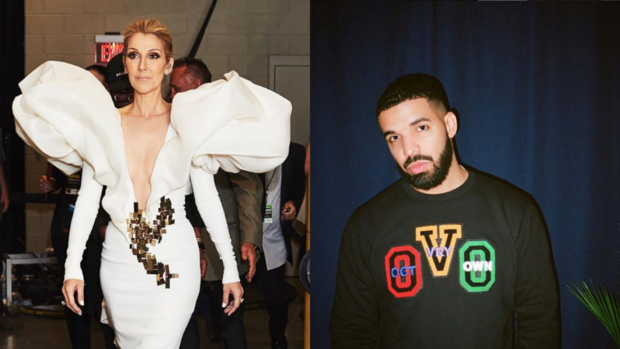 Celine Dion asked Drake to not get a tattoo of her face, after she was reminded of the rapper’s supposed intent to have her image inked on his torso.

Drake was said to have told Dion of his plan while they were at the Billboard Music Awards in Las Vegas, United States back in 2017, as per Billboard last Thursday, Sept. 19. He currently has tattoos of other artists such as Rihanna, Lil Wayne and The Beatles.

Dion made the request when the rapper’s idea was brought up in her interview with iHeart Radio Canada on Wednesday, Sept. 18, as seen in a video posted at the radio network’s YouTube channel on the same day.

“Please Drake, I love you very much,” Dion said in the interview. “Can I tell you something? Don’t do that.”

She mentioned some alternatives to getting a tattoo such as writing her love letters, sending her autographs for her kids, visiting her home for a meal and singing together.

Dion added that her face was not her moneymaker, and pointed out that a tattoo of her face on the rapper’s body would not age well.

“As you go older – you too when time comes – my face will go longer and it will go no prettier,” she said. “So please don’t tattoo.”

Dion then advised the rapper to get a fake tattoo if he decides to push through with his plan, in case he changes his mind about bearing a permanent image of her. Ryan Arcadio/JB

Read Next
Eddie Garcia case: No safety officer, but first aid staff on set – GMA Network
EDITORS' PICK
Metro Manila posts lowest temperature yet this ‘amihan’ season at 19°C
Acer starts the year off strong with the Aspire Vero National Geographic Edition
Over 3 Million worth of prizes to be won at Smart Padala’s SENDali Manalo Promo!
Gear up and get ready to play with Yamaha Mio Gear
DOH: 28,471 new COVID-19 cases in PH; active cases now 284,458
On Day 2 of implementation, gov’t says workers now exempt from ‘no vax, no ride’ policy
MOST READ
Lucky plants to grow in 2022
Derek Ramsay on being married to Ellen Adarna: ‘Gumaan ‘yung mundo ko’
Cristalle Belo on raising her kids in Australia: ‘We set limits’
Unvaccinated has rights but also has limits—DOJ
Don't miss out on the latest news and information.