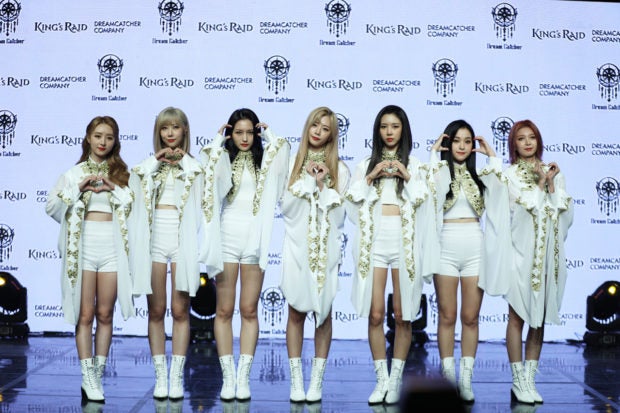 (Dreamcatcher Company) via The Korea Herald

SEOUL — The seven-piece group, famous for its distinctive metal and dance fusion sound, has returned to the music scene with a little twist this time.

The special EP “Raid of Dreams,” which comes nearly seven months after their fourth mini album “The End of Nightmare,” features a total of five tracks including an intro track all produced by Ollounder and LEEZ who the group has worked with since their debut.

To the delight of both music fan gamers, the record itself is a collaboration project with the South Korean mobile RPG game “King’s Raid.”

Naturally, the songs in the EP drew inspiration from the game’s worldview, which are reflected in the lyrics, the video as well as their stage outfits.

The lead single is “Déjà vu,” an orchestra-laden heavy metal dance tune that sees the group do what they do best, but more tamed with melodic piano riffs.

In the face of obstacles in life, the lyrics talk about keeping promises to someone we want to protect at all costs.

During the showcase on Wednesday in Seoul, the band seemed excited about the project crossing two different fields.

“When we first heard about the news that we would release our new work with ‘King’s Raid,” we were very happy. It shows what you’ve said can become a reality. We were just excited to take on a new challenge we’ve never done before,” Siyeon said during the event, alluding that it had been a wish of hers for some time.

The bandmates have all played the game to get a better grasp on the game’s story and though Gahyeon says Dreamcatcher members aren’t very great at video games, they all enjoy playing them.

When it comes to the video for the lead track, JiU also said there are several things to look out for.

“‘King’s Raid’ has three main themes which are ‘doubt, ‘confusion’ and ‘twist.’ I hope you remember them while watching the video,” she said.

Given the collaborative nature of the record, some members went the extra mile to complete what could be quite a challenging task.

“I thought of myself as a game character while making the record. I played the game and even tried to conjure feelings of betrayal (which is one of the game’s main theme) which I applied to my acting (in the music video),” Yoohyeon said.

It’s worth noting that Dal Shabet members — another girl band that has disbanded — was at the event. The group was backstage to lend moral support to Dreamcatcher.

The EP “Raid of Dreams” will drop Wednesday.

Selena Gomez learns how to make adobo in cooking show