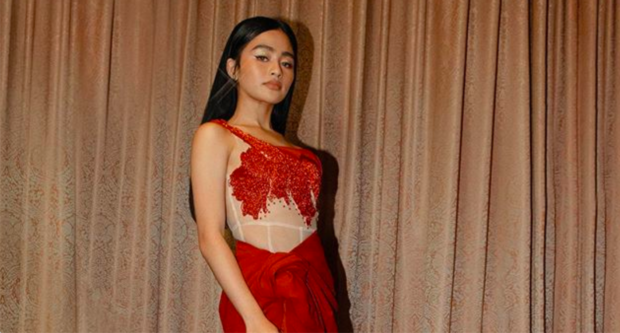 Actress Vivoree Esclito donned an unfinished gown to the ABS-CBN Ball last Saturday, Sept. 14, which led her fans to speculate on the reason behind her attire’s mishap.

Esclito’s stylist for the ball, Vanessa Mercado, took to Twitter yesterday, Sept. 17, to reveal how the 17-year-old artist ended up with an incomplete gown for the event.

Mercado shared the original sketch for the “Modern Filipiniana” dress, which featured one butterfly sleeve on the right side. She also stated how she was diligent in monitoring the gown’s progress.

We weren’t informed about the severity of the damage and everyone was confident the gown will arrive “finished and polished” and on time for the ball. 🤷🏻‍♀️ So let’s all stop these made up stories & end this issue.❤️

Despite the constant follow-ups, Mercado did not see the accident coming. She said that the day before the ball, the heavy beadwork for the top half of the design damaged the gown’s fabric. This led the designer, who goes by the handle of @missdmnq on Instagram, to redo the whole upper portion of the dress.

Mercado also stated that she and Esclito did not expect the gown to be incomplete since they were not informed of the severity of the damage. Thus, the dress Esclito received on the day of the ball did not have a butterfly sleeve and had an obviously incomplete upper portion.

Esclito seemed unfazed by the mishap. She still wore the dress on the ball’s red carpet. She even took the time to express her gratitude to her glam team for staying with her, as seen in her Instagram post last Monday, Sept. 16.

Ultimately, Mercado advised her followers on social media to “stop these made up stories” about the gown and “end this issue.” JB