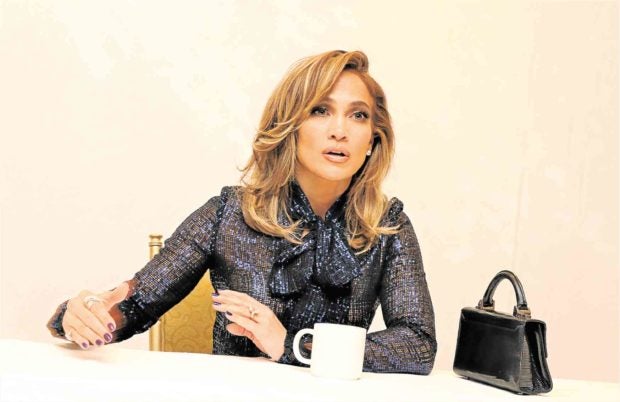 LOS ANGELES—Jennifer Lopez, reminded how she often said, “You know what I mean?” when she was starting her entertainment career, laughed.

“I still say that,” she admitted in this recent interview in Toronto where her film “Hustlers” premiered in the city’s film festival. “It’s a bad habit.” Laughing again, she quipped, “But I also have no intentions of stopping.”

Jennifer and Constance Wu, playing leaders of a group of strippers who turn the tables on the rich men who visit their club in “Hustlers,” are generating acting award nominations for their performances. Based on Jessica Pressler’s New York Magazine article on the true story of pole dancers who embezzled money from stock traders and CEOs, “Hustlers” is directed by Lorene Scafaria.

Below is the continuation of our interview with Jennifer:

Did you practice stripping and pole dancing in front of Alex? It was funny. When I first started learning how to do the pole dancing, the instructor came over [to the house] and she was like, “First of all, you have to take off a lot of your clothes, because your skin has to stick to the pole.” So you can’t do it in sweat pants and a long sleeved T-shirt, which is what I walked in with.

Meanwhile, Alex was in the house (laughs) and he was like, “You are only in your bra and panties?” He comes over. I put on a little bit of shorts and he starts filming, and immediately posts it. So, he enjoyed watching me—the evolution of Ramona.

I was very bruised and beat up by it. I had huge bruises all over my legs and shoulders. I had to train a lot, even in the gym, to gain upper and core strength.

When I spoke to Cardi B and asked her to do the film, I said, “You know this world well. I’m just learning how to pole dance.” She was like, “Oh my God, it took me years. I’m great at it now, but it took me years.”

I was thinking, sh*t, we are six weeks out, and I have to look like I have been doing this my whole life.

But we did it and I had an amazing teacher. Johanna (Sapakie, “Hustlers” lead choreographer) and I put together a beautiful routine which I think was a good introduction for Ramona into the film.

Constance Wu said that if your husband or boyfriend goes to a strip club, you should not be worried because nothing serious happens there. I would disagree with Constance. Worry. I don’t want it.

Can you talk about going to strip clubs as part of your research? Did you go incognito or with your entourage like you have today? In the strip club … we went more low-key. Actually, we set it up. We called the manager ahead of time and went to a quiet booth in the corner. Alex went with me, my sister and a couple of people. It’s not that people didn’t know we were there. They did.

Can you still go incognito now? When was the last time you went grocery shopping? I am not much of a grocery shopper, to be honest (laughs). The last time I went was when my kids wanted to go one day when we were going to bake a big chocolate cookie cake. And we went a couple of years ago (laughs).

Constance Wu also said that you don’t drink alcohol, which could be one of your secrets to looking great. That’s one of them. My mom really instilled in me that I should not drink or do drugs.

I think that (not drinking alcohol) and not smoking help my skin stay young (laughs).

And also from being happy? Being happy always makes you look better (laughs). 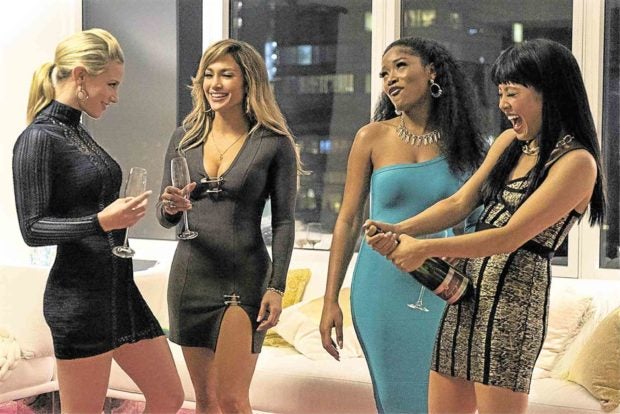 Netflix is going to do a series about Selena. How important was that film, “Selena,” to you as an actress? Doing the movie “Selena” was monumental in my career. I was pretty much an unknown actress, until I scored that part, and they paid me a million dollars.

I was the first Latin actress to get a million dollars for a movie.

And Selena was so beloved. And in the Latin community as well, I became very well-known and then the movie did well. I was nominated at the time for (Golden Globe) best actress.

What advice would you give to the actress (Christian Serratos) playing Selena in the Netflix series? Do your research, that’s what I did (laughs). I lived, breathed and ate that moment.

I worked as hard as I could, to be as authentic and real in the moment and bring that character to life.

The movie is also about friendships. Your kids are at an age where they start having friends. How are they dealing with that, especially having parents who are famous? And how are you with having friends, since you are so busy? I am very fortunate to have a tight group of friends that I have had for many years—20, 30 years—now. That has been a core support system and stability for me through all of this stuff I have been through in my life.

The kids are the same way. They were home-schooled for a long time because I wanted to be with them.

It’s been almost two years now that they are going to school and making friends. I think they’re doing great, doing awesome and happy.

We were all on tour together this summer on the bus all across the United States.

It was like a big camping trip, except mommy had to put on fake eyelashes and sparkly outfits every night to sing and dance. And Emme (Maribel Muniz, her daughter with ex-husband Marc Anthony) sang with me on tour. That was amazing and she’s a great singer. So, it was a very special summer for all of us.

Max (Emme’s twin brother) came home the other day and said, “Everybody is coming up to me in my new school and asking me if you are my mom.”

I said, “Say, ‘My mom is Jennifer Lopez. She is just like any other mom and she does movies and she sings, and that’s it.’”

You said that you need a little break. Can you be in the pool and not do anything? Even when you are relaxing, it’s almost like that’s when you get the most creative, because you have a moment to breathe. Then once you get on a creative flow, you are obsessed with it. You don’t stop thinking about it. Like when you are creating the tour.

I didn’t sleep for weeks before that tour because I would rehearse all day, then I would come home. I would wake up early and call everybody in the morning with all my new ideas.

But I also get so happy and fulfilled when I see the finished product, when I’ve had a successful tour and I’ve shared it with so many people. There is so much joy and love exchanged. That is what I live my life for.

So, no desire to slow down? Not right now. I have so many great opportunities at this point in my life. It’s the best that it’s ever been for me in that sense. I am more confident. I’m getting better at everything that I do and why wouldn’t I?