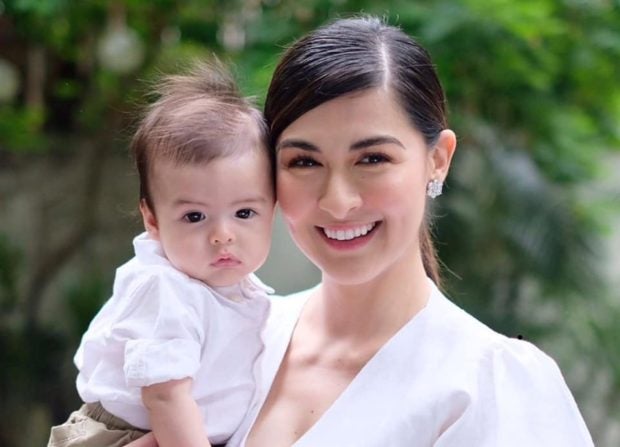 Marian Rivera has reminded her fellow mothers to maintain respect, especially when discussing each other’s parenting styles or choices.

This after being criticized online for feeding her 5-month-old son, Ziggy, solid food, which, some of her followers pointed out, wasn’t consistent with the World Health Organization’s guidelines that state that complementary feeding should start at six months and above.

“I responded to them nicely. But each mom’s situation is different. We all have our own way of raising our children; it’s up to us. But our pediatrician allowed me to feed Ziggy solid food—small amounts—so I did,” she told reporters at a recent press conference for the weekly drama anthology she hosts, “Tadhana,” which is celebrating its second anniversary.

Marian was accused by other people of spreading wrong information.

She stressed, “Let’s all be careful because we could end up hurting other moms out there. Wala namang ina na naghangad na mapahamak ang anak nila. As a mother, you will do anything for your child and give him or her all your love.

“Now, if you believe that [feeding] should strictly start at six months, I respect that. But I will do what I feel is best for my child.”

The 35-year-old GMA 7 star, who’s a breastfeeding advocate, likewise stressed that just because she has begun introducing solid food to Ziggy doesn’t mean she’ll stop giving him her own milk.

“No, definitely not. As long as I can do it and as long as I’m producing milk, I will do it … I breastfed Zia (her first child, now 3) for two years. So there’s no way I wouldn’t do the same with Ziggy,” said Marian, who admitted that she was a little late to the said media event because she had to pump milk before leaving the house.

Marian is now ready to return to work—albeit gradually—starting with her hosting job in “Tadhana,” and later on, in the weekend variety show, “Sunday Pinasaya.”

“I just had to rest a bit after giving birth. And now, I’m back to hosting,” she said. “There’s not a lot of adjustments, really, because I have been doing the show for quite some time now.”

The show, which focuses on the plight and triumphs of overseas Filipino workers, have prepared two special episodes that air in two parts: the Rhian Ramos and Benjamin Alves-starrer “Serial Killer,” a gruesome tale about a group of friends who get trapped in a web of murders in Cyprus; and Lovi Poe’s “CEO Maid,” which follows the life of Myrna, a former seaweed diver and human trafficking survivor, who now heads her own BPO company in the Philippines.

“I’m happy to be back because I missed this show. When I took a break, I asked my husband (Dingdong Dantes) if he could substitute for me, because the show is very important to me and is already part of who I am,” she said.

Because there’s no way Marian will miss any of her children’s milestones as they grow up, she admitted that doing a series is still out of the question at the moment.

“Minsan lang sila maging bata. You have to be hands-on because you can’t turn back time,” she pointed out.

Having said that, it’s also unlikely that Marian will be Dingdong’s leading lady in the coming local adaptation of the popular Korean series, “Descendants of the Sun.”

“They have already selected an actress and just waiting for an announcement,” she said. “Doing that show will be tough, because they shoot in Nueva Vizcaya. Sometimes, they don’t go home for two days. I can’t bring my children there.

“Dong also has a lot on his plate; our schedules wouldn’t jibe, but I’m hopeful that we could work again soon.”

“I’m coming back—slowly but surely,” she added. “If somewhere along the way GMA 7 comes up with a good offer to do a soap, let’s see.”