In ‘Hustlers,’ Jennifer Lopez steals money, and the show

It looks like a flashy, glamorous movie about strippers — all sparkle and skin and high-heels. And it is that. 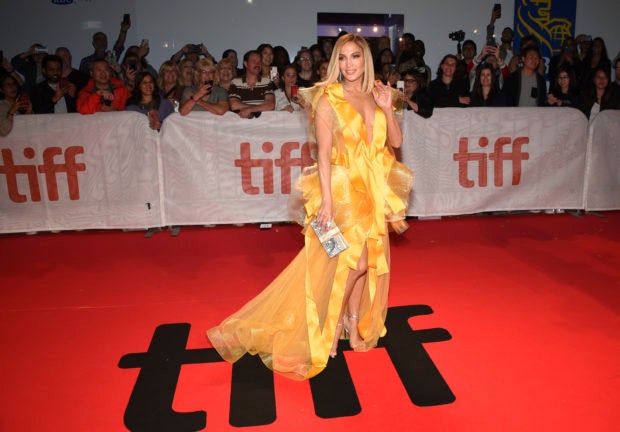 Jennifer Lopez attends the premiere for “Hustlers” on day three of the Toronto International Film Festival at Roy Thomson Hall on Saturday, Sept. 7, 2019, in Toronto. (Photo by Evan Agostini/Invision/AP)

But the fleshy, dazzling surface of “Hustlers,” written and directed by Lorene Scafaria, cloaks an empowering feminist tale about a sisterhood of women who turn the tables on a male-controlled industry.

“People go into the movie expecting something because stripper is a word that has so many connotations and preconceived notions,” says Scafaria. “That’s the hustle. Hopefully we’re subverting expectations but subverting them in a way that has some nuance to it.”

“Hustlers,” opening in theaters this week following its well-received premiere at the Toronto International Film Festival, stars Jennifer Lopez as Ramona, a veteran stripper in New York who takes a young dancer (Constance Wu) under her wing. Ramona organizes a scam to drug Wall Street guys and max out their credit cards. It’s loosely based on a true story, chronicled in a 2015 New York magazine article, and set in the years after the 2008 financial crisis — when far greater, white-collar swindles went largely unprosecuted.

The transactional world of strip clubs — so commonly depicted from a male viewpoint in movies — has seldom been viewed through a female gaze like it is in “Hustlers.” It’s a microcosm, Lopez says, of America.

“It’s all a strip club,” says Lopez. “You have people tossing the money and people doing the dance.

“This film says something about the inequality that we’ve been yelling and screaming about for a while now and kind of making some headway,” she adds. “And I hate saying that so broadly because I love men and there are so many great, supportive beautiful men in the world. But there is this thing that exists that we can’t deny.”

“Hustlers” might be Lopez’s most radiant and regal screen performance, too, since Steven Soderbergh’s 1998 film “Out of Sight.” As Ramona, she’s the matriarchal ringleader of an improvised family of strippers-turned-hustlers. (Cardi B makes her big-screen debut, alongside a cast including Lili Reinhart and Keke Palmer.)

Lopez is, like Ramona, an entrepreneur from the Bronx. She instantly identified with the role, even if the stripping scenes gave her pause.

“It was scary. I saw the script and it wasn’t like boobs everywhere. That wasn’t (Scafaria’s) thing,” says Lopez. “But I also knew I was playing a stripper and I’m a mom and what does that all mean? But I felt good about how Lorene wanted to tell the story and that it was something I could be proud of it.”

Scafaria, the 41-year-old writer of “Nick & Norah’s Infinite Playlist,” observed how much training Lopez put into the part. As experienced a dancer as she is, pole-dancing was something else entirely. Lopez’ resplendent entrance in the movie is a stage dance set to Fiona Apple’s “Criminal” while being showered with bills.

“And I was like, ‘Please don’t. I don’t know what we’re talking about,'” retorts Scafaria, laughing.

In just the past two years, Lopez has released new Spanish-language tracks, launched a cosmetic line, got engaged to former baseball player Alex Rodriguez and recently concluded a 38-concert tour. Time Magazine has ranked her among the 100 most influential people in the world. “Second Act,” released in 2018, proved movie audiences still love her. It grossed $72.2 million worldwide. She’s also a producer on “Hustlers.”

“People think ‘Oh, she’s not a serious recording artist.’ Or, ‘she’s not really a serious actress,’ or ‘She’s not really a serious entrepreneur.’ No, I’m very serious about all of them. That’s why I’ve spent most of my life doing as many of those things as possible,” says Lopez. “Because I do all those things, I don’t get the credit at times — which is fine, I don’t care. I love what I do. I have the most amazing life. I feel good about my life. I feel good about where I am.

“But I’ve had to kind of give myself that pat on my back: ‘You’re doing good,'” she says. “Once I started doing that, my whole life changed.”

“Hustlers,” however, already has a lot of people heaping praise on Lopez. Scafaria says the part of Ramona “fits her like a glove — even if it’s not a glove she’s tried on in the same way.”

The performance has catapulted Lopez into the awards conversation this fall. “Hustlers” may be about a broken value system, but it’s brought renewed appreciation for Lopez as an actor. Lopez, who turned 50 in July, says an Oscar would be “a tremendous moment in my life.

“You dedicate your whole life to doing what you love, and you do it because you love it. But it’s also nice when somebody says, ‘Hey, we think you do it great,'” says Lopez. “I don’t even want to think about it. I usually get tears in my eyes.” /gsg