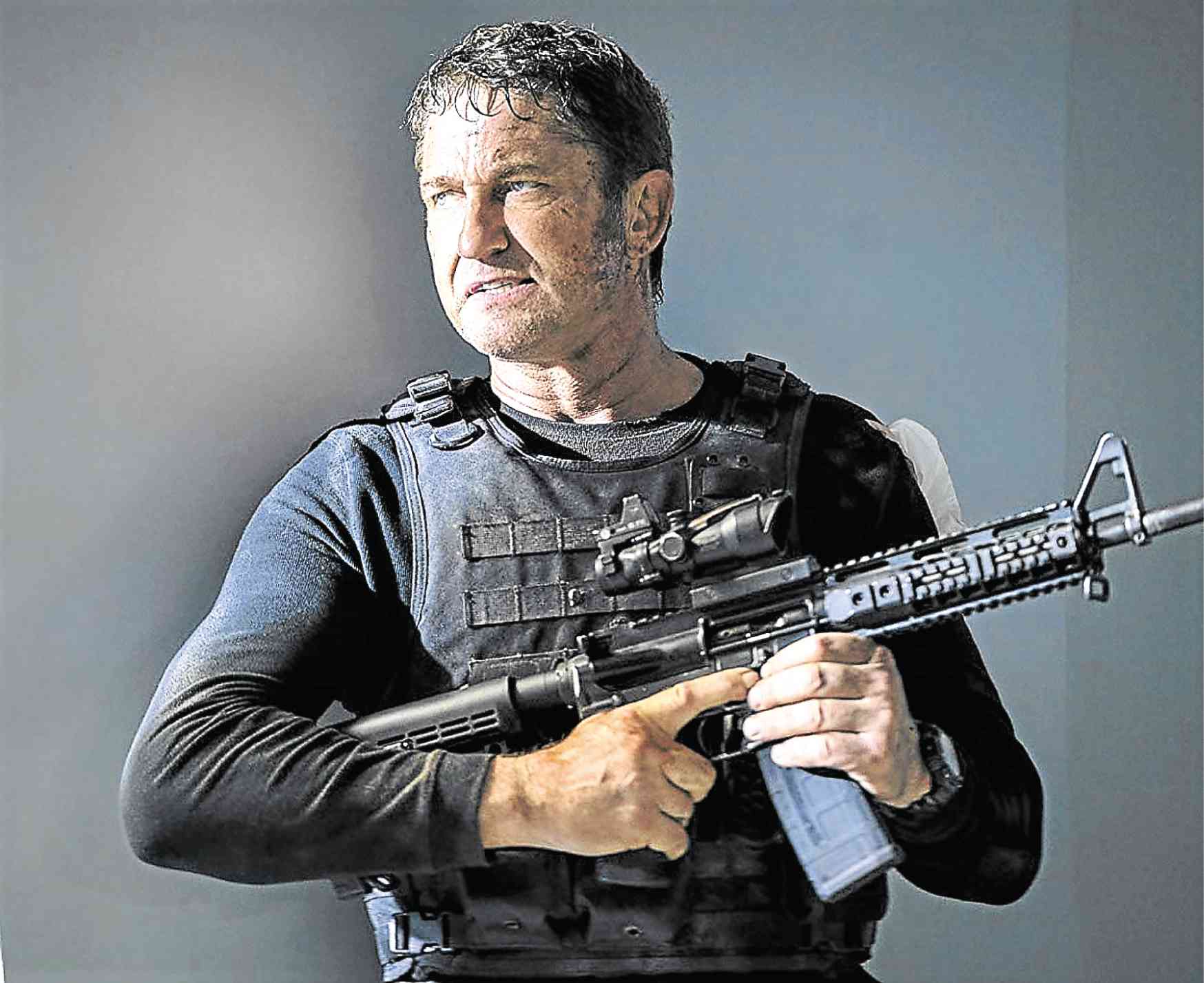 Butler in “Angel Has Fallen”

LOS ANGELES—Gerard Butler was game to talk about turning 50 in a couple of months and all the implications of that in his life and career. But first, he needed an energy drink.

“Yeah, coffee or a Monster drink or something to give me energy,” said the actor who once played King Leonidas. “I’ve just newly discovered this Monster drink, and it’s not as deadly as Red Bull. But it’s pretty effective.”

He is tan, looking weather-beaten—ruggedly handsome like the action star that he is. With a full beard and hair, Gerard is, well, a hairy chap. “I just cut half my hair off before,” said the Scottish actor.

He is back as Mike Banning in “Angel Has Fallen,” the third chapter in Lionsgate’s “Fallen” action franchise. 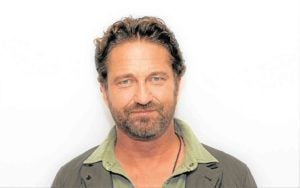 As a followup to “Olympus Has Fallen” and “London Has Fallen,” the new movie sees Mike as a Secret Service agent who must clear his name after being framed for an assassination attempt on the US President.

What is it about Mike Banning that you love and keep coming back to? I love his loyalty, commitment, tenacity, no matter what happens to him. He doesn’t stop. He just keeps coming back. And there’s a lot of fun to be had in that. He has great gallows humor.

But at the same time, he does a lot of the stuff that we wish we could do.

Then, there’s just the joy that I’ve had playing him. We had no idea it was going to be a franchise. No idea it would catch the imagination.

Mike Banning seems to have become quite an iconic hero now in these movies. A lot of people love him.

So, it’s been fun for me to be able to enjoy making a movie that I also know that people enjoy watching. But every time, we’ve taken it to a different direction.

In this one, we took a much bigger gamble to deepen it, give it a lot more pathos, a lot more relationships along the way. It still has all of the action, suspense and fun.

One of the interesting components of this film is about whom you trust. There are trust issues involving the US president and Mike Banning’s friend and former fellow Army Ranger (Danny Huston). In your own life, have you been burned by people whom you thought you could trust? I’ve lived a long life, so yeah, I’ve been burned quite a few times by people. I’m going even back to high school, where I was burned in a way that I couldn’t even contemplate how somebody could think that way.

How you could enter into an agreement based on trust, both do work together, and then them just turn around and say, “By the way, that’s all bullshit.”

That was a big learning lesson. I’ve had that on various occasions throughout my life.

I’m a lot better at knowing whom I can trust and whom I can’t.

So, you understand that the life that I live comes with certain, you would say, requirements or maybe understanding or compassion. That there are certain things that I might not trust about people…

But there are also people where I just sit with, and go, “This is a good person. And I love being around this person because he just passes good energy on.” 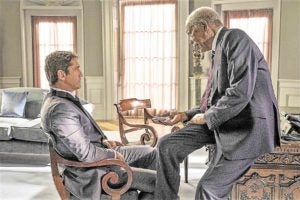 Now that you’re in your “mid-30s” (he is actually 49), does your body still respond to these action roles the way it used to? No (laughs). Next question (laughs). I’m getting to the stage where I have to be more sensible. I’ve worked with a lot of stuntmen, and they all say when I’ve finished with them, “Dude, you commit like nobody else.”

I came into this movie not in a good place. A bunch of stuff happened to me. Motorcycle crashes, a bunch of broken bones in my feet, then my knees torn, problem with my hip, then I had a surgery that went wrong, became five surgeries.

Then I ended up, literally, coming out of hospital, flying here and starting this action movie four days later.

But, I feel I can still do most of the stuff. It’s just the price you pay afterward. When you’re in it, you’re in it. Like when I’m in it, the Scott warrior comes out, so I feel no pain. But the next morning, I wake up and go, “OK, I think my neck is messed up for the rest of my life.”

It’s part of the territory. The only problem is when you’re performing. If you’re a sportsman, you can take time off.

You can’t do that as an actor. So sometimes, you’re in a movie, you might have six injuries going on.

There have been times when I’m doing movies and I could barely walk. And I still have to run and jump. It’s intense.

You have a big birthday coming up in November. What do birthdays mean to you? Where do you think you are in your life right now? I don’t know if I’m in big denial right now, because I’m not thinking much about this birthday.

Then, I just found out the other night, somebody else was born the day before me. And we’re all like, “Should we just have one f**k-off party (laughs)?”

I’ve never been a great organizer when it comes to parties. I’ve had many birthdays when literally, it’s 7 in the evening, I’m forced into calling friends and saying, “Alright. Let’s do dinner at 8!” And we’ll get like 12 people. Then, I’ve had surprise parties.

But the idea of a 50th birthday party and really doing something big? I don’t know.

These last two years have been two of the hardest years of my life, and I’ve had a life that’s not always been easy.

I feel like I’m just pulling out of it now. So, it’s coinciding nicely with that birthday, and this next phase of my life.

I’ve always been nice with people, but I feel like I’m being even nicer and humbler and just appreciating what I’m doing.

Also, not needing to be led by my career anymore. I love to work, but I don’t need to work. If I never work again, that’s fine. And if I do, that’s awesome.

But how do you feel now, reaching the half-century mark soon? I feel good, actually. If you asked me this a couple of months ago, I would have said, I feel a full century. But I feel like in the last couple of months, I’ve come down 50 years. I’m feeling a bit like Benjamin Button right now.

I feel relaxed. I feel like I’ve been very blessed to have the career that I have, and it has just put me in a place where I don’t feel there’s anything to prove anymore, or anything that I have to do.

With everything that you just said, and having gone through a lot in your life and career, when you look back and you were younger, is this all you ever thought Hollywood would be? Less or more? (Sighs) I would say, definitely less. When you’re a boy imagining being in films and in Hollywood, you’re not imagining social media, paparazzi, TMZ, that kind of thing. And the way that people can try and crucify you with lies and indecencies. So that’s the bum side of it.

Then, in other ways, more magical, because then it was just a dream, and often, dreams are beautiful. But they don’t feel anywhere near real.

Because this is what I always wanted to do—take on different characters, be in different worlds. And that part of it, in a lot of ways, is better than I ever imagined it.