LOS ANGELES—“When I showed up, I thought they built this for the junket,” Bill Hader said about our interview location, Heritage Square Museum, in Los Angeles. The “living history museum” of eight 19th century homes evoke Derry, Stephen King’s fictional town setting of some of his novels, including “It.”

Bill stars as the adult Richie Tozier in director Andy Muschietti’s “It Chapter Two.” “It was running through my mind—they said they had no money (for extra production expenses). Then, we had an entire town for the marketing,” Bill said, referring to this location.

Bill, who stars in the TV series, “Barry,” and “Saturday Night Live” and is a voice talent in “The Angry Birds Movie 2” and “Toy Story 4,” thought at first that these Victorian homes were built just for the junket. Only in Hollywood, folks. It is possible for Tinseltown to do that.

With a grin, he added, “And they were, no, these houses were here. I went, oh OK.” The houses, saved from demolition and moved to this museum site, were indeed perfect backdrop for interviews with the talents behind the sequel to the horror blockbuster.

In “It Chapter Two,” it’s 27 years after the Losers Club’s first encounter with the terrifying Pennywise (Bill Skarsgard). The kids are all grown and live away from Derry, but a phone call brings them back.

Excerpts from our chat with Bill, who is married to writer-director Maggie Carey: 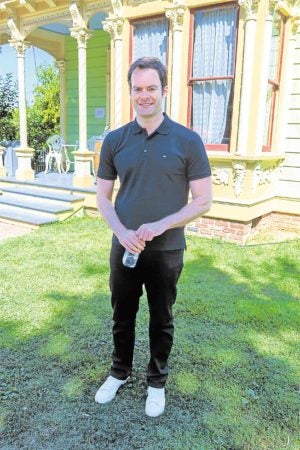 Is it true that it was Finn Wolfhard who wanted you to play the adult version of Richie Tozier? Yeah. He did something. I found out about it. My agent sent me a link to an article about it, that Finn wanted me to play him. I said, “Oh, that’s cool.” Then I got the job, which was crazy, because I was, “Oh, I guess Finn has a lot of power.” I met Finn at the table read and I was, “Hey, thanks for the job.”

Did you study Finn’s mannerisms? A little bit, but it wasn’t like studying him or anything like that. A lot of it was in the script. We have the same kind of gangly, nerdy thing going on.

Why do you think people like to be frightened? It’s a real thing, especially when you’re a teenager—you’re understanding a little more of your own insecurities, fears and stuff. And from when I was growing up, you can’t go out and experience the world so much (laughs).

So, it’s like an adrenalin thrill. It’s a communal thing. There’s also a bit of proving something to yourself. I remember watching horror films and it was like, can you handle this? So it was always like a weird badge of honor—yeah, I saw that.

Do you remember scary stories your parents told you and did you enjoy listening to them? I’ve always liked scary stories. But I remember their stories being things that were on the news—local, some actual true crime stories that would make me nervous.

What was the first horror movie that really scared you? Man, there’s a couple. There’s one called “Fright Night,” which is about vampires.

Then, another big one was the first “The Evil Dead” movie. That was huge. It was very effective, but it also made me want to pick up a camera and start shooting stuff.

What was your introduction to the first “It”? I remembered the book from when I was in high school and thought, oh that’s interesting. So I went with a friend and saw the movie like everybody else. I thought it was great.

When I got the call that Andy wanted to meet me, I watched the movie again just to refresh. When I got the job, I was flying down and the movie happened to be on the plane, too. I’ve seen it three times.

How many takes did you do for those difficult scenes in the water? We did a lot of takes of everything. Andy likes a lot of takes. We’d do it over and over. But he really was looking for something. I don’t mind doing a lot of takes if I understand what we’re trying to achieve and we’re not getting it or OK, we got that, let’s try this version of it.

So on the average, how many takes for each scene? Twelve, but it could be over or under that. I don’t know how many we did. We’d just keep going over and over. A lot of it was for a different coverage and from not being able to shoot two cameras because he was always using very wide lenses.

So that scene in the Chinese restaurant was a whole week of shooting.

Can you talk about working with Bill Skarsgard? He’s an amazing actor. I’ve loved watching him perform. In between takes, he wasn’t one of the method-y type people where they feel they need to be in a space. We were chatting about music and hanging out.

He’s a wonderful guy. He was about to have his first kid (with girlfriend Alida Morberg) while we were shooting, and he was excited about that. I have three kids, so we were talking about that a lot, movies, music we liked and things like that.

What advice did you give Bill about becoming a dad? Oh man, just you can’t plan anything and stay in bed (laughs).

What kind of stories do you tell them? I have some recurring characters … I make up stories and tell it to them.

You have your own show. And you write and direct. What fulfillment do you get from being a hired actor? You see other people work and also, you have the pressure off in a weird way where you only have to focus on one job instead of five. So that’s great. And to get the chance to play a different character, too, and not have to just always worry about the one guy.