After leaving 6Cyclemind, Ney Dimaculangan not out to change his distinctive singing and songwriting styles 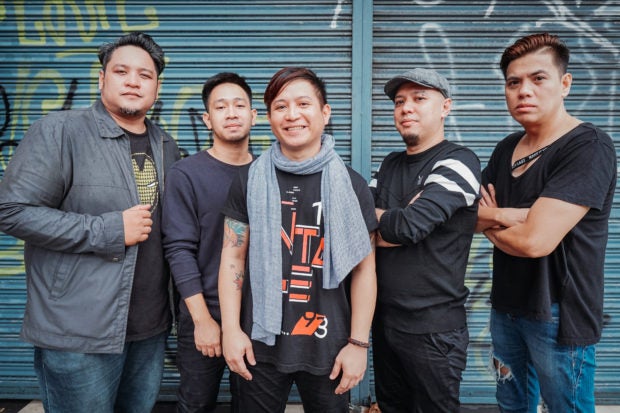 Ney Dimaculangan (center) and his band

Pursuing a career in mainstream music after leaving 6Cyclemind in 2011 was no straightforward march for its former lead vocalist, Ney Dimaculangan. It was tough, he admitted—like starting from scratch.

But with a little help from drummer Andrew Nianga, bassist Lui Lopez and guitarists Patch Sanchez and Arnee Escobedo—the musicians who would comprise Ney’s current eponymous group—the singer never once felt that he was in it alone.

“You just want to work. But sometimes, you couldn’t help but feel down with everything that’s happening. But they always have my back, boosting my morale,” he told reporters at the recent launch of Bandang Ney’s latest song, “Bahala Ka.”

“We have been through a lot. More than the music, it’s the brotherhood that binds us together,” said Ney, who briefly went solo before forming this band. “I really can’t say anything more about our relationship.”

The band members have been playing for almost seven years now, and they believe that all the time they spent together, writing music and performing onstage have helped them evolve as artists.

“We have became more mature when it comes to the songwriting process and the elements we put. It’s not about trying to show off or making sure there are astig parts,” Patch pointed out. “If the song needs something simple, then that’s what we do.”

The new single, “Bahala Ka” (Alpha Music), is an honest-to-goodness pop-rock offering. But the breezy touches of ukulele and harmonica make an otherwise familiar-sounding tune fresh. “It’s an old genre, but the way we did it is new; different from what the fans are used to,” Ney said.

With “hugot” songs still as popular as ever, the band made a conscious effort to come up with something bouncy and happy-sounding.

Songs about feeling down

“We want to spread positive vibes this time. Many songs these days are about feeling down, being alone. So, we just wanted something different. You may be sad now, but you still go on; while we have problems, we can channel them into something positive,” Ney said.

But, more than the sound, it’s his vocals—powerful and with a slight edge—that make the song undeniably his.

However, it’s also this distinctive tone that makes it hard for casual listeners to disassociate him from 6Cyclemind, for which he sang the hits “Prinsesa,” “Aaminin,” “Upside Down,” “Sige” and “Biglaan.”

“When I was based in Dubai, where I sang for a while, I would meet or chance upon Filipinos. And I would hear them saying, ‘Uy, si 6Cycle, si 6Cycle!’ They know the band, but not me, necessarily,” he related. “But that can’t be helped, because that’s a fact.”

Still, he doesn’t feel the need to deliberately change his style of singing or songwriting to make a new stamp. “I don’t think I should change that, because what comes out naturally—that’s me,” he said. “Be true to yourself when writing songs, go with what you really want to communicate. And when you do that, you can’t go wrong.”

At this point in his career, Ney is no longer preoccupied with thoughts of chasing hit songs. He continues what he does simply because he loves it. “From Day 1, it’s all about passion—wala namang yumaman dito,” he jested, laughing. “We just hope to continue sharing our music with everyone. Even if we’re not here anymore, the music will remain.”