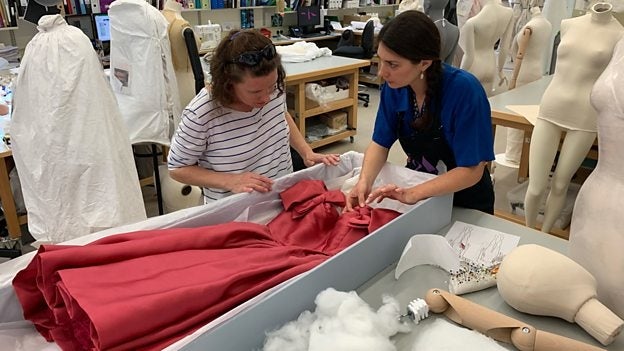 BBC Two recently announced the upcoming documentary series “Secrets of the Museum” which will explore the inner workings of the V&A museum. Image: courtesy of the BBC via AFP Relaxnews

BBC Two recently announced a six-part series going behind the scenes at one of London’s most iconic art institutions, as per The Guardian.

“Secrets of the Museum”, which is produced by Blast! Films, will explore the work of the hundreds of curators, conservators, and technicians of the Victoria & Albert museum.

The documentary series, due to air in 2020, will reveal the “tricks of their trade” as they conserve, clean, loan, acquire, and display some of the museum’s two million objects.

The V&A is renowned for its eclectic collection of artefacts spanning over 5,000 years of history. Among them are Grayson Perry’s Brexit vases, Kylie Minogue’s traveling wardrobe, and Charles Dickens’ original manuscripts.

According to the BBC, each program will uncover the hidden stories behind several objects at the V&A, “from how it was made and why it matters, to the important job of the museum to keep these stories alive for future generations.”

Alistair Pegg, Blast’s director of program, said that filming the inner workings of the V&A was “a documentary-maker’s dream.”

“[W]e’re looking forward to bringing a side of the museum to life that visitors never get to see; from discovering some of the thousands of items kept in the stores, to revealing the expertise and dedication of staff working to preserve and protect a huge range of wonderful objects,” he added in a statement.

As reported by Art Newspaper, the V&A is one of the most popular art institutions in the world, attracting nearly 4.0 million visitors in 2018.

“Our aim at the V&A is to champion creative industry, inspire the next generation and enrich everyone’s imagination. We hope this series will inspire a new generation of designers and makers, museum-goers and day-trippers to fall in love with the V&A and its remarkable collection,” said Tristram Hunt, the museum’s director.

The museum recently announced that it has acquired a series of objects exploring the design identity of global activist group Extinction Rebellion, which calls for urgent action on climate change. JB

Prince Harry concerned about impacts of humans on environment, wants ‘maximum’ of 2 kids