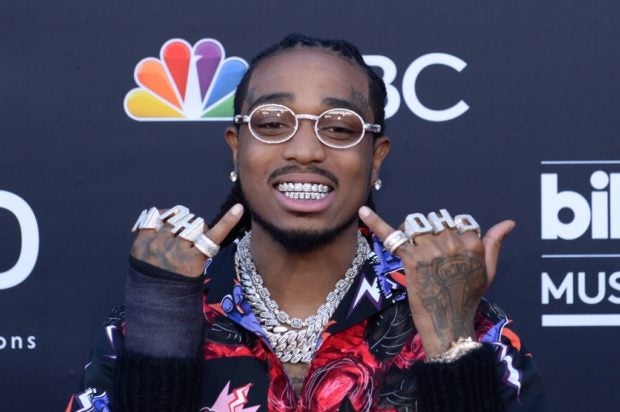 American rapper Quavo points to his grill as he attends the 2019 Billboard Music Awards at the MGM Grand Garden Arena on May 1, 2019, in Las Vegas, Nevada. Image: AFP/Bridget Bennett via AFP Relaxnews

Quavo is developing a forthcoming animated franchise series “rooted in the world of Atlanta’s hip-hop music and culture scene.”

Although details about the still-untitled project remain scarce at this point, the program will be targeted towards children aged 8 to 12.

Quality Control chief operating officer Kevin “Coach” Lee teased that the forthcoming series will be “educational and positive, but with the dopest visuals and sounds our rap culture can provide.”

In a statement announcing the news, Quavo shared details about the project, which will “definitely reflect the creativity, love, and families” of his native Atlanta.

“I have long seen how hip-hop as well as [Migos’s] music really impacts kids. I have loved animation my whole life whether on TV or in movies, and I wanted my first jump into this premium content world to be a show just for kids,” he added.

This is not the first time that Quavo pays homage to his hometown in an animated series. Last January, the rapper partnered with Adidas on “Only in Atlanta” for the Super Bowl.

The series followed a fictional team, known as Five Points Crew, about to engage in the “greatest” 7-on-7 football game ever played.

Quavo is not the only rapper breaking into animation. In July, Kid Cudi announced that he has teamed up with Netflix for a new adult animated series based on his highly anticipated new album, “Entergalactic”. HM/JB